Few people visiting this site have probably heard of Japanese entertainment culture magazine ROLa. Recently, it gained a small amount of traction in the English speaking world due to an interview of Sailor Moon creator Naoko Takeuchi. The latest issue to hit Japanese newsstands held something far more interesting for eSports (and fighting game) fans: an interview with Evil Geniuses Fighting Game Division member Yuko “ChocoBlanka” Kusachi, who was recently selected as one of the magazine’s top 100 influential women of Japan for her work in growing the eSports movement in the country.

Few Street Fighter fans following the international scene haven’t heard of ChocoBlanka. A fan of gaming since childhood, the 29-year-old began her ascent into competitive gaming relatively recently, being first introduced to the world of fighting games as a third year university student. She eventually began a competitive career with the original Street Fighter IV in 2008, and quickly found her niche wielding the electric wildman, Blanka — a character known for mix-up guessing games and punishing opponents’ mistakes.

After graduating from college, she began a career in the automotive industry outside of Nagoya…but couldn’t get the gaming urge out of the back of her mind. She eventually ended up leaving the corporate world behind in order to spend more time focusing on building a career out of gaming — traveling to and hosting events, taking part in exhibitions, gathering professional players, and becoming a renowned part of the local fighting game scene in Nagoya and beyond.

Through a period of intense training, she quickly racked up several notable victories over the next few years (including a certain famous match against pro fighting game player Mago), became the first female champion of GodsGarden, and soon found herself signed to Evil Geniuses in 2011 along with her partner (and current EVO 2015 Ultra Street Fighter IV World Champion / 2015 Capcom Cup Qualifier) Yusuke Momochi. Fun fact: the happy couple actually met for the first time in an arcade — making them a true real-life example of relationships blooming on the (digital) battlefield! They were also the first two Japanese players to be signed to the organization, making it abundantly clear the Fighting Game Division was ready to go global. 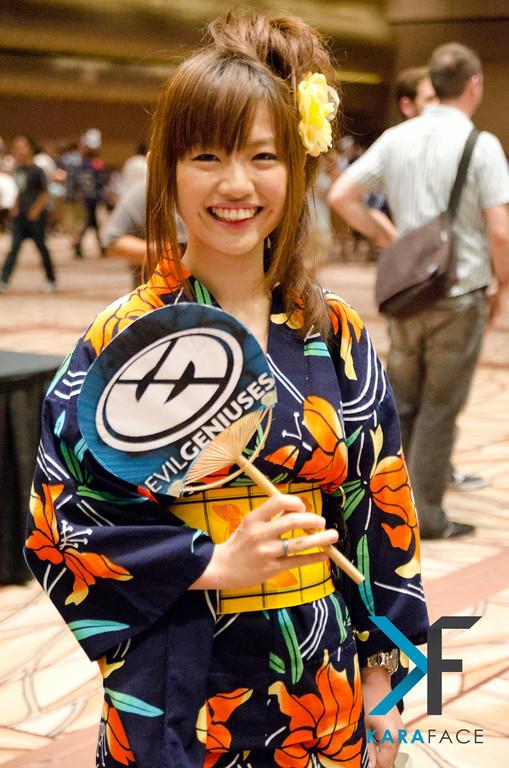 As a part of Team EG’s Fighting Game Division, both Choco and Momochi became regulars on the world’s competitive stage, traveling to events in Asia, Europe, and the Americas. Everywhere they went, they received a warm welcome. Female fighting fans in particular found Choco’s story inspiring. Stories of her worldwide adventures and experiences are routinely posted on the MomoChoco blogs [http://momochoco.net/] and [http://momochichoco.com/], where readers and fans can tune in to hear the latest news or find links to training videos put together by the dynamic duo.

One example of her work: while not competing on stage at this year’s Tokyo Game Show, Choco recently found time to go onstream to teach a coaching session for Street Fighter newbies that is now accessible on YouTube.

While Choco herself continues to participate in worldwide competitions, streams, and blogs centered around Street Fighter, she has recently devoted a lot of time in a promotional role, bringing eSports to the mainstream through a variety of channels. For example, August’s Tokyo Offline Party, which brought together some of the region’s best Street Fighter talent for a laid-back set of exhibitions and provided fans the opportunity to receive coaching time and tips from Choco and Momochi — or a relatively recent appearance on famous Japanese morning show ZoomIn! Saturday during which she talked about the rise of pro gaming as a career.

She also appeared on several web entertainment programs like Union Times, teaching general audiences the basics of competitive games like Ultra Street Fighter IV in an interesting, non-intimidating manner. The Union Times appearance is particularly amusing as Choco attempts to teach the hosts of Union Times the basics of Street Fighter, and fighting game fans should give the segment a watch even if their knowledge of Japanese language is limited or nonexistent. Wherever there is a camera lens focused on the eSports movement in Japan, it’s a fairly good bet that Choco can be seen there, working hard to raise the profile of professional gamers, Street Fighter, and eSports in general to a growing worldwide audience made up of gamers of all ages and experience levels. 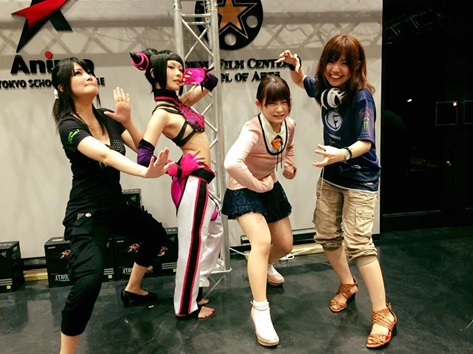 Before moving to Tokyo last year, Choco and Momochi also hosted and competed in a set of tournaments in Nagoya’s now-closed Game SKY arcade — an ancient, tiny venue tightly packed with wall-to-wall fighting game cabinets owned by a kind old man who welcomed visitors with open arms (and plenty of open spaces at cabinets of all shapes and sizes on which to hone their skills). Game SKY was a relic from another time that was home to some of the most passionate Street Fighter players on Earth, and Choco called it her home arcade for a long time before its shutdown earlier this year. Nowadays, she calls the arcades among the city streets of Shinjuku her main training grounds.

eSports is gaining traction in Japan with the growing popularity of League of Legends and Dota2 competitors, but it’s the fighting game scene that resonates best with Japan’s arcade-centric culture — and that’s where Choco can bridge the gap. While tournaments have been around in Japanese arcades for nearly as long as competitive games have existed, the concept of major funded tournaments (and players making a living earning proceeds from those tournaments) is a concept that is generally new to many people overseas. While trade schools in Japan are beginning to offer courses on subjects like pro gaming and commentating, major events are racking up hundreds of thousands of views, and major companies like Sony are pumping investment into the worldwide competitive scene, eSports is still relatively young — not only in Japan, but worldwide as well. As investment in the movement grows, more faces and voices like Choco are needed to guide the adoption of eSports into popular culture, both in Japan and around the world.

Choco is definitely a fierce competitor as well as a wealth of Street Fighter knowledge, but she views her mission in a slightly different way: as a professional gamer, her goal is to “convey the fun and excitement of professional gaming to people all over the world.” To those who know and follow Choco — as well as to ROLa and its readers — it’s clear she’s doing exactly that.