Post written by sponsored streamer/YouTuber TiensiNoAkuma. Check out his channel and stream here and here!

With the new season finally up and running we’ve seen a ton of adaptations made to the champion meta. Champions that haven’t been seen in a while have come out of the woodwork, specifically those who bring tanky stats and high damage stats. Currently the most popular and considered most “overpowered” are Mundo and Shyvana, other champions that I highly recommend to play during the current meta are Warwick, Olaf, Volibear, and Nasus.

So what changes turned these champions into complete monsters? It was simply the mastery changes; what Riot did was provide Health Regen, Spell Vamp, Lifesteal, Damage reduction, 3% Max Health Gain, 10% Crit reduction, 3% AOE Damage Reduction, and Free Armor/MR based on the number of surrounding enemies. These are all available in the tank mastery tree, and is the reason for the nigh unkillable tanks in the current season. With that in mind, if you have an unkillable tank who can deal decent damage, then you have something that would be considered problematic. You will notice that the above mentioned champions all have ridiculous damage output, Mundo Q deals 25% of current health, Shyvana deals 2% of max health per auto attack, Warwick Q deals 16% of max health, Olaf deals true damage which has reduced cooldown per auto attack, Volibear has a nuke that deals 30% of his max health and can be increased based on the enemy’s missing health, and Nasus has a Q spell every four seconds that can increase it’s damage indefinitely. 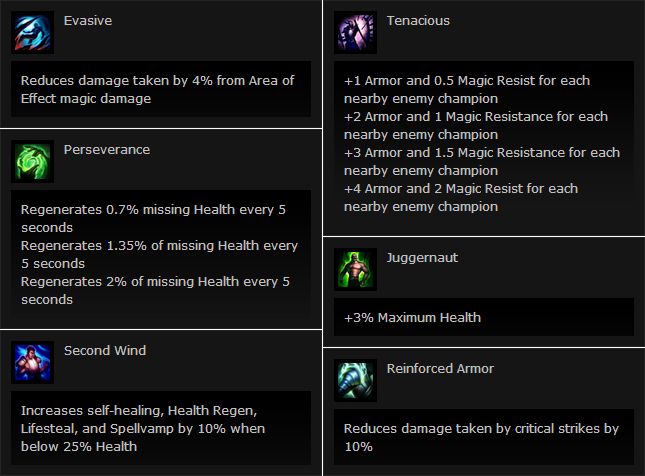 This is the tank meta, hopefully Riot won’t nerf these champions into the ground, but instead buff other champions to even the playing field and keep this game interesting.

The primary issue at the current moment isn’t necessarily the tanks, but how Riot has attempted to deal with it. They have increased the damage output from the offensive mastery tree by more than 10% compared to last season. This is fine for dealing with tanks, but unfortunately there were negative side affects. The people who receive the short end of the stick are the squishies, champions who naturally have little health and have no reason to build it. These champions were already decimated last season by assasins, and with the 10% damage increase, they’re disappearing even faster by burst champions such as Gragas/Riven/Annie/Kha’Zix etc. Unfortunately Riot has already begun the nerf hammer fun-fest and these champions are seeing nerfs very soon.

I hope the changes in the future will bring champions up to the power of what’s currently considered “Overpowered”. Instead of nerfing them into “Normality”. Because what fun is there in a game when there isn’t something you can stare at and say “Wow that was ridiculous”.