Amidst all this pressure and stress a lot of people in the eSports industry have been suffering from, I wanted to take a look at the bright side by taking a trip down memory lane. When I look back at where I started and where I am now, I can be proud of myself. League of Legends was the first thing in my life that truly defined me. It allowed me to grow into a better version of myself, even going as far as inspiring others to do so as well. I’m so grateful to every single fan or enthusiast of the game for giving me the chance to do so. I may not have time to answer every question, take every photo, or sign every mousepad, but I’m so grateful that you all care so much. Inspired by this gratitude, I wanted to take you guys back to some of the fantastic crowds I’ve had the chance to interact with during my career.

My first real vivid memory of a massive crowd I experienced was at the Taiwanese Regionals, where TPA secured their spot to the Season 2 World Championships. They would later end up winning that season. We were flown in by Garena to play a promotional match as CLG.EU against TPA, and the fanbase was just massive. As we arrived to the giant mall, it was completely surrounded. Supposedly there were 15,000 people outside trying to get in, when in reality they couldn’t because there were already more than 25,000 people inside. I could try to explain the magnitude, but a picture will do this more justice. This was one month after I dropped out of college completely to chase my dream of becoming a pro, and it showed me I made the right choice. 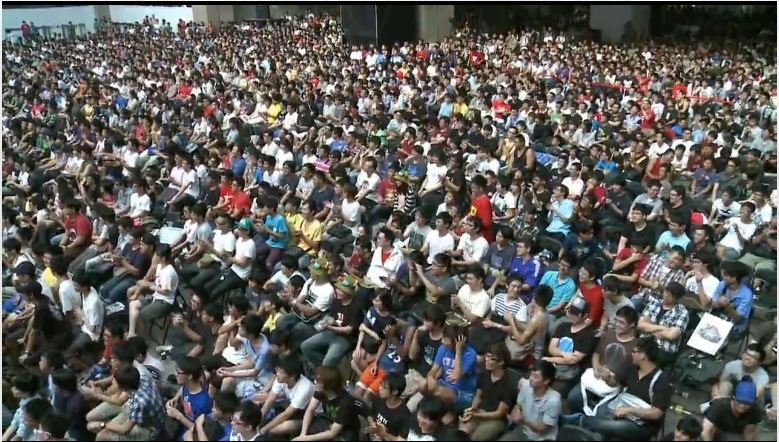 For me one of the best League-related memories will always be the two businessmen we found walking around with a little hand-held fan with CLG.EU and Azubu Frost logos printed on the opposing sides. These two older, fully suited-up, gentlemen that had nothing to do with esports whatsoever just found themselves in the middle of it all when they passed the venue where we would be playing.

What came next none of us really expected. We played the Azubu, the champions of the Summer 2012 finals in an open-air war memorial in front of a whopping 12,000 Koreans. It was such a beautiful day and it showed us the fruits of our two month long labor in Korea. Sadly, we didn’t become the first western team to take home a cup on Korean soil, but damn we were close!

There were plenty more unforgettable moments like Gamescom 2012, Gamescom 2013, or making an entire Staples Center laugh with a silly joke on the Analyst Desk. However, the chills you get all over you when the crowd cheers for you or your team is what you play for. It’s a feeling you’ll never forget and will always cherish.

A pleasant surprise was the LCS trip to Lille in 2013. It proved that more people don’t necessarily mean a better crowd. Roughly four to five thousand overenthusiastic Frenchies confirmed to me that they’re awesome as a crowd (later proven again at All-Stars 2013). I got to greet them in my best French and was warmly received. Merci.

I could go on for hours on end about all the positive experiences I’ve had the joy of being part of so far in my career, but then this blog would never end. I just want to offer a profound thank you to all the fans out there that make an effort to show their appreciation. You might be part of thousands, but your effort is appreciated, every single one of you.