This blog has been divided up into two parts. You can read Part 1 here. Part 2 is below:

ESL One Frankfurt.
I think a lot of player and tournament interactions are overly negative so I’m going to try to be as constructive as I can and also go over the positives first. Before I start, I would like to say that I think every TO I’ve talked to has been pretty receptive to ideas and that I think that any divide other players/TO’s feel is more of a communication issue (same for casters and players really, but that’s another blog I think).

Positives that other tournaments should all try to copy or adapt as a standard:

1. SSDs for players.
I think this has come up again and again, but this solution (also used last year at ESL Frankfurt, TI, Summit, etc.) is perfect for reducing setup times and ensuring players have good settings for playing.

3. Easily accessible food for players.
Perhaps a bit healthier food would be favorable for me, but honestly there are professional athletes who only eat McDonald’s chicken McNuggets during the Olympics and they win. As long as I don’t have to spend a lot of time looking for food I can eat and not practicing/watching/preparing, I’m happy.

4. Dedicated practice area for players.
This is probably self-explanatory.

5. Set time to meet with fans.
I think every Dota pro wants to interact with their fans. This gives an easy way to do that. I hope they do it during TI5. This allows fans to get some cool swag (a signed poster at Frankfurt) because it’s more formal and organized. Also, it’s way more time efficient than random people approaching you.

6. It was in a stadium.
That’s really cool. This is probably not something most tournaments can standardize. It was especially cool because the fans went crazy and the event had additional things to do for fans. I don’t really know what the reception for the balloons, bull ride, etc. were, but that concept about it being an event more than just the games. Always having something to do during downtime is really nice as well. Not everyone is a fan of every team and wants to watch Dota for two days straight. Also, the stadium is pretty isolated.

7. Solid internet during the main event for games.
There are not many tournaments that have it together as much as ESL did during the main event. There were minimal pauses that could be blamed on ESL, and when there was one (lights in eyes), they adjusted them. That’s actually a bit of a rarity in esports events to be honest because it’s pretty easy for something to go wrong (especially at least a slight ripple from DDOS).

8. High quality sound cancelling headsets with white noise, microphone, and direct voice communication.
I wear glasses so if I have in-ears, a headset around my neck, and a sound cancelling headset, my ears are ready to fall off by game two. Gaming headsets are perfect for my everyday use (and likely the everyday use of everyone who reads this), but they aren’t made for 10,000 yelling people in a relatively close proximity. I mean they probably could be, but that would be an unnecessary consumer expense. I loved that we didn’t have to use an external communication program and that there was no latency during communication as far as I could tell. The only bad thing was that it was hard to adjust sound (even with max Dota volume it was a bit low), but I think this was the first time I’ve never had the crowd/casters echo into my Teamspeak.

9. I really like my ESL hoodies.
I have two of them and they’re the only esports hoodies I wear outside during a non-esports event. They’re cozy approved. ESL gave us one in a goodie bag, which is always nice.

Negatives
I’d like to just acknowledge that ESL had to transform their event very quickly because of unexpected rain and problems outside of their control. They did an excellent job of adapting to that. They probably had to switch priorities and move staff around because of this which led to things like #7 happening. As a side note, I think almost all of these are pretty easy to fix:

1. Hotel
There were different hotels for some teams, so I can only talk about my own. As an aside I think it’s preferable to have every team in the same hotel, but that’s not really important. I’m not particularly picky about my hotel. The only things players should really care about are whether they can sleep, download replays, and watch games. I was unable to watch any games or download replays using the hotel internet, which was problematic for players. I don’t know the logistics for this or whether this is even possible.

2. Wifi at the venue
Players use wifi to both communicate with their team and prepare for games. This is important.

3. Internet routing
It was hard to download replays at the venue because everything but gameplay was routed through a VPN. Really awesome in that there was no DDOS/lag in-game, but just a slight adjustment for next time would be nice.

4. Tournament format
The #1 thing I think people don’t want to see and players don’t want to play is useless games with teams not trying. I really like the fact that the higher seeds could choose opponents. That makes it so there are no games you want to lose to avoid playing a certain opponent. The trade off this tournament is that the lower half of the bracket’s positions didn’t matter. 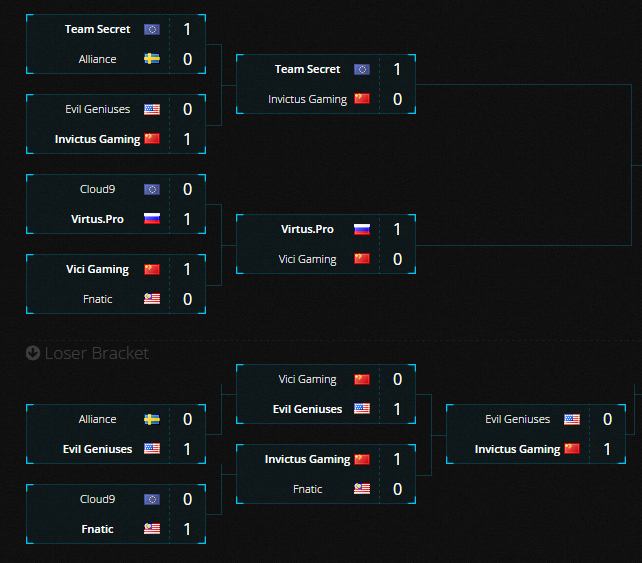 In my opinion, the way to make group stage games all matter is to reward high finishers and to punish lower finishers. At the same time, I think that at an event like ESL Frankfurt, you also have to think about the audience. I wouldn’t want to travel to the event to not even see my favorite team play because they were eliminated in groups. I think something like a slightly staggered bracket combined with top finishers getting to choose would be good for me (bot 4 loser’s bracket / top 4 winners or something). In regards to single elimination, I think there’s something to be said for the excitement of that format. While players should want the best team to win, single elimination probably provides a better viewing experience as upsets are exciting. I think I am okay with it as long as the group stages are good.

5. Group stage play settings
The group stage play settings were the worst part of this tournament. There were two rooms of two teams playing. Both teams were extremely close and you could hear your opponent’s communication and yelling. Teams were also not required to use soundproof headsets (i.e. iceiceice was like 2 meters from Suma1L and could understand everything we said–he told us he wouldn’t act on the info and I believe him because it was a sort of meaningless match, but that’s a flawed set up). There was also a panel of casters in the same room as one of the games. They are loud and they make it hard to play. The internet was also unplayable with random spikes throughout the entire group stage.

6. Making players wake up really early and rush to do nothing.
Why should players have to wake up at 6:30 or 7 especially after some very long flights? Then they have to wait for the bus for a while. Once they arrive at the venue, they have no PCs so they just sit around until the matches start at like 11 or 11:30.

7. VP’s practice area
It should not be in the cold and different from everyone. Heaters were forgotten, but as aforementioned ESL had to deal with some unexpected circumstances. Easy to fix I think (Note: ESL didn’t forget the heaters, they were just slowed down by having to waterproof everything so the heaters came late).

Overall, I really liked ESL one, and I think in general LANs have gotten a lot better. There will always be things to improve, but it’s only looking better for the future.