The Adept is a unique little butterfly of a unit. When it first emerged in LotV, (closed beta), I was excited at the idea behind it. A light, harass unit with some cool mechanics like its ability to shade jump seemed really fun and functional. I was quickly saddened by the fact that while aesthetically pleasing, and cool in concept, its performance fell the way of the early reaper. It had some purpose in early game harass, but even in this primary role it did not exceed. After that part of the game, it fell off into nothingness and was completely irrelevant in competitive terms. Any time a new edition to a game comes out, and the new and exciting units are introduced, our hopes are high. When this unit under-performed I felt double the disappointment.

Fortunately, that disappointment is no more. I don’t necessarily want to call it “overpowered”, but it is nearly an army staple at this point. The Adept in this latest patch for LotV finds itself as a mainstay of most mid to late army compositions. With the shield buff it received coupled by its shield upgrade, we are gifted with a strong tankish unit that can deal decent ranged damage, and operates like a gem with most Protoss army compositions. It still has the low cost of 100 minerals and 25 gas but deals ranged damage and tanks damage better than almost any other unit the Protoss can field except for maybe the Immortal. One of the real secret sauces to this unit though is its ranged damage. The synergy here with force fields is fantastic, but also it keeps the Adept mostly out of harm’s way from another Protoss constant AoE threat in Psi Storm. 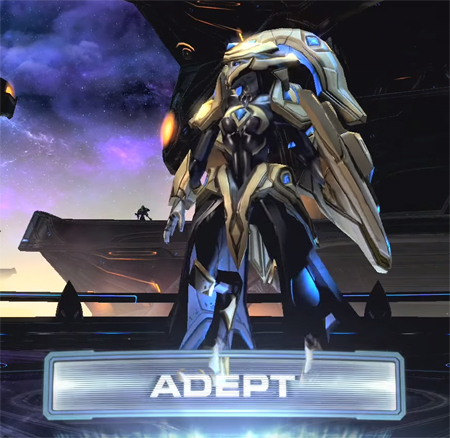 I want to break down the specific matchups you will see the Adept and where it will show up:

In this matchup, it has a lot of early game threat due to its particular effectiveness against light units. This was mostly intended to make it a worker harass unit, but this also means it does fairly well vs Zerglings and even Queens to a certain extent. After that the Adept continues to function as an infantry unit that almost replaces the Zealot. Working in conjunction with storm and force fields means more of them will survive and the collective “death ball” army of the Protoss will maintain integrity earlier and longer. That said, the Adept has a nemesis and right now it is the Lurker. If almost any number of Lurkers are found in the game, the Adept is rendered fairly useless. Look for Disruptor use or a Protoss air armada for an answer here.

Again, the adept again functions as an early game threat in this matchup. With mostly Marines as the first line of defense/offense for the Terran player, the Adept finds itself as the alpha predator. The nice thing is as the game progresses, unlike in PvZ where the Lurker makes the Adept more of a liability, we see the Adept flourish from early game to mid game and beyond. Make sure to get the armor upgrade, perhaps before blink, but not necessarily always that way. Blink still has fantastic offensive options, but almost more importantly defensive capabilities against drop play. Adepts tank damage from Marines “ok”, but really excel in rendering Marauders all but useless. The damage gets no bonuses and their slow attack rate means the Adept wades through that onslaught with little to no fear. Supplement your adepts with the usual sentry, immortal, stalker and templar. Disruptor play is nice and perhaps colossus can be added, but I recommend you steer clear due to their nerfed state.

Finally, this matchup sees them act much in the same way as they do in PvT, but perhaps their effectiveness is even more realized in this matchup. Adepts can be susceptible to early game blink all-ins as they don’t have the benefit of their upgrade(s) yet, and their low range/attack rate means a mass of blink stalkers can whittle them down. I find that if you get past this stage, however, Adepts en masse are a terrible thing to deal with for the opposing Protoss player. If they have AoE like Disruptors, Collossus or perhaps storm they have the tools necessary, but Zealots, Stalkers, Immortals are all but a waste here! Mass your Adepts and remain aggressive so you can keep tabs on the opponent’s composition. If they go for Disruptors make sure to split up your army for minimal losses and perhaps go for Immortals/Stalkers to support the Adepts…or just MORE Adepts.

The Adept is a truly powerful little tank of a unit and I highly recommend you play around with it. I think one of the untapped potentials of the unit is the function of the projected shade walk used with the massed army of Adepts. We’ve seen it with small numbers but what can we do with large ones? Should be fun!