All in all, engagements by Zerg should now be much more carefully taken, as the risk of a misstep is much higher than before. Stray mine shots, and mine shots that are target fired are hard to dodge, but are much easier to deal with and avoid if engagements are taken directionally. An example of a directionally taken engagement is such as the image below. 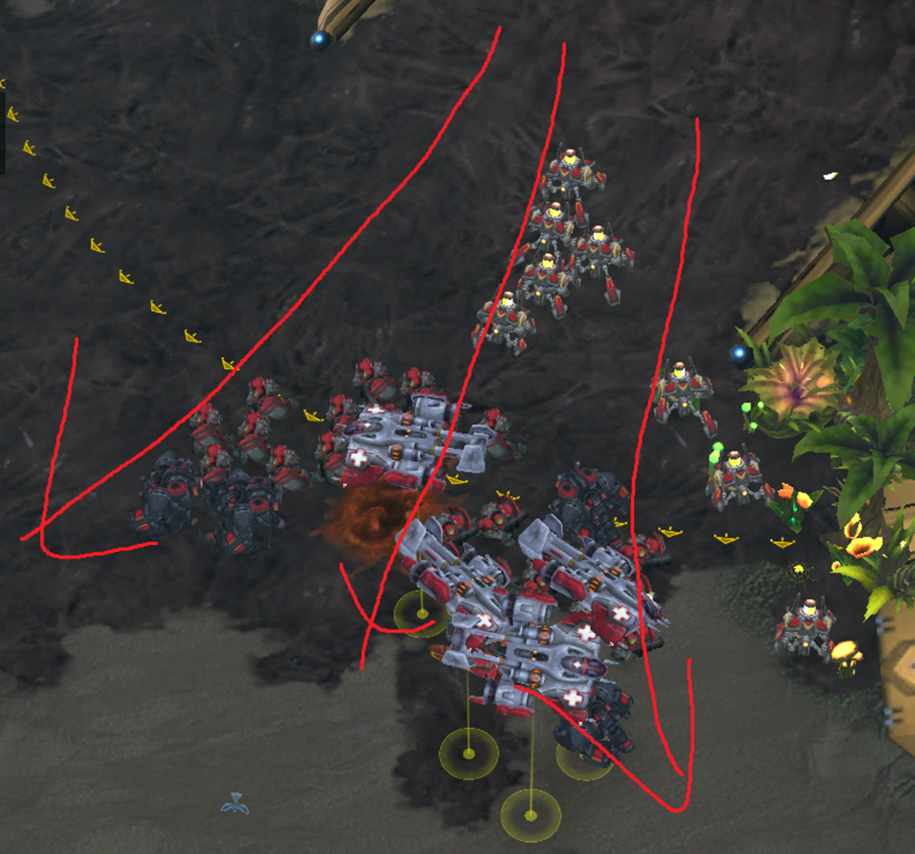 Of course a flank is always best, but sometimes time, position, or whatever doesn’t allow a flank (although keep in mind you should be wary of players that lift and boost away during a flank, and potentially all your lings and banes dying. If you identify that your opponent is lifting, or will lift, or you don’t need all your units to finish the bio, peel away parts of your army that you don’t think are already targeted by mines, and let the small portion of your army eat the mine shots, giving you a much greater cost efficient engagement). In all other circumstances, taking an engagement directionally greatly increases the probability of mine shots going towards the bio which is splitting and stimming in the same direction, hitting reinforcements, ensuring that lings don’t regroup in with the fight (which is what happened in the TLO image above) and bring the mine shots back to the group.

The change in target priority makes it much more difficult to come out in even standard mid-late game engagements with your muta ball still intact as it was when the engagement started, even if you win the engagement with a “landslide victory.” As the thor numbers increase to numbers of 3 or higher, infestors begin to be mandatory in order to be able to win fights. Muta clouds are easily hammered, and mass banes are much easier to deal with. It looks like zergs are going to have to be splitting both lings banes and mutas now when the thors come in with the bio.
But the bigger issue: mech. Going swarm host muta is now significantly more risky than before. With the thor target fire, mutas get blown out of the sky, any direct engagement is suicide, and harass is now riskier than ever. It looks like brood lord viper infestor, perhaps with some other units will now be more of an option vs mech, or some other swarmhost variant.

This nerf decreases the strength of protoss aggression and allins, but by how much? It depends on the situation. In a direct engagement of something along the lines of a gateway based allin, it greatly helps. If your opponent is attacking with pure blink stalkers or zealot stalker, the 20 second time decrease gives you a lot more breathing room and maneuvrability. However, in a scenario such as sentry immortal, time warp aids in securing forcefields. Once your units are stuck or trapped by forcefields, the time warp has done its job and it’s not helping any further. 10 seconds is all they need for this, and hence the nerf isn’t exactly useful here. In large scale engagements, where forcefields tend to be less prevalent as well as useful, the time warp nerf helps moreso. Of course, forcefields can still be used, and to great effect in mid-to-late game fights, the matter of the fact is your army will be bigger, and the time warp will affect a smaller percent of your army, especially if you choose your engagement wisely and fight in a strong positon.

This has been the new patch and its impacts on Zerg in a nutshell. I’m Samuel “Midday” He, a Zerg player proudly playing for compLexity Gaming. Special thanks to Sound Blaster, Creative, CYBERPOWERPC, Newegg, DXRacer, Corsair, Twitch, Scuf Gaming, and Pwnit Wear.