Blizzard Entertainment has been hitting gamers with- well, a blizzard. A blizzard of news that is; I mean between new information about The Grand Tournament for Hearthstone players and the announcement of the next and FINAL expansion for Starcraft II Blizzard had announced at Gamecom 2015, there’s a lot of news that needs to be covered. So for a Blizzard Recap on what’s been revealed the past couple of days, here’s all the Blizzard news you need to know.

Blizzard officially announced that the release of Starcraft II Expansion, Legacy of the Void, will be coming out this year. In sad news, it’s also been unveiled that this will be the final expansion for Starcraft II unfortunately concluding the end of the Starcraft II story BUT not ending the Starcraft II universe, meaning players will still be able to play the game they know and love for at least a little while longer. In more positive news, this expansion is set to have a cooperative mode known as Allied Commanders. This mode will allow you to play as a heroic commander of the Raynor, Kerrigan and Artanis race and Blizzard states that these missions will require teamwork and accomplishing the task would be “impossible alone.” So yay for the power of friendship!

If you’re still a loyal WoW subscriber, Blizzard salutes you. Unfortunately they have 1.5 million people they can no longer salute. After announcing its biggest quarterly drop of 3 million subscriber just 3 months ago, WoW has made little progress and continues to see its member count fall. We’ll have to see if the next expansion, which will be announced at the next Gamescom, changes anything, but for right now, Blizzard needs to focus on retaining their fan-base before it completely depletes.

Lucio is the newest member to the cast of Overwatch and his beats are SICK!! This musician utilizes sound waves to give himself speed boosts, energy shields and powerful blasts to take out his opponents. He was previously leaked before Gamescom after someone discovered music dedicated to this character, but he was officially revealed and he looks promising. Additionally, Blizzard also revealed two maps called Volskaya, a small industrial town with an ominous atmosphere, and Numbani, a futuristic city surrounded by fresh, green grass. Also Battle.net reportedly had Overwatch on their starting menu as of today. There’s no play button, but it could signal a beta test coming soon.

If new characters were not enough for Overwatch, we’ve also go some new characters coming to Heroes of the Storm. Kharazim, Monk of Ivgorod from Diablo, Rexxar, Fighter from World of Warcraft, and Artanis, leader of the Protoss race in Starcraft, will all be joining the fight in the Nexus. In addition, the Diablo-themed map, Infernal Shrine, is in development, but it is announced to have 3 lanes and unique shrines players will have to defend in order to summon a Punisher, which is a monster that will help push the lane out for your team. If anything, more maps mean more strategies and for gamers, a diversity in strategy is always welcomed.

Blizzard gave us more information at Gamescom as to more incentives to engage in Ranked play even after you get level 20. In addition to the usual card back, Blizzard now provides more prizes the better rank you achieve every season. These additional prizes include Golden Cards as well as Dust you can use to enchant your cards. Blizzard also revealed a TON of new cards for the upcoming Grand Tournament which you can check out in the picture below. We’ll be posting a list of all the cards of The Grand Tournament once the set has been revealed so keep up with us for that in the near future. 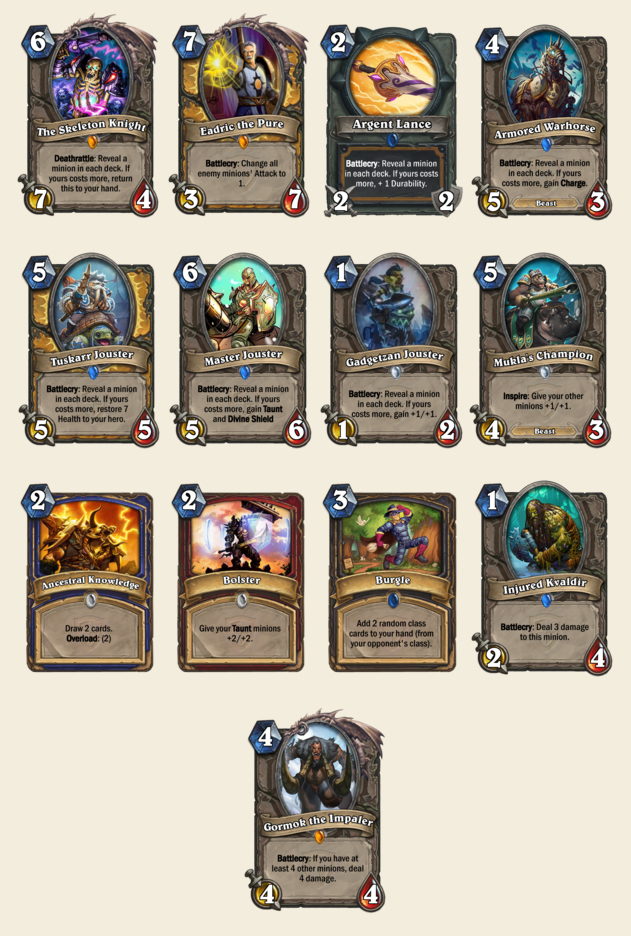 For all Blizzard gaming news, keep up with cpgaming.gg.