After years of grinding out appearances only to fall short, Evil Geniuses finally come home with the title of World Champions winning The International Dota 2 Championships.

Things started to look grim when EG entered the Loser’s Bracket after losing to Chinese underdogs, CDEC. Faced with a crushing 2-0 loss, EG had their backs against the wall with only a single lifeline left. Still, they continued to fight, surpassing LGD gaming in their matches winning 2-0 to stand and fight against CDEC once more. And this time they were ready.

By the end of the day, EG has come out victorious, standing tall with their 3-1 win over their rematch with CDEC and taking home a total of 6.6 million USD. This marks the first world title that EG has ever won and after coming so close last year, taking second place and TI4, this victory just feels right.

This also puts EG the highest ranking on an entirely different ladder. After their victory at TI5, EG places at the top of money made by any eSports organization totaling their winnings to just over 11 million dollars. Crawling behind them is former Dota 2 World Champions Newbee, who trails behind at around 5.6 million dollars. 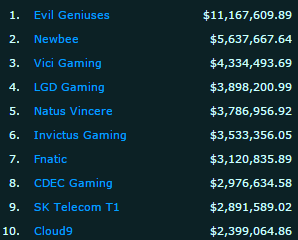 Overall Evil Geniuses have a lot to be proud of after working hard the past two seasons. Now, they can finally take a well-deserved break before gunning for a title repeat next year. For all your DOTA 2 news, keep up with cpgaming.gg.