According to Patrick Moorhead, who writes for Forbes focusing on technology and usage model, Intel Core M was based upon Intel’s 14nm manufacturing process node and was the company’s first 14nm part, the first Broadwell part, and could get as low as 4.5 watts, enabling fanless designs.

The new processor helps build premium performance, better visuals, and extend battery life. The process shrink from 22nm to 14nm which allows Intel to build a 1.3 billion transistor processor with the Core i7-5600U at 82mm which is 35% more transistors in a 37% smaller die size compared to the Core i7 4600U with the Haswell 22nm architecture. Battery life on laptops can extend as much as 1.5 hours longer than laptops using 4th generation Intel Core technology. 3D-graphics rendering has improved by as much as 22 percent, while performance in its traditional strength of video encoding has leapt up by 50 percent. Intel Hyper-Threading Technology allows the processors to handle more tasks at once, while Intel’s WiDi wireless streaming feature can now stream full 4K video. 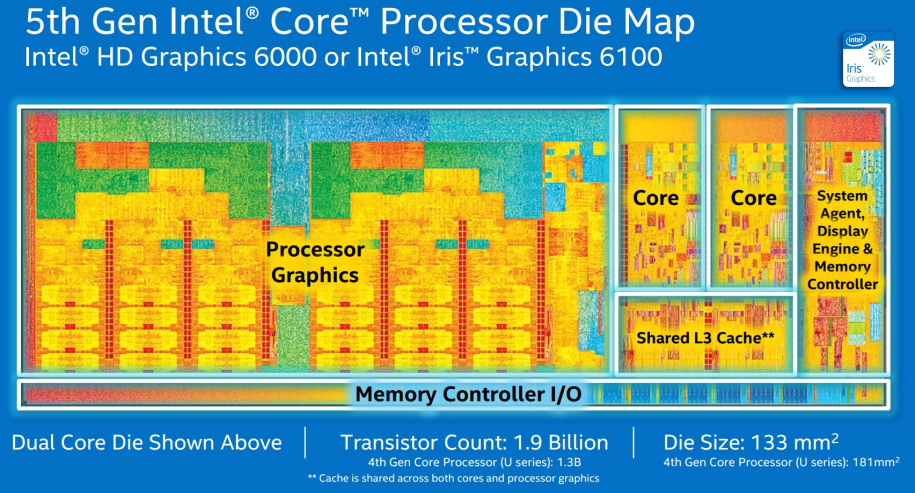 In additional, the 5th generation processors require no wires and no passwords capabilities, and voice assistants when paired with Intel RealSense 3D technology,

Intel RealSense 3D technology brings features like gesture control, 3D capture and edit, and innovative photo and video capabilities to devices. With a vision for a “no wires” experience, Intel Wireless Display (WiDi) v.5.1 and WiGig wireless docking provide users more control over their experiences by allowing them to compute and share from virtually anywhere without the clutter of wires and cords.

Intel’s voice assistant technology allows the users to control thier PCs using voice commands, and now includes Wake on Voice5 technology, which awakens your PC with just the sound of your voice.