The first story-based add-on for Sunset Overdrive, The Mystery of the Mooil Rig, is out today.

Sunset Overdrive is an open world third-person shooter video game developed by Insomniac. Players wall-run, use zip-lines, and grind rails to swiftly navigate through Sunset City, and have a large weapon arsenal to use in action in order to fight the OD, humans transformed into mutants after consuming an energy drink.

The  Mystery of the Mooil Rig is packed with new story missions, 2 weapons, 2 Amps, 1 trap, 2 vanity items PLUS new quests, challenges, Chaos Squad missions, a Night Defense base, as well as a new boss. It includes a “floating playground” which provides the players with more missions, challenges and abilities. When a distress signal cries out from a Mooil Oil rig off the shores of Sunset City, Bryllcream emphatically asks for players help investigating. 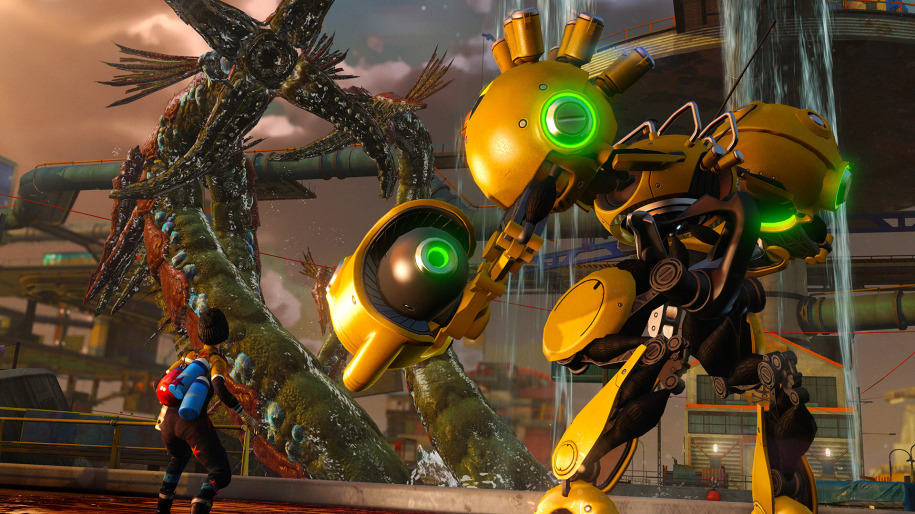 According to the Dec. 16th Sunset TV, two new weapons were introduced as part of the upcoming Mystery of Mooil Rig DLC.

The first weapon is called Rivet Blaster which gives an Area-of-Effect attack when fired. If fired directly at an enemy, it will stun them for a while and inflict moderate damage.

The second weapon is aptly named Feel The Burn, which is a flamethrower that deals continuous fire damage to enemies.

You can now get The Mystery of Mooil Rig DLC for Sunset Overdrive for $9.99 and no extra charge If you own the season pass.