It’s time to stop whining about getting wrecked by Ekko because Riot has just announced the newest addition to the League of Legends cast. Tahm Kench: The River King plays the role of a utility tank adding a strong presence both offensively and defensively. With the right timing and correct team composition, this gluttonous monstrosity will swallow his opponents whole leaving nothing but their skeletons on the rift.

Still confused? Going into T.K’s abilities will make it much easier to explain. Starting from the top, Tahm’s Q, Tongue Lash, is a skillshot that launches his tongue in a target direction stopping at the first enemy it hits. Tongue Lash damages and slows whatever target is hit, but stuns enemy champions if they have three stacks of An Acquired Taste. The mind games really start with the River King’s W, however. His Devour ability allows him to swallow…pretty much whatever he wants. He can swallow minions and spit them out toward enemy champs to do damage, he can swallow a teammate to make them temporarily invincible until Tahm or the teammate chooses to leave the king’s stomach, all while gaining movement speed if walking toward enemy champs, and if the enemy champion has three stacks of An Acquired Taste, Tahm Kench has the ability to swallow them, greatly reducing their vision and Tahm’s movement speed, but when spit up will recieve a hefty damage from the power of royalty. As a king, T.K must make sure that he has protection so he can rule the river. But he doesn’t need guards, he’s got Thick Skin. The king’s E is a dual ability with a passive which converts the damage he’s taken into grey health, which when he leaves battle, will disappear but restore a portion of his life depending on the amount the damage he’s taken. The active on the ability simply converts the grey health into a shield, which although quickly disappears, can be a powerful shield depending on how long the fight lasts. Finally, we reach the king’s best ability, which is combination of both Reksai’s and Kalista’s ultimates. Tahm Kench’s R, Abyssal Voyage, allows him to transport himself and another teammate to a designated location. Not only does Abyssal Voyage have great range, it also comes with a passive making the king stronger the more health he has turning him into a powerful tank that can virtually pop up into battle at anytime. 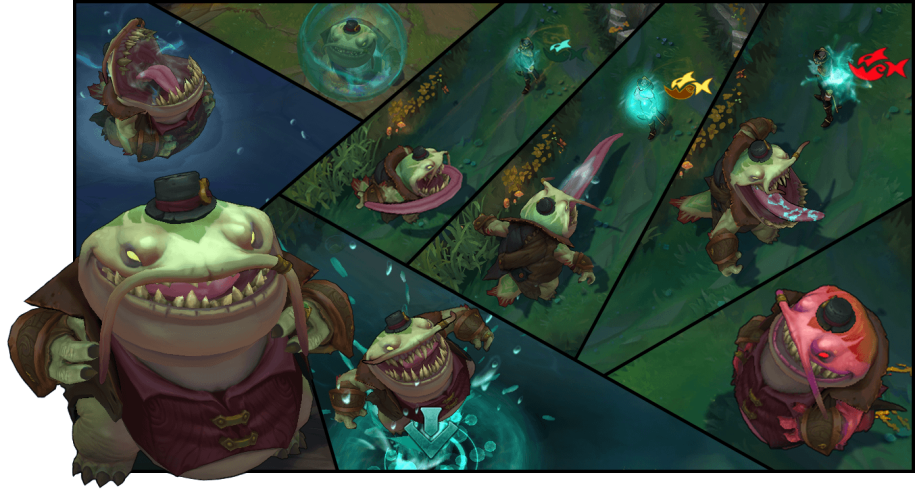 Tahm Kench’s versatility makes him viable in both the top lane and the bottom lane as a support. His utility makes it incredibly easy to protect the team’s ADC while being to put out consistent poke. He also has the ability to take hits due to his Thick Skin and since his ultimate lets his power scale off health, most people will probably be tanking up with this guy anyways. His ultimate makes him a universal threat at all times ensuring that the enemy team is on their toes whenever the skill’s off cooldown and since he can bring a buddy with him, the amount of strategies and synergies that form with the king are endless.

All-in-all, it looks like there’s another threat that summoners have to deal with on the rift. The utility Tahm Kench brings will offer insane strategies players can use all around the map. Just like all initial releases, nothing can be certain until we get specific stat distributions, but if Riot follows its recent trends, I’m certain that this River King will make a huge impact on the rift.

For all things League of Legends, keep up with cpgaming.gg and for more information on the Tahm Kench, check out Riot’s Champion Reveal .