As an ardent Dungeons & Dragons aficionado, I used to scoff at the mere mention of anything Warhammer. Whether it be Games Workshop’s pencil and paper role-playing systems (which aren’t around anymore) or the tabletop board/miniature game, Warhammer Fantasy Battle. For one, the high fantasy snob in me just couldn’t quite understand the appeal of the overly exaggerated physical proportions of Men, Orcs, and Dwarfs on display. They seemed like something out of a He-Man cartoon.

The inclusion of gunpowder in Warhammer’s universe was also a big no-no, as far as my haughty fantasy geek friends and I were concerned. Come to think of it, we were sort of like High Elves in our temperaments when it came to Warhammer. Truth be told, however, another big obstacle for me trying WFB out was the exorbitant costs of purchasing even a modest-sized army of miniatures. They were out of my price range. I figured that they were only for rich kids. That was until I saw that most of the people buying them were adult males. 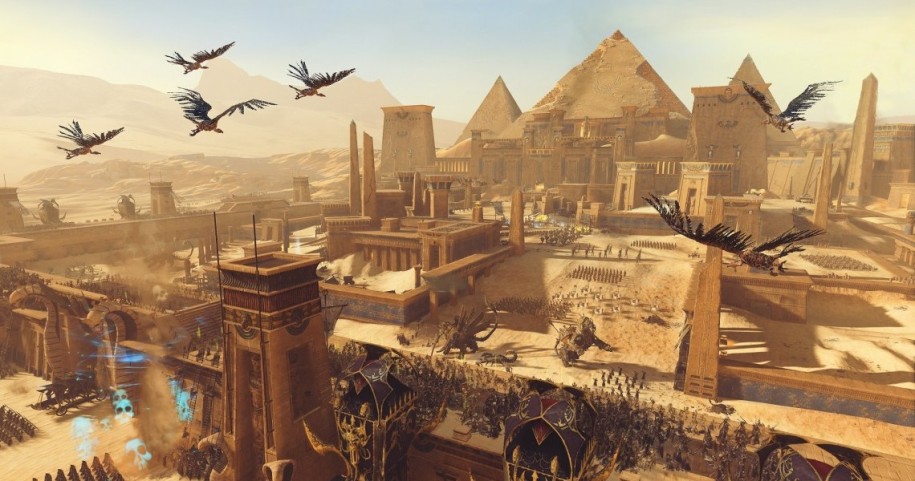 No, my first foray into any of Games Workshop’s products was in video game form. Warhammer 40K: Dawn of War was simply one of the best RTS’s made, and totally won me over as a fan. Of course, it was only natural that I’d become eventually become curious about the fantasy contingent of the Warhammer universe (at least in the digital realm).

I was totally blown away by Creative Assembly’s video game adaptation of WFB, the first Total War: Warhammer. I was even more excited when TW:W2 came out almost a year later. What struck the most about it was that not only did the universe have all of the usual high fantasy staples, such such as Orcs, Elves, and Undead, but it also had races that were more esoteric, such as the filthy rat-men (Skaven) and the ferocious Lizardmen.

One race that I didn’t even know about until they were announced as a DLC for TW:W2 was the Tomb Kings. I did some quick reading up about them via Wiki, and in no time very intrigued by them. Far from the more traditional high fantasy moorings of the Warhammer universe, the Tomb Kings had a distinctly Egyptian vibe which was undeniably cool.

It also didn’t hurt that their backstory—one of betrayals as well as long-awaited come-uppances, was not only unique, but also could have served as the backdrop for an entirely separate game. Total War: Warhammer 2: Rise of the Tomb Kings is the best DLC I’ve seen so far from CA. It religiously follows the history and ancient lore of the faction, and ingeniously distills it all into video gaming mechanics.

The King of Kings, the eternal patriarch Settra the Imperishable has arisen from his dust-caked slumbers and is on a mission to restore the former glory of his lands, Nehekhara (Egypt). The only thing is that instead of waking up as the handsome devil he was buried as, he wakes up as an animated mummy. Now that would seriously piss anybody off. I don’t care how morbid or masochistic you are.

You can take the role of one of four Legendary Lords this time around. Besides Settra, you may play as the High Queen Khalida, the Vampire-loving badboy Arkhan the Black, or my personal favorite, Grand Hierophant Khatep. You see, Khatep was the leader of the cult which presided over finding the path to true immortality, within Settra’s original kingdom. 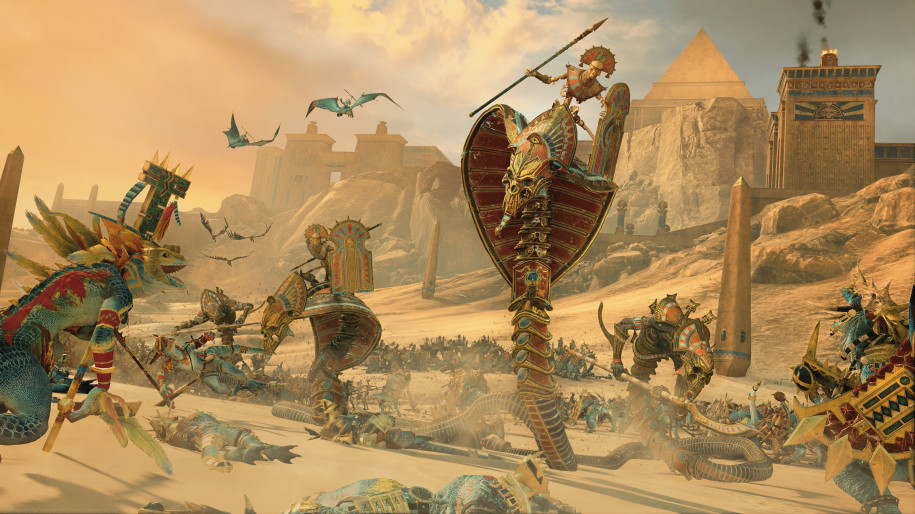 As Settra’s health began to fail (after so many attempts at trying to imbue him with immortality), Khatep swore that he would find the necromantic secrets that would extend his life. He didn’t. But as they lowered Settra’s body into a grand tomb (along with all of the members of his still-living entourage), Khatep promised that he would raise Settra from the dead someday. He did, but not quite how Settra had envisioned the whole ordeal. Hence, Khatep was banished from Nehekhara for his failures.

While Settra was sleeping, Nagash, his main rival (and the creator of necromancy within the Warhammer universe), killed off all of the people in Nehekhara and turned them into the undead. As a result, instead of getting some fleshy Nehekaran soldiers as infantry, you get a bunch of dusty skeletons. However, no upkeep is required for the armies of the Tomb Kings, since they’re…uh…dead.

The brittle skeletal troops that you field are mere cannon fodder for your real power players, your constructs. These include a couple of different varieties of sphinxes, some animal-headed badasses called Ushabti, and one of the best creature designs I’ve ever witnessed in a game—the gigantic Heirotitan. 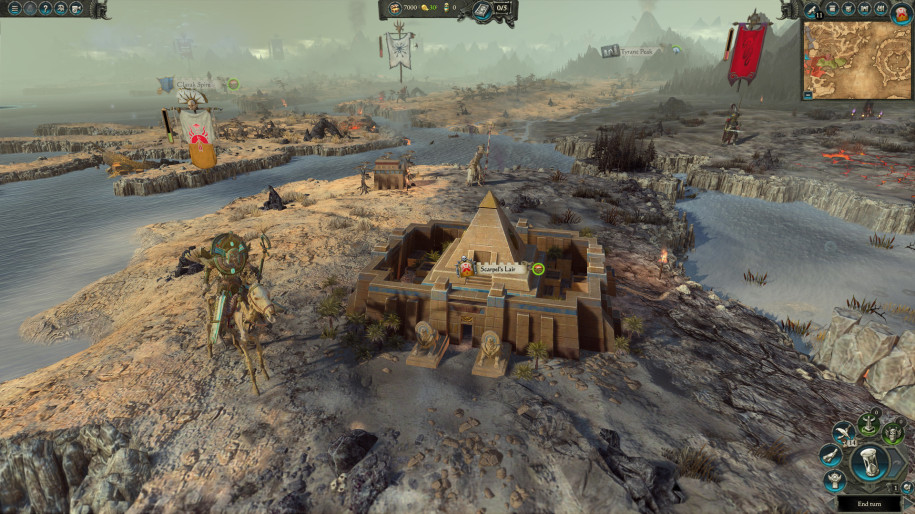 The Tomb Kings aren’t necessarily concerned with the Vortex as are the other races of TW:W2. The four Legendary Lords, as well as all of the other lesser Tomb Kings, are hell-bent on collecting the five Books of Nagash. Gaining possession of these cursed books gives you a chance at controlling Nagash’s Black Pyramid, and hence, ultimate victory.

As a person who enjoys a more reserved playstyle (I love the Dwarfs), I like playing as the Tomb Kings because they don’t seem designed for conquests outside of their borders. Indeed, when I left the desert lands of Nehekhara, I found that the surrounding territories were inhospitable to my armies as far as the climates were concerned. When I did venture forth on quests for the Books of Nagash (the ones outside of my lands), any towns or cities that I conquered I simply razed to the ground.

Thus, Tomb Kings are tailor-made for a more defensive style in battle. I frequently found myself jamming up any attackers with my skeleton troops, and would then flank around their forces with my powerful constructs. And the best part was when enough of my troops were destroyed, I’d unlock the Realm of Souls. As your forces are killed, a meter fills up, and when it reaches a certain threshold you can spawn Ushabti anywhere on the battlefield (one of the best places is behind enemy lines). 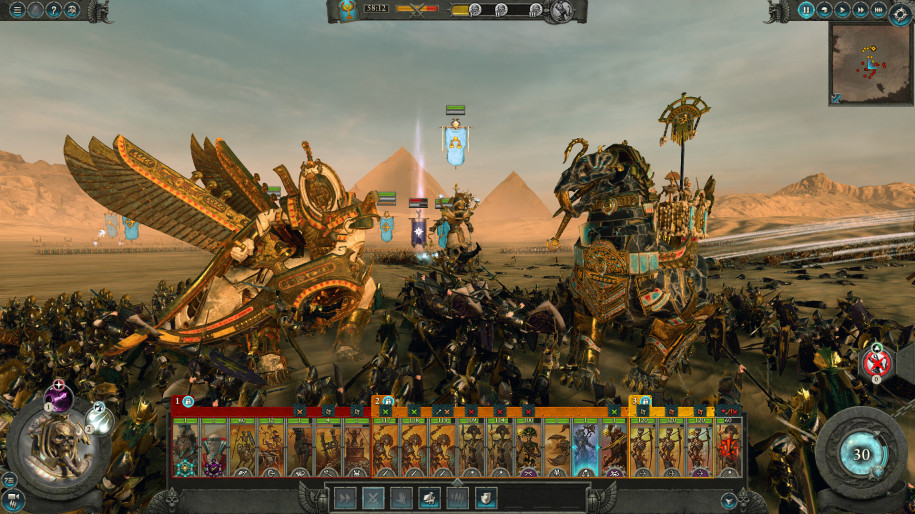 Rise of the Tomb Kings is a truly welcome (and different) race that adds a ton of variety to Total War: Warhammer. Its exotic mix of troop types, beautiful civilization (what’s left of it), and unique gameplay mechanics, breath a lot of replayability into an already epic game. I highly recommend giving them a go.

Total War: Warhammer 2: Rise of the Tomb Kings features outstanding graphics that make its survival horror gameplay truly shine. However, you want to have a pretty beefy gaming PC or gaming laptop in order to play it at a decent framerate. So, you may just want to invest in a decent gaming rig: