Even though it is not directly revealed by Microsoft, an update of the next version Windows System is spreading on the Internet reporting that Microsoft will demonstrate the features of Windows 10 – at a special event in January 2015. The special event will be scheduled after the Consumer Electronic Show 2015 though no date and time is confirmed at this time.

First hinted at in April 2014 at the Build Conference, Windows 10 aims to address shortcomings in the user interface introduced by Windows 8 by improving the user experience for non-touchscreen devices (such as desktop computers and laptops), including a revival of the Start menu seen in Windows 7, a virtual desktop system, and the ability to run Windows Store apps within windows on the desktop as well as in full-screen mode. Windows 10 will be available for desktops and laptops, and it has been announced it will be used on tablets, smartphones, other embedded Windows products and also the Xbox One.

It is indicated that this worldwide demonstration to consumers will enlist all the features and tell the world about all new things they will see in their upgraded PC’s. The concept is unique as Windows 10 will be running in all kinds of devices. It will help non-technical people to relate to this next-generation operating system from Microsoft. 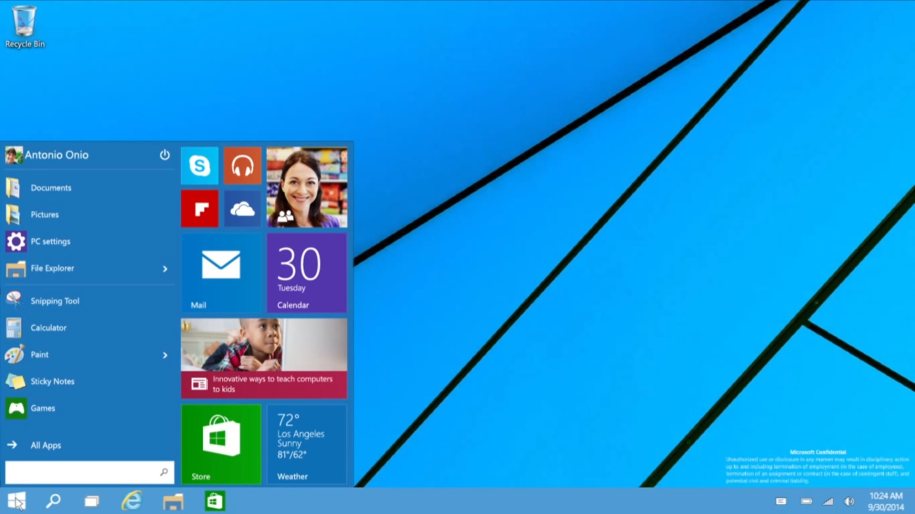 The familiar Start menu is back, but it brings with it a new customizable space for your favorite apps and Live Tiles.

Everything runs in a window:

Apps from the Windows Store now open in the same format that desktop apps do and can be resized and moved around, and have title bars at the top allowing for maximize, minimize, and close with a click.

You can now have four apps snapped on the same screen with a new quadrant layout. Windows will also show other apps and programs running for additional snapping and even make smart suggestions on filling available screen space with other open apps.

There’s a new task-view button on the taskbar for quick switching between open files and quick access to any desktops you create.