Treyarch has leaked their Zombies mode for the upcoming Call of Duty game set to release November 6 or this year. 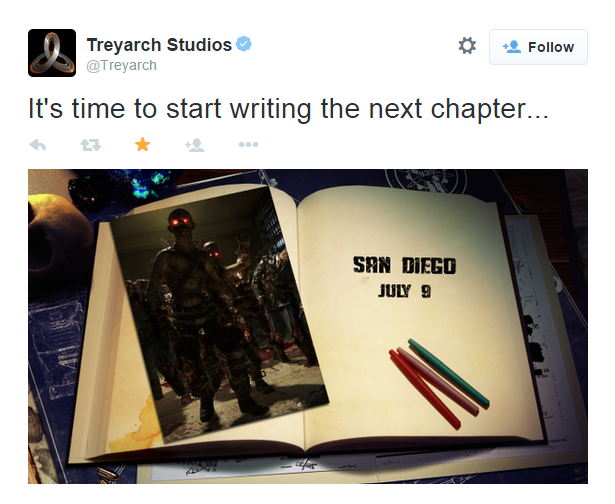 Treyarch posted a picture on Twitter revealing that more information about the Zombies mode for Call of Duty: Black Ops III will be presented in San Diego July 9. Though the post was relatively vague, it’s pretty much assumed that the grand reveal will be set during Comic-Con 2015 which will be happening July 9-12 in San Diego. Coincidence? I think not!

Call of Duty: Black Ops III received a lot of attention, previously at E3 after the announcement that Activision and Sony were making a partnership. Activision CEO, Eric Hirshberg commented that this was something beneficial to both parties.

“The time was right for us to partner up with Sony,” Hirshberg told IGN. “They really wanted it.”

Additionally, Activision revealed that this game was going to involve new mechanics that will be a fresh take on the series for former Call of Duty fans. With the new weaponry, oddly strong emphasis on the main story and a new partnership between Sony and Activision, fans will just have to wait and see if the final product will live up to the hype of the advertising.

For more Call of Duty news, keep up with cpgaming.gg.