7 Days to Die
The Fun Pimps

I have to say right off the bat that I initially had rather mediocre hopes for 7 Days to Die. But boy, was I wrong for assuming that it would be just another zombie-killing game. We, in the gaming world, have been caught in a heavy deluge of survival games as of late. Not just survival games per se, but more particularly, post-apocalyptic survival games—usually with zombies lumbering around within them.

Games such as Day Z, Rust, H1Z1, and others, have captivated the gaming masses for quite some time now. Not only that, but it seems as though every other day you have some indie game developer coming out with their own spin on the post-apocalyptic game genre. Some of these have been really great, such as Miscreated, while others have been decidedly lackluster, such as with efforts like No More Room in Hell. Meanwhile, you have a subgenre of fast-twitch, zombie-splattering games like the Left for Dead and Dead Island series, which are fun for a time, but quickly lose their steam if you’re looking for experiences with more depth. 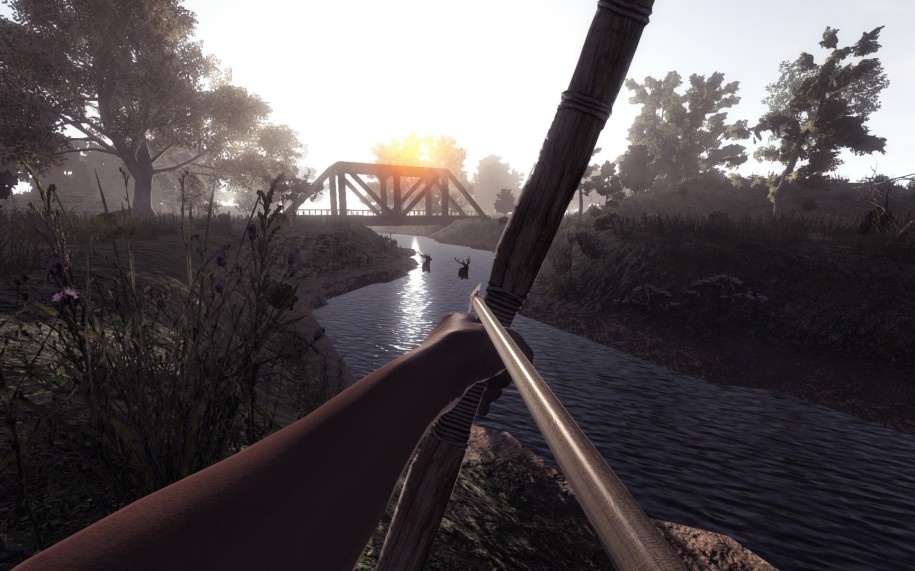 I began my first game of 7 Days to Die with a buddy who’d purchased the game for me. He’d heard it had improved by leaps and bounds since its initial release back in December of 2013. Heck, I thought, it better—it’s been out for over three years now! Not surprisingly, I started off spawning in with a pair of undies, some meager foodstuffs, and that’s about it. Luckily, the game provides you with a basic tutorial of sorts, where it guides you on how to craft your first essential supplies, including a stone ax for gathering resources, and basic clothing for protecting yourself against adverse weather conditions.

As my friend and I gathered resources, we noticed that our maps had GPS coordinates, which was really handy for tracking each other down. 7 Days to Die can be played in persistent multiplayer servers, or servers that are dedicated and based on one’s computer. Since we wanted minimal interference (it was our first game after all), we set ours up to only have a maximum of eight players.

During our time spent trying to locate one another, we both encountered a multitude of zombies. Sometimes they would find them shambling around solo, other times they’d be in large packs. They also came in a wide variety of shapes, sizes, and modes of locomotion. By that last comment, I meant that some of them were actually missing their legs, and had to crawl across whatever landscape we found them in. What was rather disquieting about 7 Days to Die’s brand of zombies is that sometimes they make some seriously creepy sounds, such as deep moans and bizarre gurgles, while other times they seem to sneak right up on you without warning. 7 Days to Die is a very dangerous game, where you are never safe wherever you are. 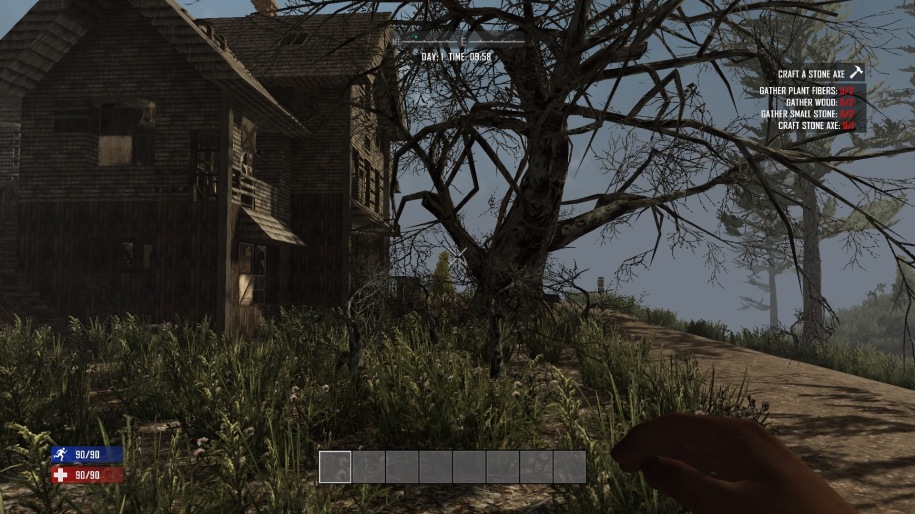 We had just been nearing each other when night fell. That changed the game completely. As the sun set and we became enshrouded in darkness, the ambient music and atmospheric environmental sounds shifted into a weird place. It was like being sucked into a really scary horror film, only instead of merely watching one, we were actually in one. But the creepy ambience was the least of our worries, we’d soon find out.

Little did we know that at night, instead of crudely shuffling around, zombies actually run. We’re not talking about running as in how someone might jog up to a bus, we’re talking full-on sprinting, here. My first experience with this factor scared the bejesus out of me. As I approached a lone gas station in the desert, a large pack of zombies suddenly noticed me and began heading right for me. I took off in the opposite direction of course, but it was then that I realized that I had a stamina bar, and they didn’t. Eventually, I became winded, and they caught up to me. The result wasn’t pretty. Let’s just say that all of those hungry zombies weren’t hungry for long. 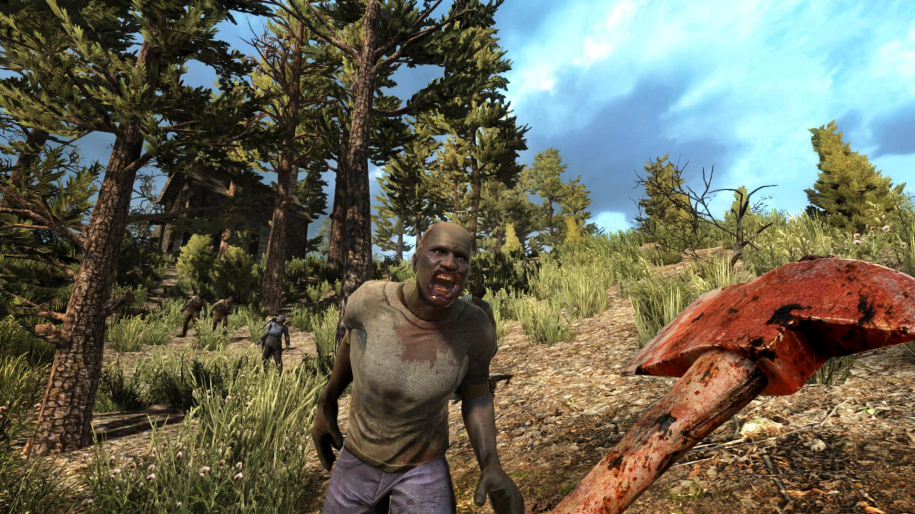 I spawned in again, this time with just my underwear. Since it was still night, I was more cautious as I traversed across the desert plains. But alas, another gaggle of undead noticed me, and chased me just as before. That second time, however, I managed to seek temporary refuge in a nearby derelict house. I slammed the front door behind me and went further back into the house. The zombies were on the front porch in no time, and began smashing down the front door.

I ran upstairs and locked myself into a bedroom from there, hoping to wait them out through the night (it was almost morning). I cringed in the darkness as the zombies broke into the house. Each second seemed like an eternity as I heard them scurry around throughout the house, and then I heard their filthy feet scampering up the stairway. Eventually, they smashed through the door of the room I’d been hiding in and ate me for an early morning breakfast. Even though I have died many times, in many other survival games, that experience alone was probably the scariest I’ve ever had to go through. 7 Days to Die is one fright-fest of a game.

In addition to offering lots of scares, 7 Days to Die also gives you the tools to fight back against the undead hordes with. There is a robust building system available for you to either build your own customized base from the ground up, or to retrofit old houses, stores, and other structures with, as you see fit. You can also construct all manner of defenses around your base, such as different types of spikes, pits and moats, and so forth. Things really got fun when my friend and I had managed to finally build up our own base and outfit it with a full array of defenses. At nighttime, our games morphed into tower defense experiences—really great ones.

7 Days to Die also has a very developed crafting system—probably the best one that I’ve seen in a survival game. It doesn’t hand-hold you through the recipes, but rather gives you some basic information and allows you to figure things out on your own. Let’s just say that you should keep everything that you come across in your travels, since you never know what you’ll need in order to craft certain items. 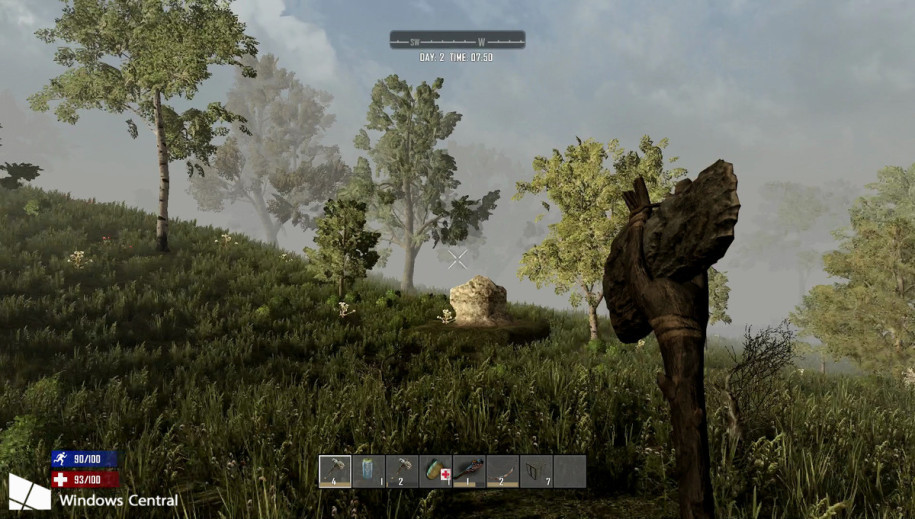 The game’s combat system is decent, and pretty straight forward. If you have melee weapons, you’ll want to quickly dash in and take a swing or two at your adversary, then duck back out while trying not to get hit. Ranged weapons, of course, are the preferred choice, since you can take out zombies without risking getting munched on. You see, if you happen to get chomped on by a zombie, they can infect you with a virus…and we all know what that can lead to…

7 Days to Die’s graphics are good, and have come a long way since it first debuted. There is a large variety of zombie types, even ones that look different depending on which of the diverse biomes you encounter them in. However, for me, a game’s background score can really make or break the whole gaming experience. 7 Days to Die’s music really nails it here. It lends a creepy layer of real horror and dread to the proceedings, and amps up the tension considerably. I showed one of my gaming sessions off to a few friends while playing it on my beefed up gaming laptop, and they were creeped out by what they saw and heard. 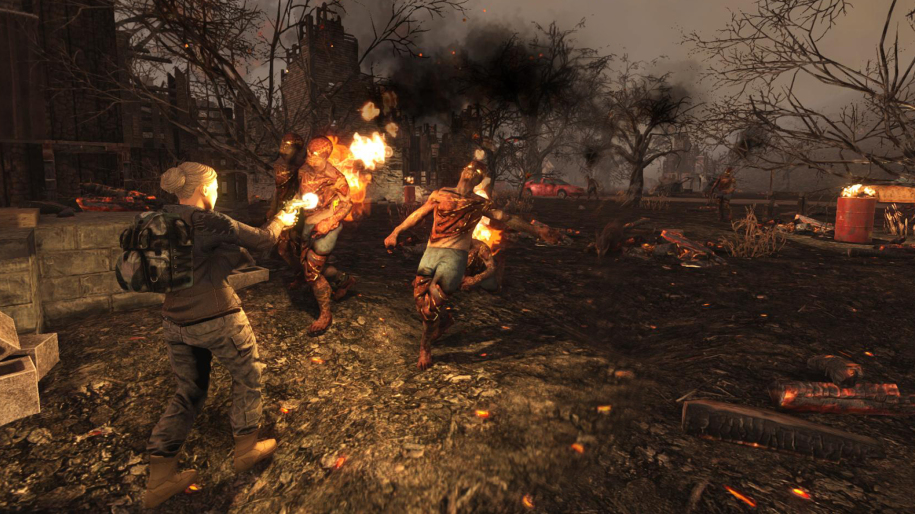 7 Days to Die is an incredible survival horror crafting game extravaganza. It combines the best elements of what I love in other post-apocalyptic zombie games, and pretty much eschews whatever I don’t, or what I feel is unnecessary. I can’t wait for the full release of 7 Days to Die, and will be back soon to give you all a review of that as well.