The Assassin’s Creed series has quite an extensive catalogue of games by now, over twenty in all. Each of them is set in various disparate timelines, some overlapping, and feature quasi-historical references and environments. The mainline, or major triple-A Assassin’s Creed releases number is smaller, I was able to count eight or nine from that larger number, of which last year’s dismal installment, Assassin’s Creed: Unity, and this year’s Syndicate, are both part of.

The Assassin’s Creed series embraces the inner-assassin in each of us, and even though it is coated with puzzle elements, platforming, and the like, it basically boils down to killing human targets, both high value and low. In this voluminous series, players are teleported by a magical time machine into the boots of various assassins working for a shadowy organization bent on taking out their mortal enemies, the Templars. 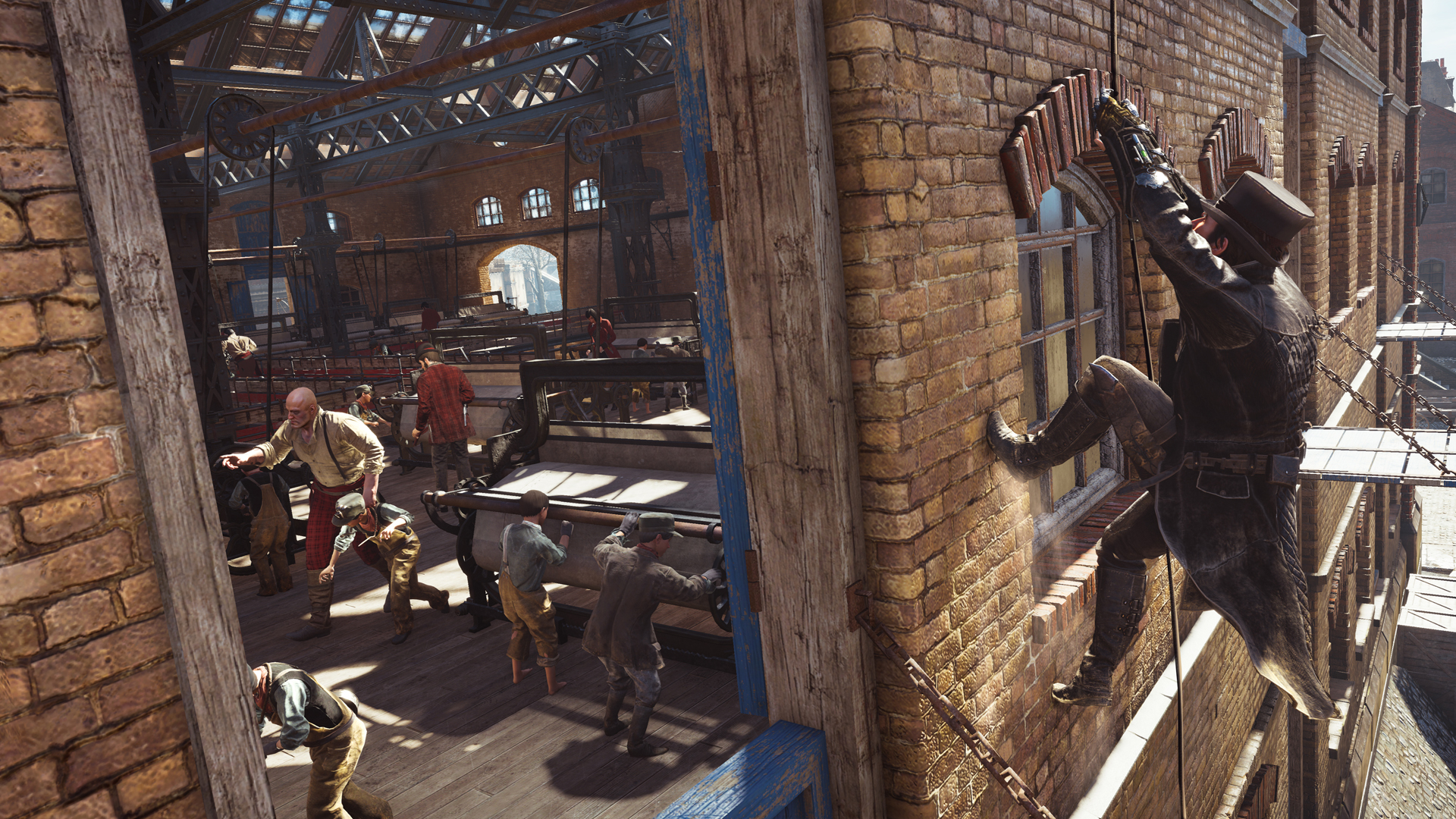 Along the way, players encounter all sorts of colorful (and some quite forgettable) characters. Some of them are straight forward in their intentions of wanting you harm or wanting to assist you, while others aren’t as discernable, and can even stab you in the back later on. That’s what I’ve always enjoyed about the series, you never quite know if you should trust someone or not and tend to keep everyone at arm’s length (or blade’s length) until finding out what they’re really all about.

Oh, and then there’s the whole open-world thing. Assassin’s Creed has always welcomed a free-roaming experience, where players are allowed to free-run, prance about, and climb many areas normally inaccessible in other video games. This freedom of movement has always been a hallmark of the series, and Assassin’s Creed: Syndicate is no exception. 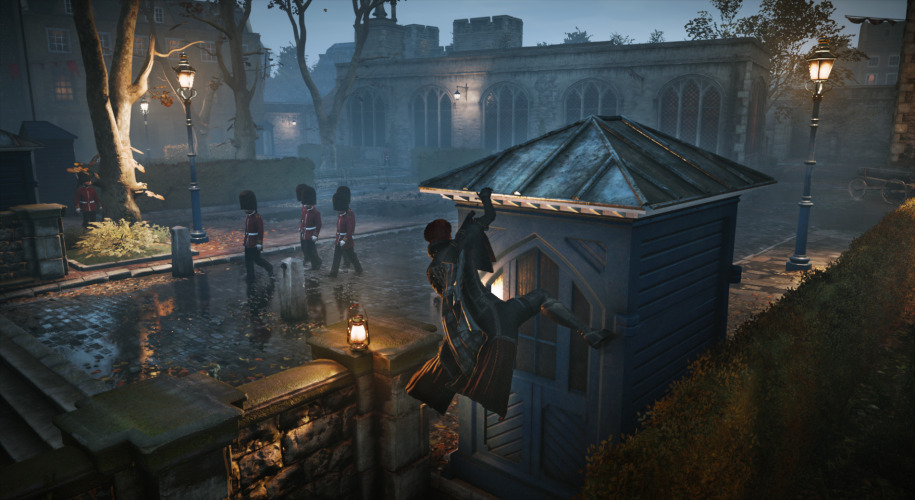 In a departure from any previous entrants into the series, players are given the opportunity to play as the either of two twins. You’ve got the main protagonist, Jacob, an unabashed alpha male who is cocky, capable of tremendous violence, and uncaring about what others think of him (refreshing in my opinion), and his little sister Evie, who seems like a tacked on character more than anything else. It’s as if Ubisoft felt the pressure to include a female as one of the main characters, and that’s indicative because of the fact that her story arc gradually fades as Jacob’s become more prominent toward the later parts of the game.

In another bizarre twist, money, equipment, and even experience points for skill progression, are shared between the odd couple. Not only that, but their skill trees are also practically identical, which is strange given the fact that Ubisoft seemed to be going for the kick arses and take names-archetype in Jacob, while casting Evie as the more stealthy, smooth operator. I would have preferred to just play as Jacob, without any forced political correctness distracting him from his dastardly deeds, it would have made the game less confusing and convoluted, and hence more fun. 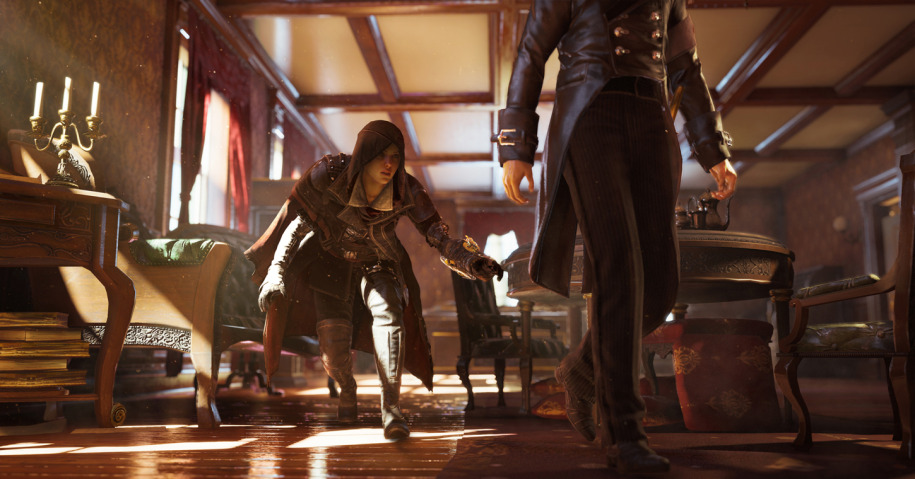 The game’s primary environment, Victorian London, looks gorgeous, and is almost a character unto itself. And it’s not just pretty. Gameplay-wise, players are able to scale pretty much any tower, building, and smokestack in the city environs. You’ll behold normal, unsuspecting pedestrians milling about in the streets below as you slice through the air with your new toy, a grappling hook. Belligerent policemen will try to accost you if you’re spotted, and darting around and above them is almost like playing with children. All of this makes you feel like the stealthy, highly mobile assassin that you portray. You can even bound across the Thames via free-running and jumping between barges and pieces of debris, or hijack any vehicle you see on the roads, from car to horse-drawn carriage, which can be a blast.

Some missions involve shadowing an enemy, and player (mainly gaming PC folks) complaints and feedback about them being too hard in past games in the series, have resulted in them being challenging, but not nigh-impossible as in Syndicate. Most of the missions, however, involve locating the general location of a target, carefully approaching them so as to be undetected, pouncing down upon and dispatching them, and then disappearing into the wind like a ninja. There are so many ways that you can approach each mission that many of them offer considerable replay value, even if you get killed over and over on the same mission.

By taking out important enemy figureheads in specific districts, you slowly begin to take them over and install members of your own cadre of underworld crooks in their place. This gives the city a very dynamic feeling, as you attempt to not only build up your own gang, but free the various boroughs of London from the tentacles of the insidious Templars and their minions. Liberating child-slave laborers from Templar controlled workshops and factories, kidnapping enemy agents, and the like, they all more or less lead to eventual boss assassination missions. These vast, round-ending missions are more complex and require substantially more planning and strategy to pull off than the ones leading up to them, and were a facet of the game that I enjoyed a lot.

The graphics in Assassin’s Creed: Syndicate are very rich and detailed (especially for those with 4k gaming setups), featuring suitably dank and dismal representations of Victorian London’s crummy boroughs. The more pristine areas of the upper-crust of society are also well rendered, and suitably opulent and luxurious. The sound department also got it just right, with languid, brooding string and bass notes for the more subtle passages of time, and rancorous bombast for the combat and killing portions. The overall capable confluence of sights and sounds really do a good job of transporting you back to a pseudo-realistic approximation of back-in-the-day London. 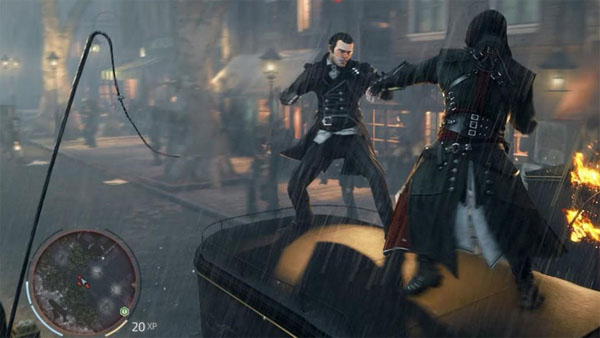 I found Assassin’s Creed: Syndicate to be a worthy entry into the Assassin’s Creed series, especially in light of last year’s universally shunned Unity offering. Besides a few niggling drawbacks, the overall experience is a fun, stealth action-lover’s paradise. Those who enjoy Arkham-style fisticuffs and Grand Theft Auto-esque vehicle play, combined with Assassin’s Creed’s own unique free-roam movement system and assassination techniques, should really get a kick out of this latest entry. I for one, enjoyed it and I hope others do as well.

Want to fully appreciate the plethora of prettiness that Assassin’s Creed: Syndicate’s visuals have on hand? Consider getting a new gaming PC, or upgrading: 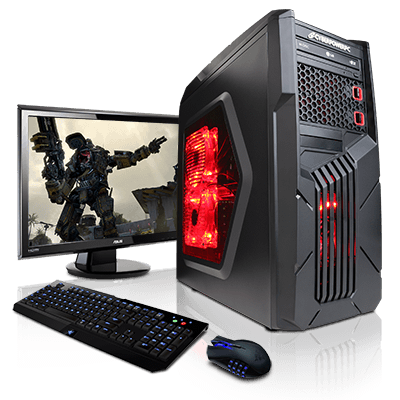