Ever since I played my first game of pen and paper Dungeons & Dragons, I was hooked. There was nothing like either designing an entire world from the ground up (as a Dungeon Master) for my regular group of players to explore, or creating my own unique character (as a player) and form a party with other brave adventurers with which to do the exploring. Role-playing games (RPGs) are an engaging and highly entertaining way that people can stimulate their imaginations and create compelling narrative-driven experiences that keep you coming back for more and more. Once the RPG bug has bitten you, you’re usually hooked for life, eschewing the jaded naysayer’s dogma that you should “grow up” or “grow out” of it.

It was only natural that the original table top RPG forbears would be transmogrified over into the digital realm as technology became more advanced throughout the years. The first major computer-based RPG revolution happened with Bioware’s phalanx of games almost twenty years ago, including the Baldur’s Gate series and their subsequent expansions, as well as Planetscape: Torment, and the like. These hallowed games paved the way for future RPGs to come, and even modern sword & sorcery products are, in some form or another, influences by these originals. 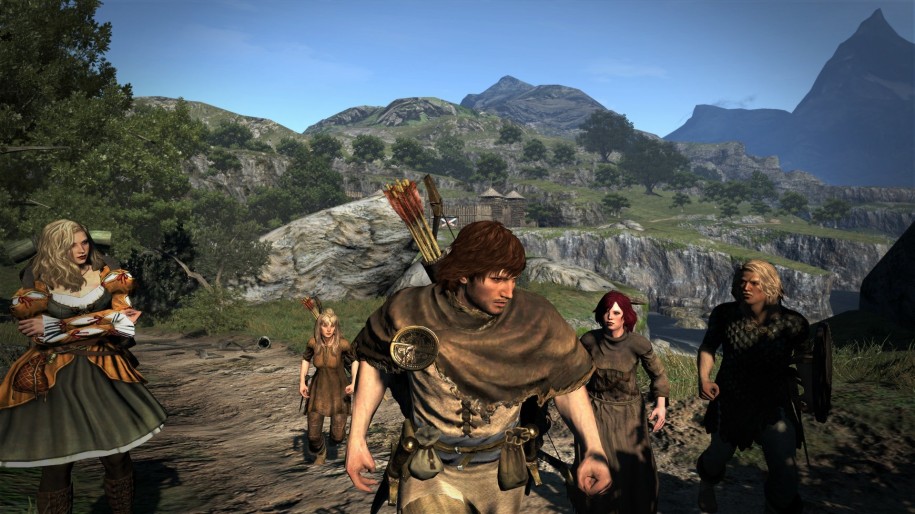 Dragon’s Dogma: Dark Arisen is one such game. To be perfectly honest, when its original form was introduced, simply titled Dragon’s Dogma, for consoles back in 2012, I barely took notice. I’ve never been too keen on playing games on consoles, especially RPGs. Too me, consoles have always been the little red-headed stepchild of PCs since they have been proven to have inferior graphics, various game mechanic limitations, and a game controller-based control scheme, which just doesn’t quite stack up to the good ‘ol classic keyboard and mouse layout. Even though certain genres are indeed better suited to playing with a game controller, such as racing and fighting games, owners of gaming PCs can merely purchase a PC-compatible controller with which to play with in those cases.

Capcom has also been known to make games that were a little too cartoony and saccharine for my tastes, and around the time it was released, grim-themed games such as Dark Souls and Demon’s Souls held sway over the legions of hard-core, computer-based RPG fans. Until Capcom recently decided to make a version for the PC crowd I just assumed that it was just another RPG-lite type of game such as their frankly shallow Dungeons & Dragons series back in the 90s, which were high on fluff and action, but low on depth and story. Thankfully, since Capcom ported their take on the modern RPG over to Windows, I’ve been given the opportunity to play it and here’s what I discovered… 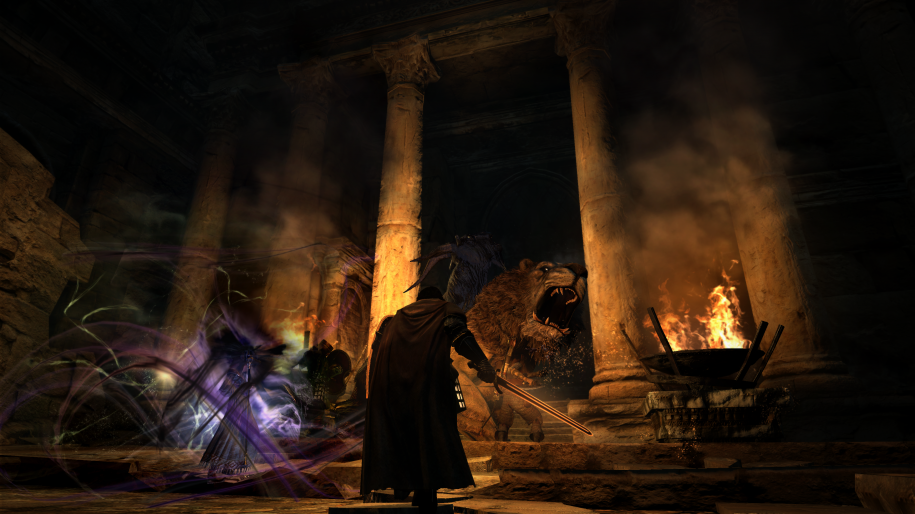 The new PC-based version, Dragon’s Dogma: Dark Arisen, is a game that is surprising more serious in tone in contrast to other Capcom offerings. It takes place in the foreboding world of Gransys, a mysterious land of deep dungeons, haunted manors, decrepit ruins, and dark forests. Dark Arisen definitely has a lot in common with Dark Souls, and is a realm articulated through a dark lens instead of the more cutesy type of games usually associated with anime-oriented fare (Capcom is a Japanese company after all).

Players take the role of an Arisen, a powerful human who has been magically augmented with unusual powers after losing a battle with a dragon. The dragon in question portends the end of days, and you and your allies are tasked with preventing this calamitous series of events. Together with your AI-controlled Pawn Legion, special support characters that will help you in your various quests, you hope to save the world from a dreadful demise by slaying said dragon, the ultimate harbinger of doom. 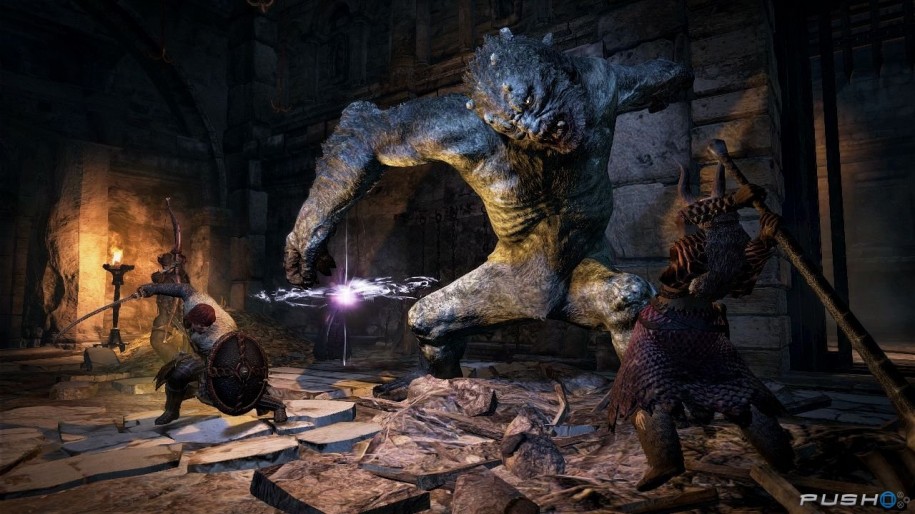 Although the overall plot may not sound all that original (I mean come on—slay a dragon?), the way in which the game is played out, is. Although the game features a more action-heavy take on combat, popular with many Western games, players who rush headlong into battle will quickly meet their end. Therefore, a more RPG approach—careful preparation before many of the more major battles—must be plotted and planned out, giving Dark Arisen a more strategic bent.

Whereas most 3rd person RPGs and MMORPGs feature combat which has the characters hacking and slashing at larger foe’s lower extremities, in Dark Arisen characters can climb up onto foes using Capcom’s novel “Grab” system. Want to scale that Chimera and directly attack its serpentine-headed tale from its back? Jump aboard. Can you slow down that lumbering Cyclops by grasping onto its thickly muscled legs? Sure can—leap right on them. I found this unique, and much more realistic (as much as a fantasy combat system can be realistic that is) and plausible. You can even have your pawn allies perform WWF-style full-nelsons on smaller humanoid foes so that you can administer the final coup de grâce to their immobilized bodies. 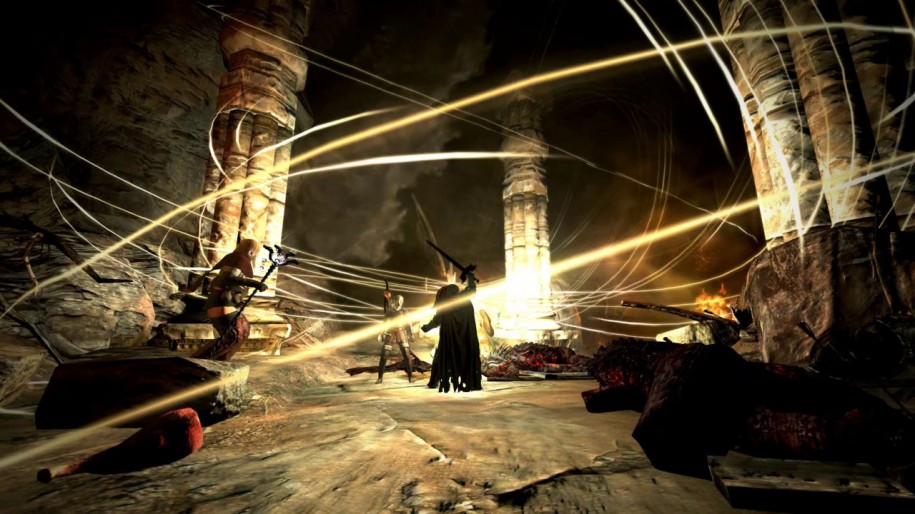 Dragon’s Dogma: Dark Arisen features a vast world that is fully fleshed out. Indeed, every region is jam-packed with detail and interactive content and includes numerous malevolent enemies that will attack your from unusual places when you least expect it. For instance, at one point my party was set upon by a vicious, blood-thirsty band of harpies, which soared high above us, and we had to fire arrows and cast spells at them from the ground. Other times we found ourselves being ambushed by shadow-lurking foes and having to adapt our combat strategies on the fly. Luckily, you can pause the game in order to perform such important tasks as gulping down healing potions and such.

The graphics of Dragon’s Dogma: Dark Arisen have been updated for the PC and look truly gorgeous. The grim environments are darker-themed and really convey a sense of doom and gloom. The characters and the creatures and entities that you encounter are also both well-conceived and rendered, as are the spell effects and various other special abilities and talents on display. Every swing of sword or ax carries some real heft along with them, similar to Dark Souls. There is also a good amount of character customization and a wide array of character classes (Warrior, Assassin, Sorcerer, etc.), and you can even change your gender and appearance. The sound is also on point and enhances the high-fantasy setting to epic proportions. 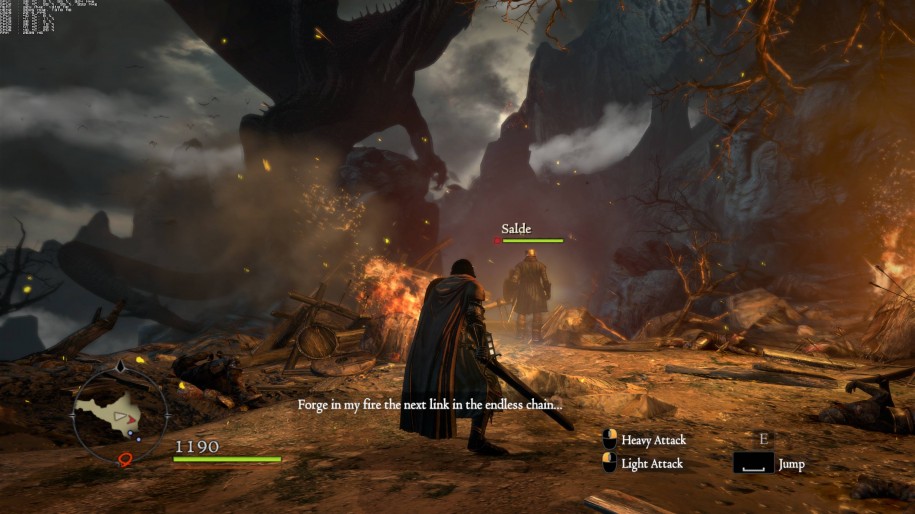 Dragon’s Dogma: Dark Arisen is a joy to play, and features a sprawling world full of danger and mystery. It offers a hefty seventy or so hours of gameplay since the PC version adds new quests and other content. If you are a fan of RPGs or hack-and-slash games, you’ll definitely want to give Dragon’s Dogma: Dark Arisen a try as it is one of the more impressive and unique RPG experiences available for the PC, and one you soon will not forget.

Dragon’s Dogma: Dark Arisen is a handsome game that has some real eye-catching visuals. Try playing it on a new gaming PC: 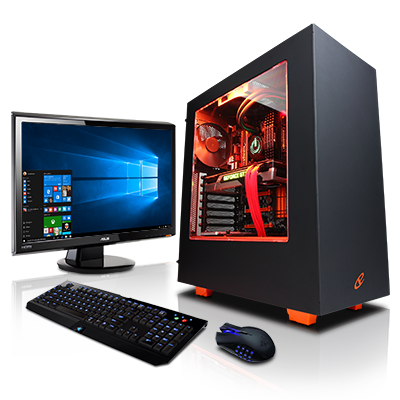