I have to say from the get-go that I am a lifelong, diehard horror fan. I mean, I was practically raised on the stuff. I was inundated with so much horror from early on that it helped me to set my preferences for what types of horror that I considered “real horror.” Everything else was pretty much treated as wet food stamps.

Among my favorite types of horror were such kinds that would stay with you long after you experienced them. Film-wise, we’re talking about Let’s Scare Jessica to Death, The Exorcist, The Shining, The Evil Dead, Demons, The Thing, and the like. Something about each of those films built up tension through atmosphere, so by the time that the main baddy showed up, you were already a bundle of nerves.

The same goes for video games. If a game didn’t establish a creepy ambience, and ratchet it up degree by degree, it couldn’t keep me engaged for long. The first game to actually do that wasn’t Resident Evil (zombies just aren’t scary to me), it was Amnesia: The Dark Descent from Frictional Games. It managed to set up a sinister environment so effectively, that by the time its jump scares began I was already cringing with fear.

Which brings us to the jump scare. I don’t mind a jump scare or two if they are properly implemented. Jump scares have to fit into the context of the storyline and the contexts of particular situations. Being a horror writer and filmmaker, I suppose I tend to overanalyze these factors a bit, but I’m much more discriminating than most. Jump scares just for the sake of attempting to illicit cheap jolts out of people feel tawdry and flimsy. An over-reliance on them indicate to me that the architect of said jump scares doesn’t have much else (if anything) to offer. 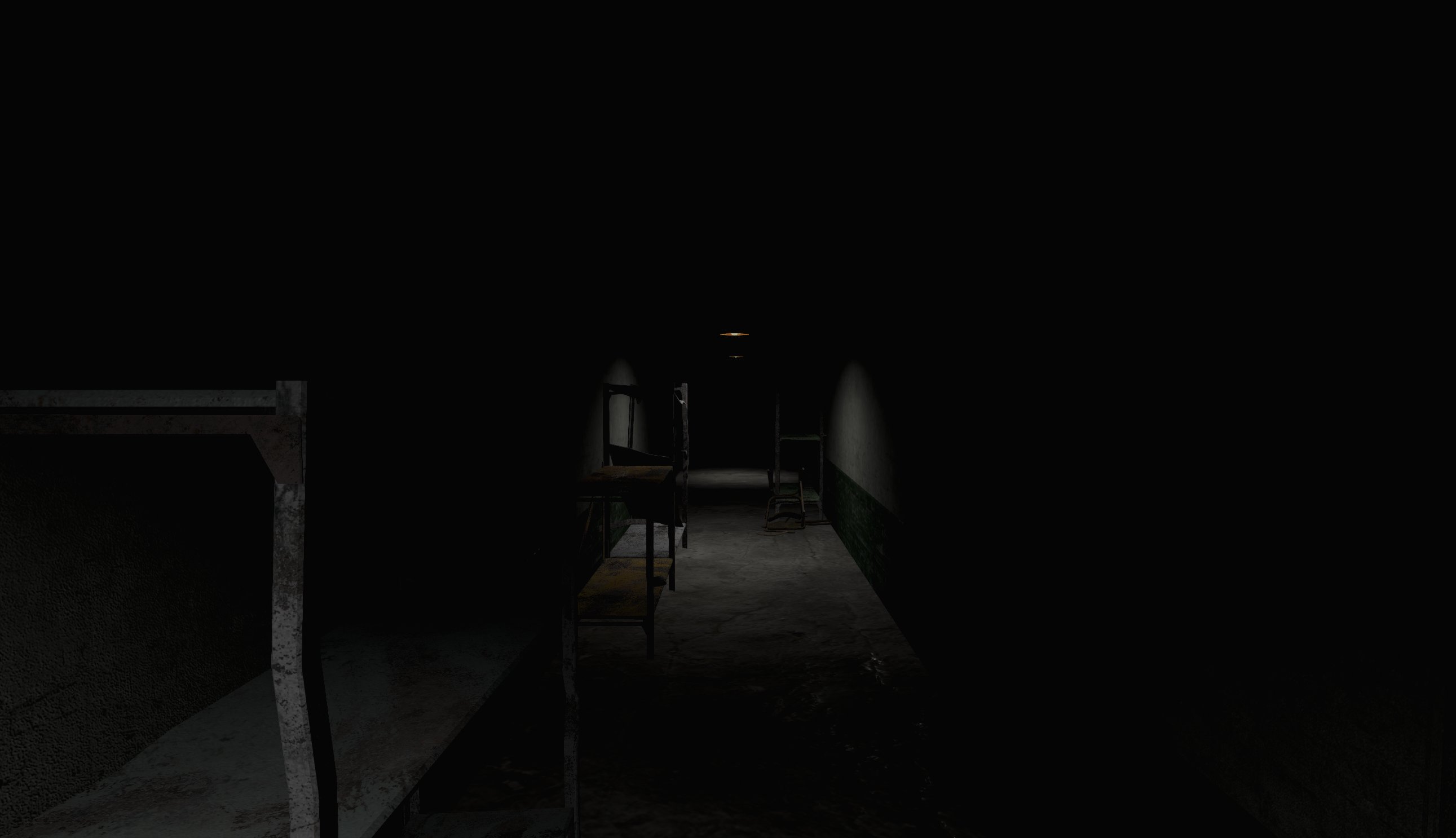 When I’d first heard of Emily Wants to Play, I thought: Okay, they have the dolls and toys and everything…more Five Nights at Freddy’s type rubbish. I kept an open mind, however, since sometimes indie developers can come up with much more original gaming content than the triple A’s.

Emily Wants to Play’s set-up is certainly straight forward and unpretentious. You play as a pizza delivery boy who shows up at a suburban home at the end of a darkened block, in order to drop off your last pizza for that evening. The only thing is that the front door to the place is ajar. Of course the pizza boy is super curious as to why this is, and so wanders inside. During my play through, at this point, a female companion that happened to be watching this blurted out (complete in annoying valley girl dialect): “Oh, come on! The door’s open and like, you’re just going to wander in? Give me a break!” As usual, I had to remind her (as I do everyone) that if the main character wasn’t curious enough to creep in, we wouldn’t have a game. Does that ever occur to these people? But I digress… 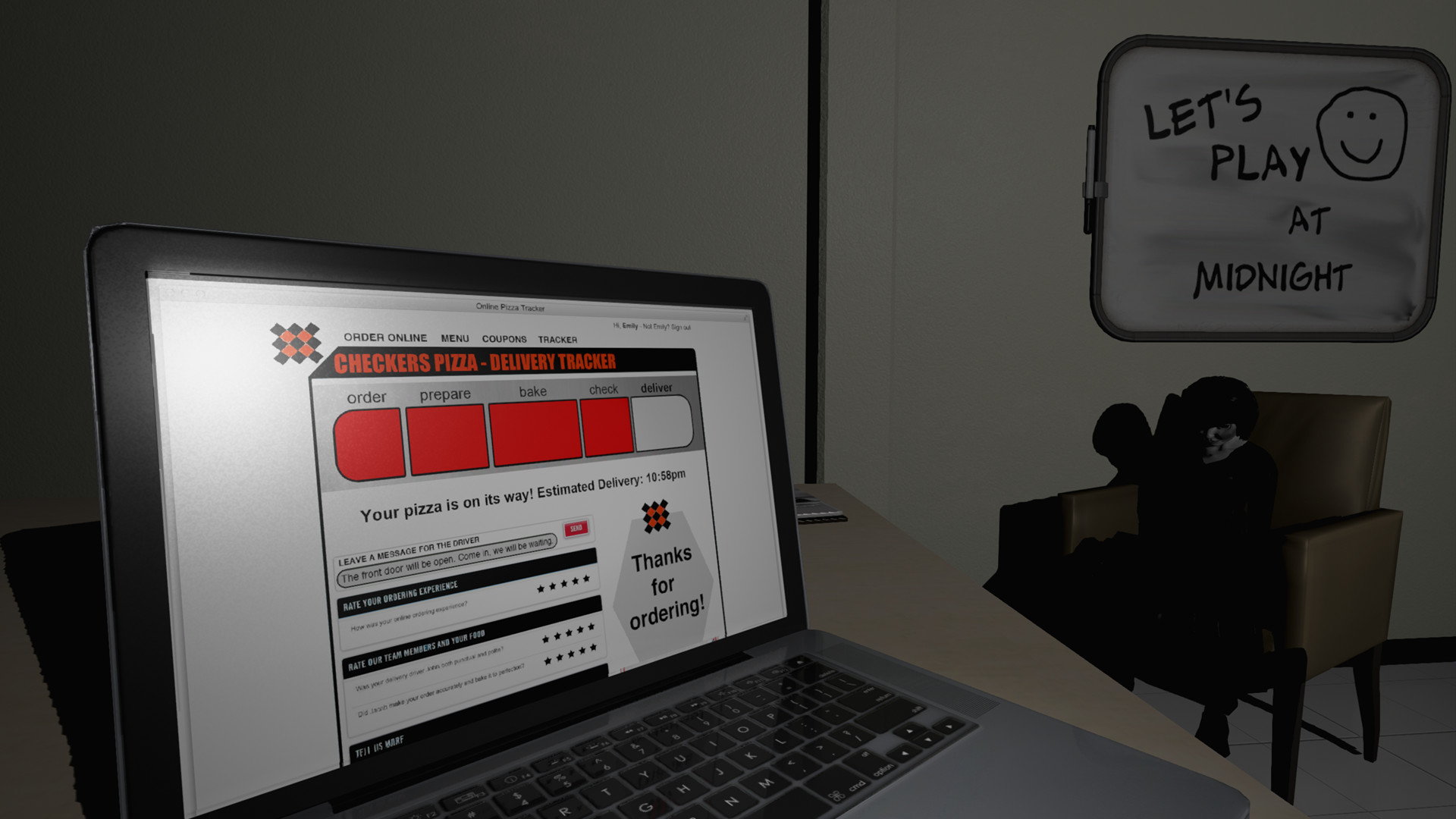 After entering, the door closes and locks behind you (big surprise!), and your goal from there is to survive until dawn. The first thing that I noticed was how simplistic the graphics were. The low level of detail and extreme angularity of everything (including the couch) reminded me of older games from the 90s. Self-consciously, the developer seemed to be aware of this and so laid a bunch of boxes around to make it look as if someone were moving. The only problem is that the boxes likewise lack detail and the house still ends up looking very un-lived-in.

From there, the game unfolds in a rather simplistic fashion. You wander around the house with your light in front of you, illuminating the darker areas. At some point you’ll hear a malevolent chuckle, or sinister laugh, which indicates that something evil is nearby. That “something evil” consists of one of the few devilish toys that inhabit the house which are hell bent on killing you.

I soon found that the sterile atmosphere of the modest suburban home actually enhanced the build-up of tension in Emily Wants to Play. The ho-hum ubiquity of the house’s environs made it seem that this sort of terror could happen anywhere, which makes it all the more frightening. I also enjoyed that even though the game is only about thirty minutes long, it does manage to build up a pretty unsettling amount of nervous energy before revealing its jump-scare filled brand of horror.

The nuts and bolts of Emily Wants to Play’s game play boils down to encountering one of the evil dolls and figuring out how to defeat it, then rinsing and repeating. One doll might need to be fled from at first, while another can better be dealt with by remaining totally still. Once you figure out each antagonist’s quirks, the game becomes much less scary.

Emily Wants to Play is a game that tries hard to be original, and in some ways it has achieved that goal. I don’t know of any games that take place in such common surroundings, but then flips the script and makes them terrifying. I mean, I expected horror from an ancient medieval castle in The Dark Descent, but not in a suburban setting. Emily Wants to Play’s simple set-up and accompanying scares were thorough enough to make me not want to play it at certain points, and sometimes wish that I’d just left the pizza at the door and let the homeowners keep the tip. The jump scares eventually begin to grow tiresome, however, so be aware of that.

Emily Wants to Play has some serviceable graphics that fit the simple set-up, but still want to have a pretty beefy gaming PC in order to play it at a decent framerate. So, you may just want to invest in a decent gaming rig: