Let me start this review off by letting all of you know that I’ve played quite a few First Person Exploration games (or FPX’s for short) recently, including Dear Esther, The Stanley Parable, and the spectacular Gone Home. To be quite frank, as I’ve gotten older I’ve really hungered for games such as these, games that invoke the same appreciation for storytelling that I used to enjoy as a kid when my mother would read me lots of stories (probably to shut me up and get me prepped for nigh-nigh time).

Although as adults we all get desensitized and we could say…rather jaded, sometimes, if you’ve had the sort of literary upbringing that I’ve had, you may eventually hunger for something beyond the sorts of gaming conventions that are churned out these days. Sprinting around a corner to evade a rocket fired at you, leaping from impossibly high heights in order to pounce upon legions of thugs, shooting combatants over smoldering battlefields and reducing them to piles of gibs, or commanding some vast fantasy army or space armada into a martial collision of units with foes, in order to see who will be the ultimate, supreme ruler—games have more or less devolved into violent, action-oriented conflicts with very little in the way of variation or tonality. 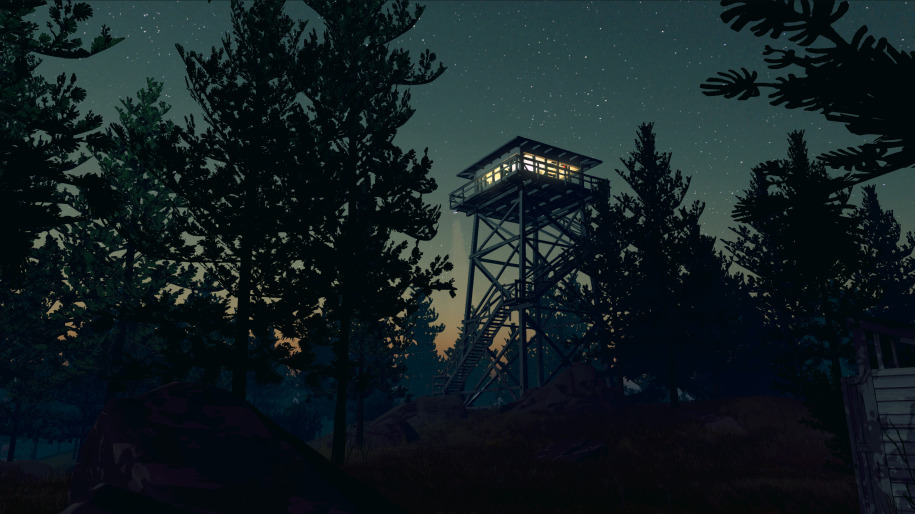 Granted, I do appreciate the new wave of survival horror games, such as the ones ushered in by the Penumbra series. Not being able to arm yourself and fight back against various horrible entities really does allow for folks to concentrate a little more on a storyline (granted there is one) and think about one’s actions a little more carefully before taking action. But still, they are basically games where things are eventually resolved through violence.

That’s why it’s refreshing to see new games in the ever-growing FPX genre, games like upstart studio, Campo Santo’s, Firewatch come to fruition, and shine. It’s the perfect example of a game that puts its writing front and center, lain bare of distractive clutter and boisterous sound and fury. Firewatch is a game with such enthralling writing and plot elements that it doesn’t have to hide behind artificially contrived bluster and blaring action sequences. It takes storytelling back to story-telling. This should be as no surprise since Firewatch was forged by some of the same creative leads that made Telltale’s The Walking Dead series—another brilliant, story-driven gaming experience. 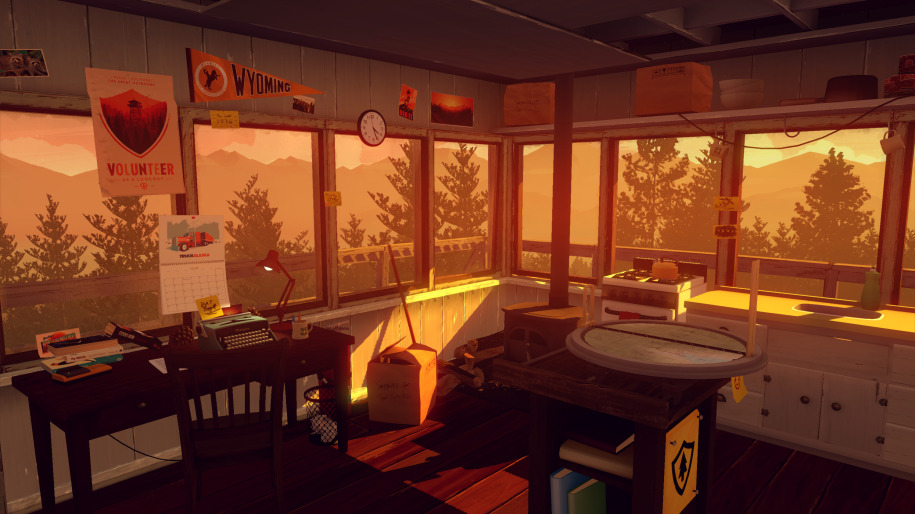 In Firewatch, players step into the well-worn boots of Henry, a volunteer fire watchman, during a summertime gig in the aftermath of the Yellowstone fires of the late 80s. Surprisingly, Firewatch doesn’t start you off in a forest nor atop a hill, but rather in a college bar where Henry met his sweetheart Julia. From there you’re taken on an emotional rollercoaster ride over the next half an hour or so, and this intense prologue almost functions as an entirely independent story, detailing the happiness, despair, and genuinely fascinating relationship that progresses.

Things then shift to the retro-present, where Henry stands fire watch over the Shoshone National Forest, deep in the Wyoming wilderness. When Henry eventually sallies forth from his watch tower, you find out that his surrounding environment is a lonely one (I mean come on-its Wyoming for Heaven’s sakes), with only a few oddball characters lurking around on the fringes of his existence. The game really conveys a sense of loneliness and isolation which is, in my opinion, is a pre-requisite for any great horror or mystery film, book, game, or verbal story. 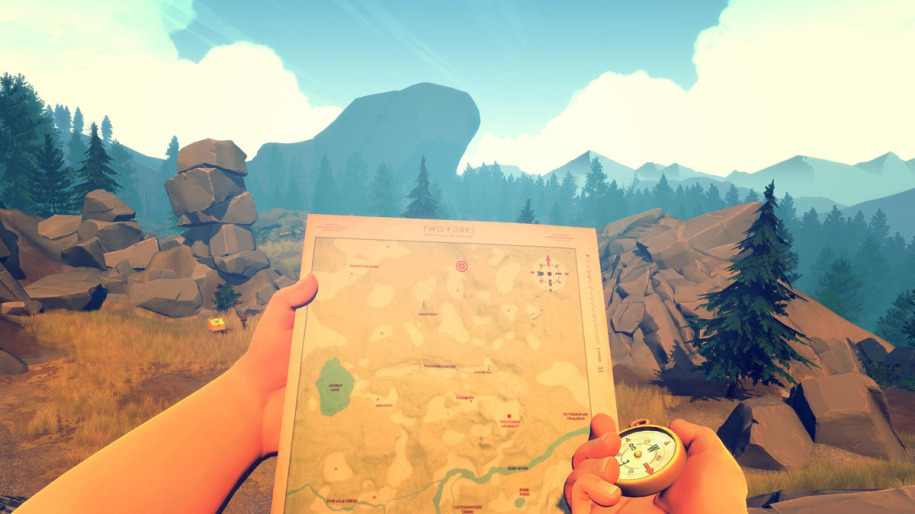 Henry spends much of his time traversing through and exploring the beautiful and rugged Wyoming wilderness and conversing with his supervisor, Delilah, via his walkie-talkie. Thankfully, Henry’s only starting “weapons” are his wits, some clues, a map, a compass, and the aforementioned walkie-talkie. While he chats with Delilah he roams this way and that, scaring off drunken teens and checking out bizarre emergency calls which occur over the course of the summer of 1989. As the first mysterious act concludes, players are introduced to the basic gameplay mechanics and are given a few additional tools such as a backpack full of (no spoilers here) let’s just say…other items.

Gamers looking for more of a Tomb Raider-esque cinematic blockbuster experience will be let down here, as there are no arrows to be shot through craniums, or raucous platforming puzzles to be conquered. And yes, that means there is no combat…at all (okay minor spoiler). Forget Rise of the Tomb Raider this is Rise of the FPX. Firewatch’s plot is narrative driven and unfolds in a more organic way that makes sense, as opposed to more of the “hit that thing there, which triggers that, and then that happens” -type of forced triggers. The focus is all on the story here, which is fine by me, and I’m sure others will find it equally intriguing. 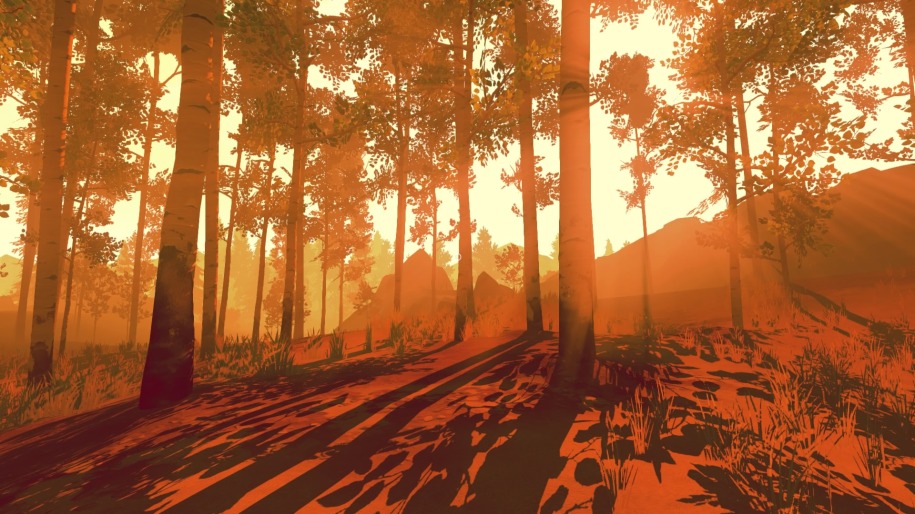 What I really enjoyed about Firewatch is that it starts off very tranquilly, and it was both calming and reassuring to take Henry along various jaunts through the wilderness. As the story progresses, the game’s tension is ratcheted up gradually by degrees (couldn’t resist the pun) until Henry is scrambling around, rushing all over the countryside while trying to figure out if a mysterious figure is stalking him, or if he’s just losing his mind and going bonkers. The forest progressively becomes darker and more foreboding to match the decline in comfort and safety—clouds of ash and smoke begin to drift into the woods and once-familiar landmarks become hazy and indecipherable. I won’t spoil anything from there, but suffice it to say that some really dramatic, cliff-hanger happenings, jump off near the end.

Firewatch’s visuals are exceptionally well-handled, and impress even on mid-range gaming PCs. The lonely Wyoming wilderness is beautifully rendered with a creative, almost dream-like brush, and prove that you don’t have to have ultra-realistic graphics to make a game visually impressive, or expressive for that matter. The ambient sounds are also excellent (and sometimes eerie) and with my headphones on, it almost seemed like I was listening to a calming New Age nature soundtrack or something. The voice acting was top notch as well, and no one had any sort of annoying valley girl, uptalk, or vocal fry accents going on, so you could actually understand what the characters were saying for once. 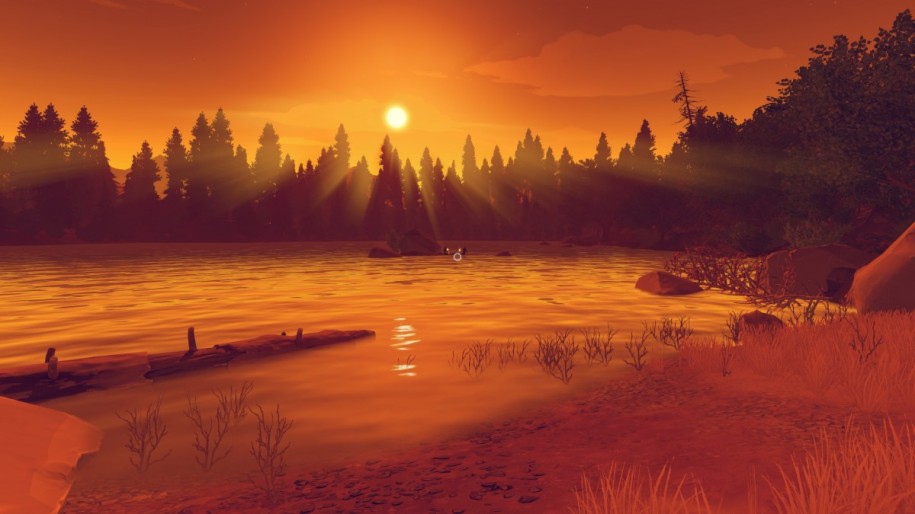 Firewatch bumps the entire FPX genre up to a new level with its strong storytelling, razor-sharp writing, charming graphics, and no-need-for-violence gameplay, focusing on its story instead. It marks an exciting time in the gaming industry, a new path that has been taken which others are (fortunately!) following, with games like What Remains of Edith Finch, Adrift, and Tacoma looming just around the corner. It’s an enthralling, original experience that I think anyone who enjoys a good mystery should pick up and play.

Firewatch’s visuals are best enjoyed with a modern gaming PC or gaming laptop in order to fully pull you into its immersive mystery: 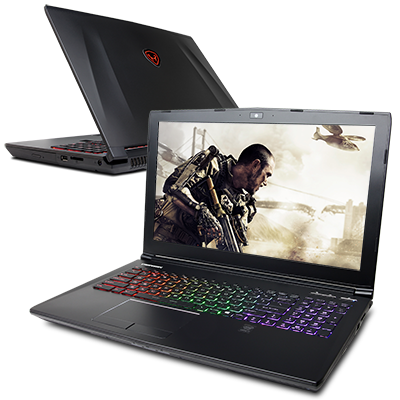