In my god-like omnipotence, I saw fit to have my three beginning colonists’ crash land in a tropical rain forest, this time around. I’d tried other drops in arid, desert, tundra, and even temperate woodland biomes, but not a one of my previous colonies had survived past a couple of months. This time, I thought things could turn out for the better.

My colonists were Terry, a middle-aged, former underground miner from a peasant class background, Amiko, an 18 year old spoiled yet artistic child star with an infectious personality, and Amiko’s mother, Yumi, who was a crack gardener. Oh, and Amiko’s pet warg, Kaizo. 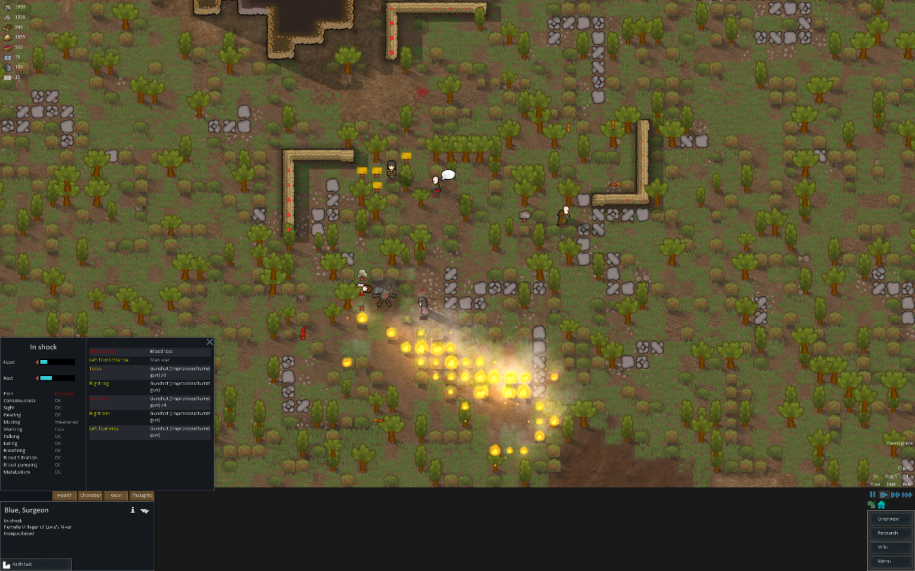 The three quickly set up a starter colony base, complete with storage rooms for food as well as manufactured items and found resources, kitchen area, separate bedrooms, and a garden. The three lived in relative peace, harvesting materials and food, erecting solar panels, and researching various new technologies. One thing was for certain however, and that was that Terry had the hots for Amiko. He’d hit on her at night, he’d hit on her in the daytime, he hit on her while he was hauling resources back home to one of the storage rooms. Heck, he’d even put the moves on her while she was busy trying to concentrate on one of her latest sculptures, but she’d always rebuffed his advances.

Eventually, they were attacked by several consecutive bands of roving bandits. Their defenses were solid, however, and it didn’t hurt that Terry was a crack shot with their hunting rifle and Amiko had surprisingly good melee skills. Amiko’s penchant for up-close and personal combat caught up with her a couple of times though, and she’d end up in the colony’s infirmary for infected wounds sustained in combat, from time to time. Terry, the trio’s medic, was always there by her side in order to treat her ailments.

This in turn led to Amiko falling for Terry. So, a new larger room was built with a double bed for the new couple, and one of their bedrooms in turn was converted into a prison cell to house any captured bandits. 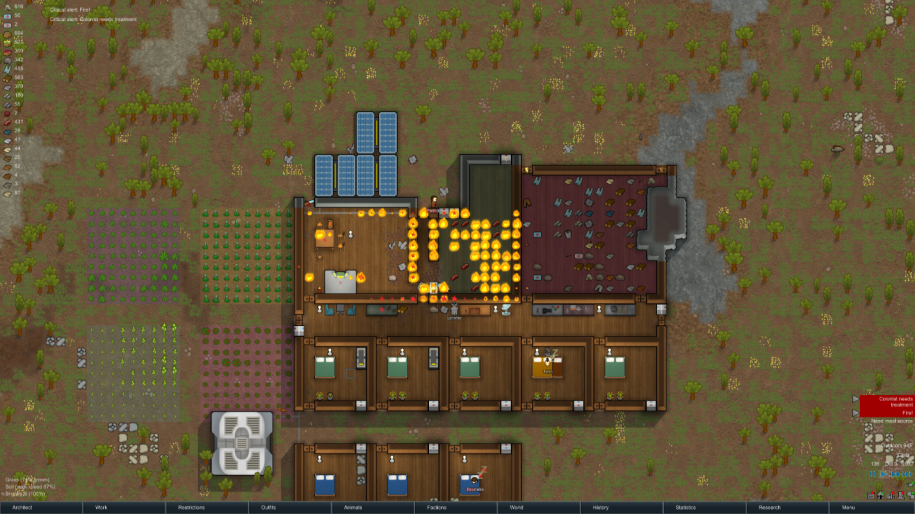 Soon, Terry and Amiko had a wedding date set, and Amiko created her grandest sculpture of all as a tribute to the upcoming ceremony. They placed the sculpture right next to the chosen wedding spot, which wasn’t far from the walls of the colony.

Their solace didn’t last long. In retaliation for killing off a previous wave of bandits, a larger group of from the same gang suddenly attacked. Kaizo, now a trained attack animal, drew first blood, ripping into the blood-thirsty gang of bushwhackers. Amiko rushed forward slicing and dicing with her plasteel blade as she always did, while Terry shot at their foes from afar.

Although they did eventually prevail against the motley crew of malcontents, the battle took a heavy toll. Amiko was heavily wounded, as was her mother Yumi (who was a pacifist). Meanwhile, their loyal pet Kaizo was killed in the frenzied fracas. Although Yumi would gradually make a recovery, despite Terry’s most valiant medical efforts, Amiko tragically passed away. This in turn caused Yuri to become a mental wreck and wander around aimlessly. 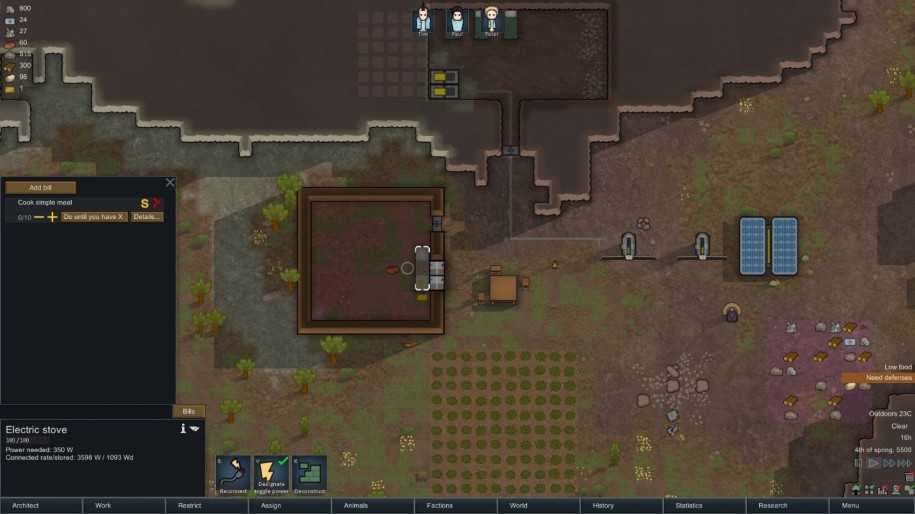 A few days later, Terry also succumbed to his own form of madness. He went berserk while visiting Amiko’s grave site, and bolted over to their nearby wedding site. In his belligerent state, he smashed Amiko’s sculpture to pieces, forever signifying that their destiny with happiness had forever been dashed.

This scenario transpired in my most recent game of RimWorld, and if it’s any indicator, it is one heavy game. You can choose to begin the game with either a single wealthy colonist, five refugees on the run with minimal resources, or my favorite (and the “classic RimWorld experience”), three crash landed comrades with an average amount of starting supplies.

You can set the game maps size, type of landing zone biome (complete with temperature ranges), as well as the tone of the game’s storyteller. The storyteller sets the game’s overall pacing and difficulty. I personally like the random storyteller (Randy Random), as he adds quite a bit of unpredictability to the proceedings. 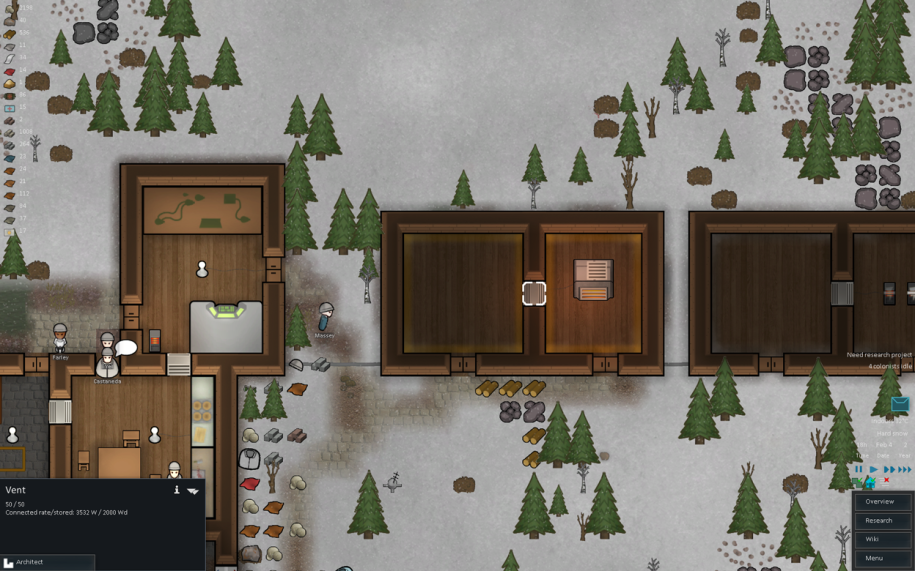 As previously described, as with any survival game, you have your colonists gather resources and quickly erect a starter base. From there, you build up defenses, everything from sandbags to auto-turrets, and also go about the tricky task of managing each of your individual colonists.

I say “tricky” because you’ll usually have at least one problematic colonist, or at least someone with some sort of bizarre idiosyncrasies or psychosis. These can include anything from becoming jealous if any other colonists’ that have more luxurious bedrooms than them, to believing themselves too superior to trouble themselves with manual labor, and so on. Sometimes, due to RimWorld’s emergent gameplay, a pair of your colonists just won’t get along and will begin to insult one another. Sometimes this can even result in them going to blows.

In the meantime, your colony must contend with deadly wild animals as well as roving groups of bandits and other foes. RimWorld can become quite a juggling act, as you seek to develop and manage your fledgling colony while confronting the dangers of operating on a hostile planet. This could seem tedious and frustrating, and at times it can be, but the way in which the game’s developers present you with these challenges never seems like they’re simply cheating. It never feels like the game is throwing hardship after hardship at you just to mess with you, but rather to see how you deal with different situations. One small bad move or decision on your part, however, can spell doom for your burgeoning base and its occupants. 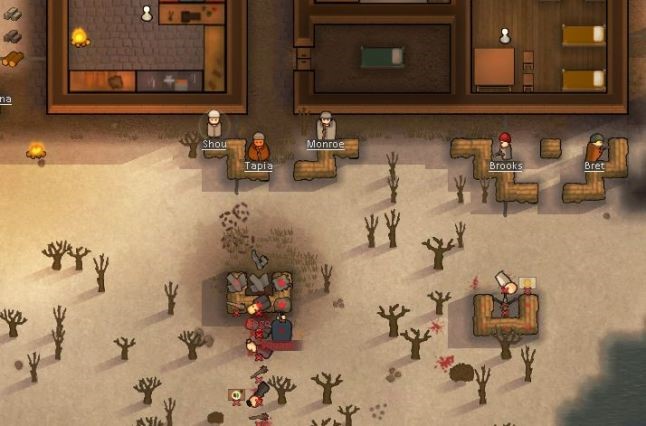 RimWorld has a colorful, whimsical visual aesthetic that is very similar to Prison Architect. You play the game from a top-down perspective, much like many other games that give the player an almost god-like power over your various virtual avatar’s lives.

RimWorld is a fascinating and enthralling gaming experience that is easy to jump into, but due to its steep learning curve, hard to master. Combine that with each game’s unpredictability (due to its built-in emergent storytelling system), and it’s a game with nearly limitless replay value. A friend recently asked me why I’d taken a lengthy break from RimWorld. He’d figured that I’d gotten bored or grown tired of it. Quite to the contrary, I replied to him that I’d begun to care so much about my little virtual characters that I could only take the game in smaller pieces, or sessions, at a time.

RimWorld has some seriously great visuals. However, you have to have an equally fast gaming PC in order to play it at a decent framerate. So, you may just want to invest in a decent gaming rig: