Sometimes, game developers still actually take risks. Back in the day, you had a much larger market for edgy, risqué games, or titles that featured highly original content or gameplay. But throughout the years, much like the film industry, things have become increasingly divided into two camps.

For instance, you have lots and lots of triple A shooters out there that at one end of the spectrum, and then loads of indie (or budget) shooters that have small, niche fan bases. There are hardly any shooters that bridge the gap.

In this way, it seems that you either have big budgeted games that feature safe, dumbed down, politically correct content and gameplay, such as the forthcoming Battlefield 5, or highly tactical shooters created on shoe-string budgets, such as the newly released Ground Branch. There isn’t much in-between. 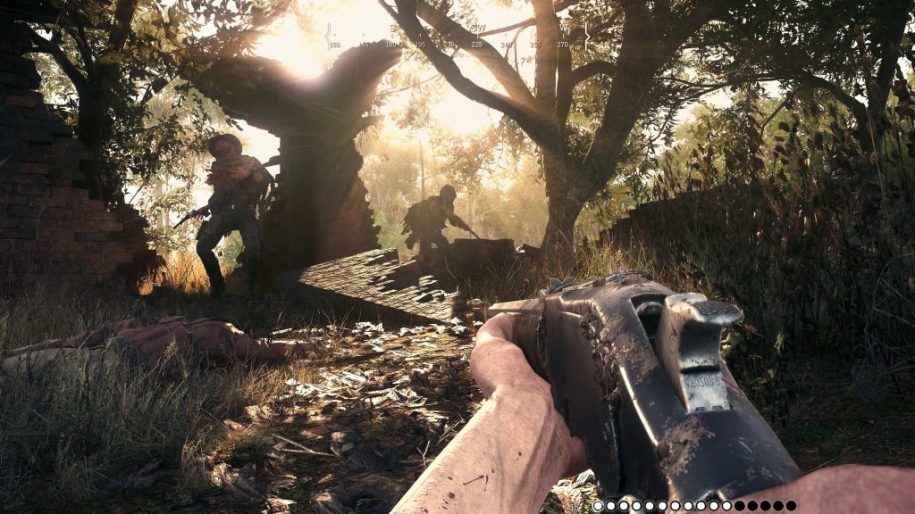 But there are a few developers still out there that are releasing not-quite-triple-A games which contain great production values, but still take chances with their content and gameplay. Crytek’s Hunt Showdown is one such game.

Hunt Showdown has actually been out for quite some time now; since February of 2018. But it was a very messy launch—it was one of the many Early Access cases you’ve probably already heard about (or experienced yourself) where developers released games way too early. Hunt Showdown suffered horrible optimization issues, disconnects, and bugs galore. Therefore, I didn’t feel that it would be fair to review the game in such a sorry state.

Fortunately, Crytek was able to rally and mount a comeback; they’ve updated and patched Hunt Showdown up to a level that is now legitimately playable, albeit with a few lingering optimization issues and bugs. Overall, it’s a far cry from the sloppy product that debuted at the start of the year. 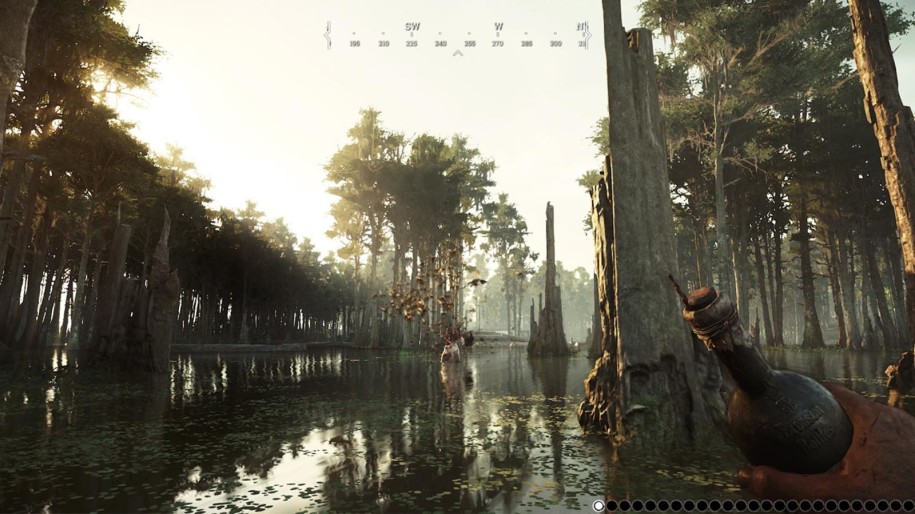 Firstly, let it be known that Hunt Showdown is one of those games that was a risky endeavor, premise-wise, to pull off—even by such a capable team as Crytek. Basically, the game takes place in the late 1800s and has a full-on Wild West theme, even though it’s set in the swamps of Louisiana. That means that you can get into some really crazy and drawn out firefights as gunslingers battle it out in the bayous. That gives the game its shooter appeal.

Each player takes the role of a demon-hunting bounty hunter and can choose from several survival perks and abilities. You, as a player, can choose from a list of bounty hunters and purchase them for money. You can either take them as they are—with their starting weapons and equipment—or purchase additional items for them as you see fit.

From there, you choose a bounty, which means you sign up to hunt down one of two boss demons. But it won’t be easy to find out these demonic entity’s locations. And this is where the cleverly articulated, survival horror aspect comes in (with a little bit of battle royale thrown in for good measure). Eight pairs of bounty hunters are dropped into the game’s single swamp map and have to fight off hordes of greater and lesser evils, such as grunt demons and hags, to rabid packs of demon-dogs. 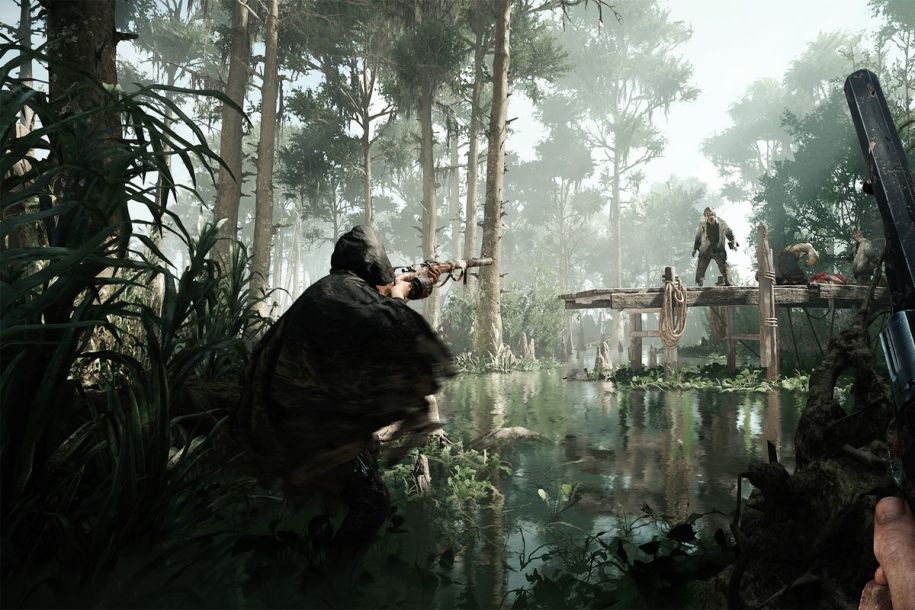 the bounty hunter teams are also going up against each other as well. Each team must roam the large map looking for clues as to the boss’s location by using their supernatural “Darksight” abilities. Once a team has triangulated the location of the main demon baddy, they can swoop in, hopefully dispatch it, and then banish it to hell. From there, they can attempt to exit the map and collect their bounty.

The only thing is, once a team has banished the boss demon, all of the other players can see where they are located on the map. If you’re the banishing team, you have to figure out a way of fading out of the area covertly, or go all out guns blazing (depending on your particular playstyle).

Hunt Showdown features some jaw-dropping visuals that really ooze creepiness. The swampy environs look spectacularly dismal, and the character and creature models look almost photo-realistic. Their movements also look very fluid and natural, as opposed to some of the herky-jerky movements we’ve all seen in lesser, unpolished games. 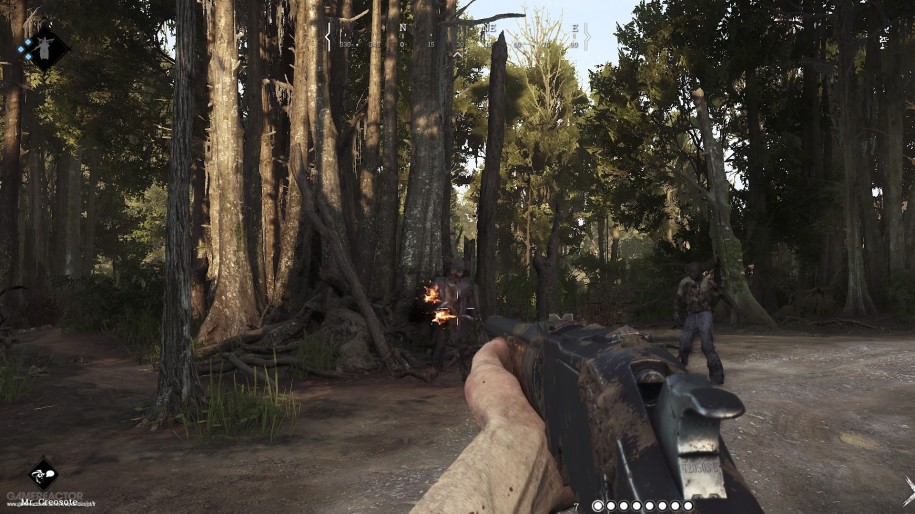 I also wanted to wait to review Hunt Showdown because it now features a new threat—the Water Devil. The devs noticed that many players liked to hang out in the swamp water areas of the map in order to minimize contact with other bounty hunters as well as monsters. So, they added a fearsome, many-tentacled demon that can bolt quickly through the water and entangle bounty hunters in mere seconds. I know, just when you thought it was safe to go back into the water.

Hunt Showdown definitely a fun, immersive experience. It features a combination of other game genres, but somehow pulls them off by wrapping them all up within a refreshing Wild West theme. I, for one, am looking forward to seeing some new maps as well as additional bosses in the near future. But for now, it’s still a great game.

Hunt Showdown features great graphics that make its shooter gameplay truly shine. However, you want to have a pretty beefy gaming PC or gaming laptop in order to play it at a decent framerate. So, you may just want to invest in a decent gaming rig: