Don’t get me wrong here—when my title says “life-draining” I don’t mean that in any sort of disparaging sense. I mean it in a voluntarily addictive one. You see, to sit down and play RimWorld is to indulge in a sublime Experience, yes with a capital “E.” If you view the game’s Steam page you’ll see all manner of glowing (and many times gushing) reviews from gamers who have clustered around this indie cult classic like buzzard buzzing around a couple of shreds of meat left on a carcass.

The metaphor here being that there really isn’t anything quite like this little gem out there right now, and the people who play this game know that. Indeed, RimWorld has emerged as my favorite single-player video game of all time. But, let’s go back to get a little background on things… 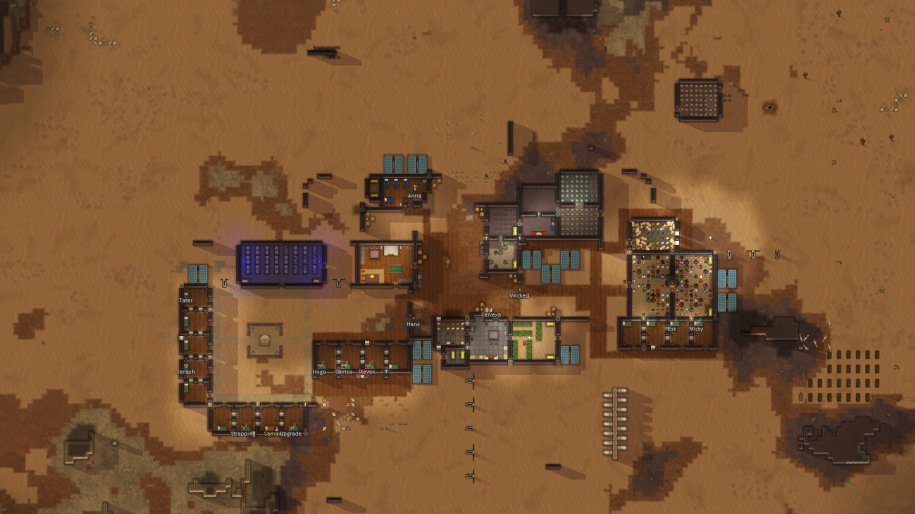 Ironically, when I first laid my eyes on RimWorld a couple of years ago I immediately found it repulsive. I find “cutesy” – looking games childish and usually lacking in depth, and so therefore avoid them like the plague. I’d also recently tried playing both Prison Architect, which I found depressing; and The Escapists, both of which have similar art styles and both of which I found underwhelming to say the least.

A good gaming friend kept telling me to give RimWorld more of a fair chance, so one rainy weekend I obliged…and I never came back. Beneath RimWorld’s simplistic veneer lies a ferociously articulated, extremely well-developed game. All of its various systems—from general colony management down to deciding on any of the multitudinous minutiae—interlock quite well and are actually surprisingly accessible, even to novices of the genre.

In RimWorld, you oversee survivors of a colonial spaceship that has experienced a little boo-boo and as a result, activated its escape pods (hopefully with people in them), sending them careening down to the titular rimworld. Rimworlds are planets that lie at the far corners of known space and as a result are either underdeveloped or hold nary a sign of civilization at all. 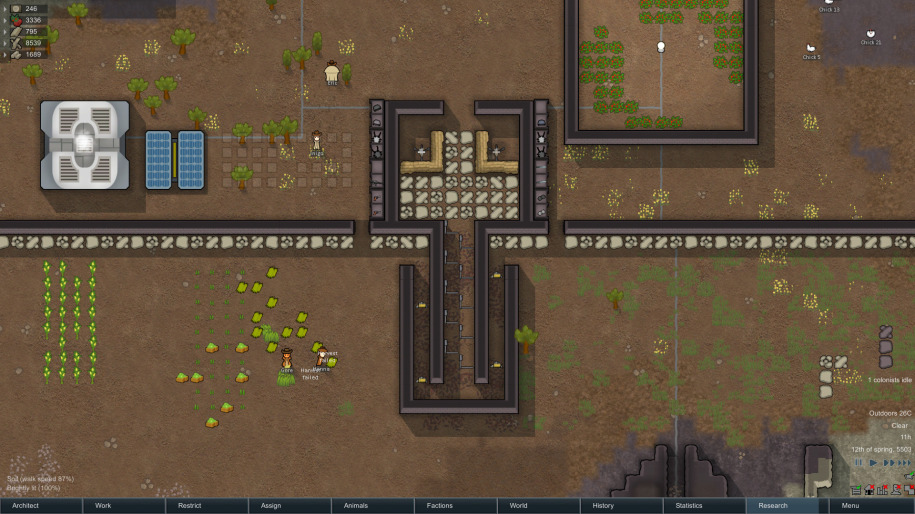 You can choose where you want to land and with which particular survivors, but I play it the “purists” way and accept whatever the game consigns to me straight away. To me, having to survive (and hopefully strive) with perhaps non-ideal characters and conditions is the only way to play the game. Hence: colony “SURVIVAL.”

You also have a choice when it comes to your selection of colonists. You can oversee a single, wealthy survivor; three moderately abled folks (the classic RimWorld experience); a gaggle of five rather primitive sods; or a poor soul with absolutely nothing to his or her name (hardcore mode). After your pod(s) hit the ground you must quickly locate a suitable site for erecting some form of shelter and set about to gathering resources.

From there, the ingeniousness of RimWorld design begins to kick in, because the game’s AI is on another level altogether. Random occurrences will begin to happen to your burgeoning colony that you will have to try and adapt to. Some of these will be so entirely impactful that they’ll shape large swaths of how your particular colony’s narrative plays out. In this way, every game of RimWorld is its own self-contained Greek Tragedy, only you’re actually directing it. 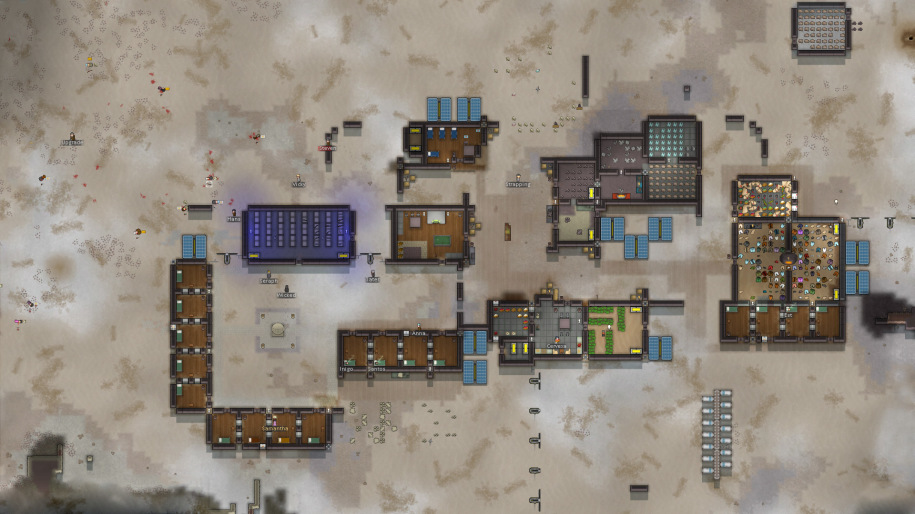 For example, one of my first games involved my band of three random colonists landing on a frozen tundra. I chuckled to myself since one of them was a pyromaniac and was prone to periodically going on fire-starting spats—but how would that be possible on an icy tomb? However, the joke was on me later when she had a mental breakdown and began lighting our base on fire in random places—I guess it hadn’t been such a great idea to build it from wood (doh!).

By the time she was recovered, she managed to burn half of our base down to the frozen ice during her fiery little rampage. But the destroyed walls and beds were the least of our worries; most of our hard-earned food supplies had been reduced to ashes as well.

After resorting to eating our colony mascot (a yappy little dog named Pepe), two of the relatively healthy colonists turned on the firestarter gal. Besides, she was to blame for the calamitous circumstances and had also rebuffed the leader’s many amorous advances anyway.

After ambushing said firestarter, the two remaining colonists dined on her body and thus turned into blood-thirsty cannibals who would waylay anybody who happened to wander into their environs. Thus developed a storyline which completely contradicted what I’d imagined. Whereas I thought I’d build up a colony of peaceful ice-dwellers within a magnificent frozen citadel, my colony had devolved into a crazed cartel of cannibals who would capture folks and then harvest their various limbs and organs for sale, if they didn’t dine on them. 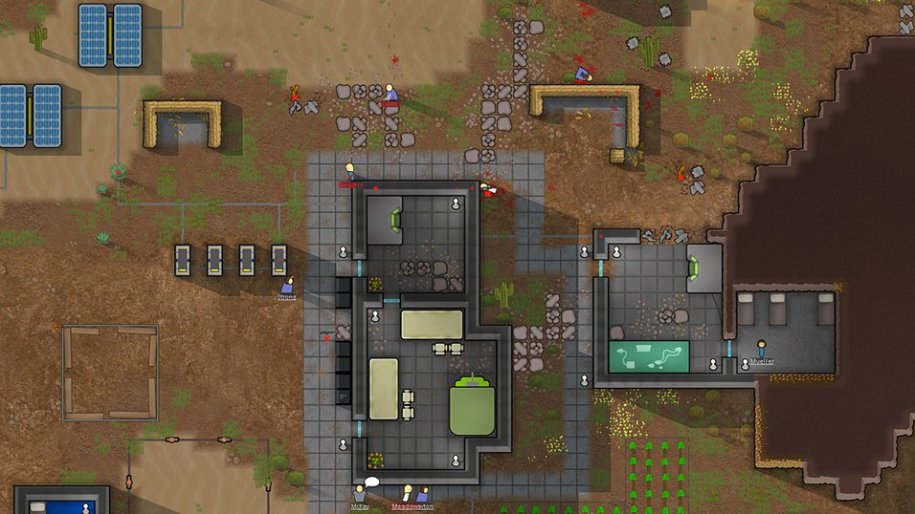 Such is RimWorld’s built-in narrative builder; you never know what actions or random events will cascade into larger, more complex issues that can profoundly affect your colony. Would you like to play as a bunch of seedy drug-dealers? Done. Or, would you like to carefully cultivate the lands around you and become an agrarian powerhouse? Go for it. You can even fulfill any Vermintide fantasies by breeding swarms of rats which you can order to attack on command and eat your foes to the bone. The number of variables present in RimWorld are as vast as your own imagination, and then some.

RimWorld version 1.0 has finally arrived. It really didn’t add much—just the ability to determine what sorts of meals each of your colonists are allowed to eat and a couple of other subtle changes. However, no one is really complaining because what is already on offer is pure, unadulterated storytelling fun that you are an intrinsically part of. RimWorld is currently available for $34.99, although for such a masterpiece I would have gladly paid a triple-A game price.

RimWorld features fun graphics that make its colony management gameplay truly shine. However, you want to have a pretty beefy gaming PC or gaming laptop in order to play it at a decent framerate. So, you may just want to invest in a decent gaming rig: