Our hard-bitten battalion of U.S. Marines had fought an uphill battle in order to advance, but we’d finally done it—we had pushed the Vietnamese forces all the way back to the village of Cu Chi. The Commander was busy instructing each squad in what they were to do after the big artillery salvo dropped. A couple of squads would flank the village from its sides while the others would push directly straight in.

We heard our particular squad leader respond by barking orders at us. We were to approach the village by inserting ourselves into a system of trenches that led directly up to it. That way, we’d be afforded at least some form of cover and concealment when it was our time to move in. 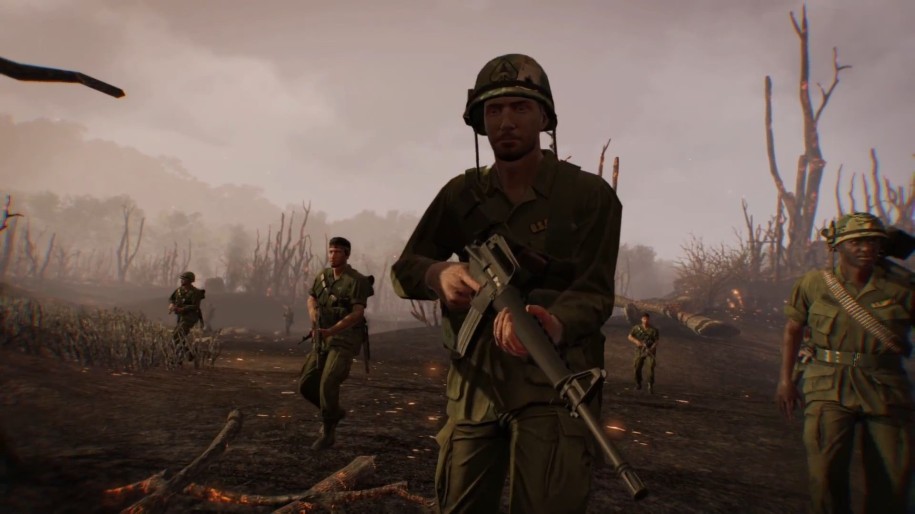 After hastily depositing our posteriors into the muddy trenches, we slinked around in them in a manner which allowed us to get as close to the outskirts of the village as possible. Unfortunately, a couple of our not-so-stealthy squaddies couldn’t seem to keep their heads down, resulting in an eruption of AK rifle fire directed at us.

Our squad leader ordered us to hit the deck, only in a much less polite way than these words describe. As we squatted down even lower in the trenches, we could see the enemy’s green tracers sliced through the air above us. A couple of leathernecks who were unfortunate enough to have their heads peeking over the sides of the trenches, had their melons perforated in grisly displays of instant death.

Suddenly, the squad leader screamed: “incoming!” followed by some crude giggling sounds. We could hear the unmistakable drone of artillery rounds as they approached our area. This barrage would obliterate any enemies located in the village, at least the ones caught out in the open. Even ones who were too close to open doors or windows would be sent to their maker. 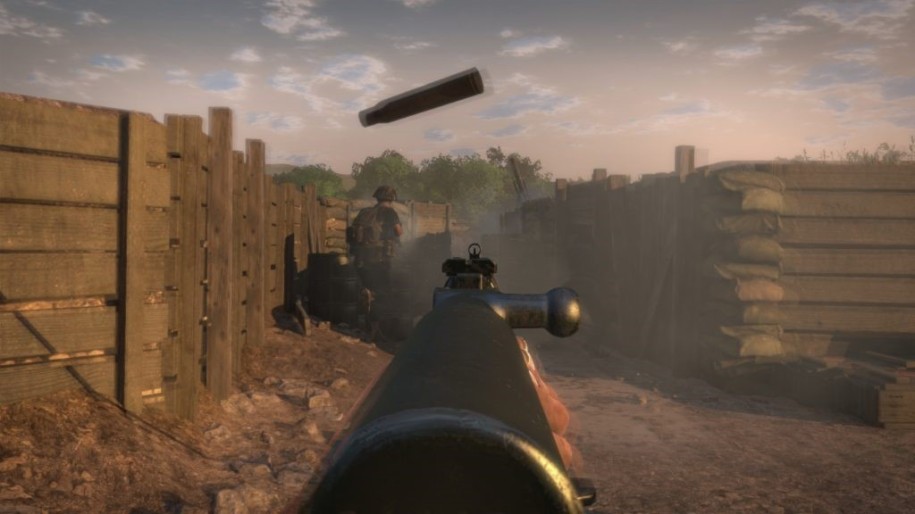 But as the first rounds hit I knew something was wrong. My vision went blurry and everything turned white. Likewise, my ears became deafened as the artillery barrage came down on their mark. Unfortunately, that mark was right on top of us, the friendly forces in the trenches.

As you can see by my first game of Tripwire Interactive’s brand-skanking-new first person shooter, Rising Storm 2: Vietnam, things can go quite haywire if proper teamwork isn’t observed. In this way, a typical game can either be a blast to play, when people are communicating correctly and planning strategies out, or hit the fan when they don’t. 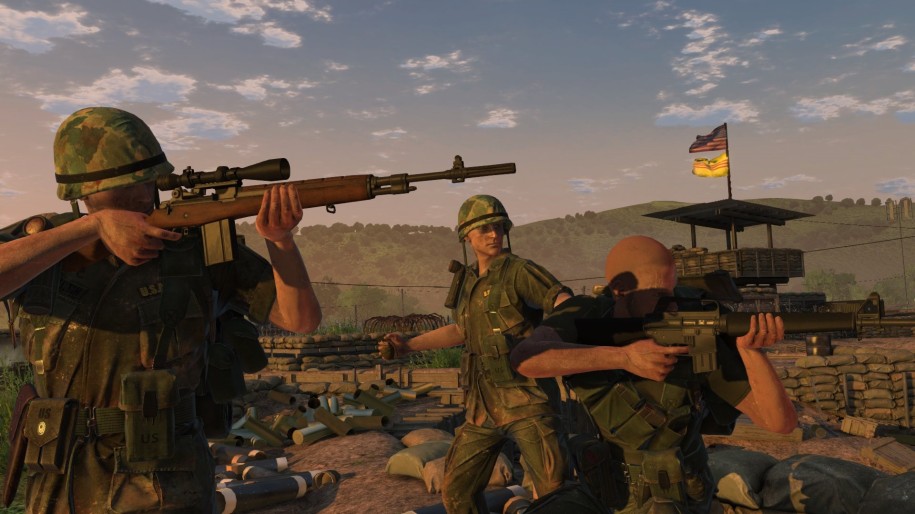 Following in the footsteps of Tripwire’s last effort, 2012’s excellent Rising Storm, RS 2 trades in World War 2’s Pacific theater, for the flimsy hooches and muggy jungles of Vietnam. I’m not sure why there has been a lack of decent first person shooter games based on the Vietnam War. In fact the only one I can think of was 2003’s excellent Vietcong. In any event, RS 2 fills that gap brilliantly.

First of all, RS 2 is absolutely oozing with authenticity. All of the weapons and equipment present in the game seem to be ripped straight from the pages of history. But knowing Tripwire’s penchant for “getting it right” with WW II in the first game, I figured that RS 2 would be no exception.

Gameplay-wise, each round of RS 2 pits either the U.S. Marines or the U.S. Army against the Vietnamese forces. Combat plays out very differently from first person shooters that many people may be used to. Instead of practically being made of Teflon, everybody’s digital avatar in RS 2 is all too frail. A single round that lands anywhere on your body can made your screen fade to black as your character screams and begs not to die. Not only can this be heart wrenching to endure but also frustrating to those who are used to running and gunning it in games.

On top of that, the environments present in RS 2 are rather cramped, giving them somewhat of a claustrophobic feel. Whether you’re traversing through the narrow streets of bombed out urban areas, or trudging through dense and sometimes impenetrable jungle foliage, line-of-sight can be an issue. This makes each map perfect for those who like to set up ambushes. In fact, while playing RS 2 you’ll probably die a lot and not even know where the shot came from, during your first few games (okay probably more like first 20 or 30).

Not surprisingly, the fragility of each individual’s life, plus the closed-in nature of the maps make communication not optional, but essential to survival. I’ve played in many games (okay, it’s addictive alright?) where no one was using their mics, only to see them wind up getting slaughtered by enemies who obviously were utilizing theirs. Fortunately, most squads seem to be keen to using their mics so that’s usually not a problem.

RS 2’s combat mechanics are very tight and fluid, and you can see that Tripwire took the best features of the original RS and enhanced them even more for this game. For instance, unlike most first person shooters, suppression actually is something. If bullets ricochet off surfaces too close to you, your screen will become blurry and you’ll hear your heartbeat thumping heavily in your chest as your screen shakes. And when artillery strikes nearby, you can forget about having any of your senses under your command for a while. They’re that awesome. 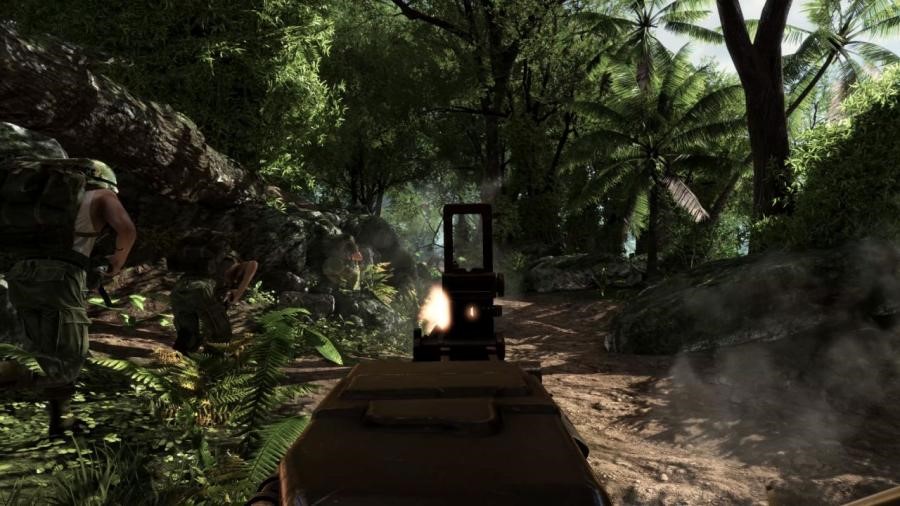 The graphics present in RS 2 are excellent, although you can tell that they’re not as good as any of the triple A titles such as Battlefield 1 or Titanfall 2. However, they do a great job of conveying the vibe of the time—character models look generally good, weapon textures look convincing, and the environments just scream authenticity. Personally, I’d trade in super-glamourous graphics for immersive and intuitive gameplay any day. But that’s just me.

I wouldn’t be surprised if Rising Storm 2: Vietnam became 2017’s dark horse hit of the year. It has incredibly responsive and intuitive controls, superlative combat mechanics, excellent graphics, and really hit the nail on the head in terms of recreating what the Vietnam War must have been like. I mean, try it for yourself—you just might feel as though you’re playing through a really immersive Vietnam action film.

Rising Storm 2: Vietnam features graphics that are more than good enough to wow your friends with. However, you want to have a pretty beefy gaming PC or gaming laptop in order to play it at a decent framerate. So, you may just want to invest in a decent gaming rig: