The Warhammer 40K IP has been steadily gaining steam within the last decade or so. I’m actually pretty surprised that gaming companies weren’t exploiting the WH:40K universe long ago, however, as it’s tailor made for video games. I mean, can you imagine Dungeons & Dragons, but set in the future with science fiction counterparts of classic races such as Elves, Orcs, and the like? And then stir in some savage alien invaders, and top it off with a bunch of totally badass, genetically modified super humans in powered suits of armor (the Space Marines of course).

And even when gaming developers finally did catch on to the IP, the vast majority of the games that they produced based on the WH:40K universe ranged from mediocre at best, to downright dreadful and uninspired. I’m not sure why it’s been so difficult for developers to translate the venerable franchise over to the digital realm, but there you have it.

Fortunately, little-known game developer Streum On Studio threw their name in the hat, and the results were…rather interesting. While their version of the WH:40K universe, titled Space Hulk: Deathwing, was praised for its outstanding art direction and graphical prowess, the game was laden with a ton of bugs. 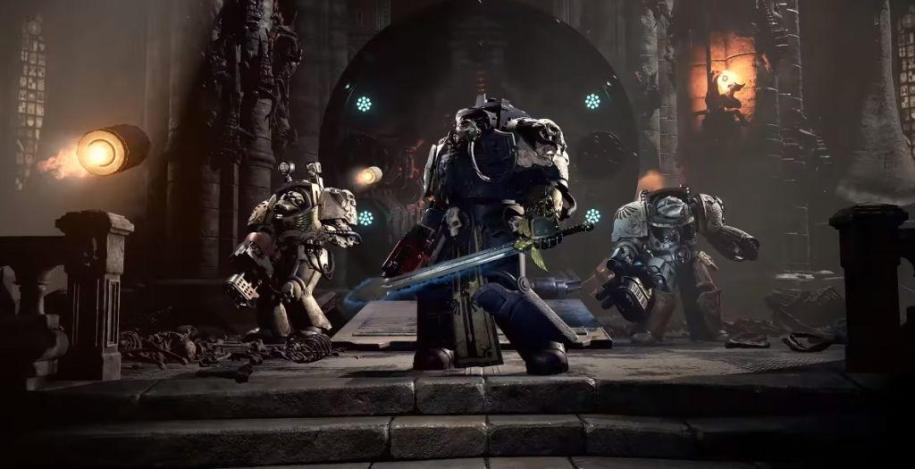 To start with, many of the animations were choppy and sometimes it felt as though the Space Marine Terminators that you were controlling were sliding along on roller skates. There were also lag and latency issues, long loading screen wait times, and a host of other issues. And while Space Hulk: Deathwing’s single player campaign was decently implemented, the game’s multiplayer component was were the majority of its problems lay. For instance, many of the features that were in the single player campaign weren’t included in the multiplayer mode. The game debuted back in December of 2016.

Step ahead eight months now, and we’ve witnessed the gradual recovery of Space Hulk: Deathwing by its developers that can only be summed up by one word: “Miraculous!” Although the first few months were pretty rough, Streum On kept plugging away at their encrusted diamond, introducing update after update. The first ones mainly concentrated on the game’s technical and connectivity issues, and for the most part the game is much more stable now. The most recent updates, however, have consisted of adding additional content such as new weapons, a new class, improved AI, and a new mode. 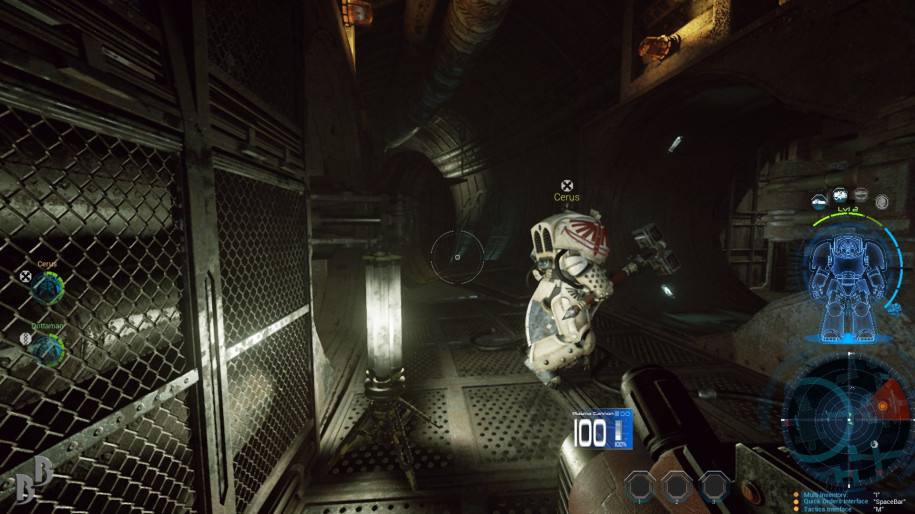 For those not in the know, Space Hulk: Deathwing is the digital representation of the Warhammer 40K tabletop board game. It revolves around an elite detachment of Space Marines called the Deathwing who are tasked with finding drifting debris called space hulks, and investigating them for any sort of valuables. Space hulks, within the WH:40K lore, are gigantic amalgamations of abandoned spaceships and space stations, asteroids, and other interstellar debris that have coalesced together in one big huge mass.

Space hulks may contain items and equipment from ancient, forgotten ages, such as powerful alien technologies and weaponry. Unfortunately, these places also attract other races besides humans. These include the evil Chaos Space Marines, the savage Orks, and last but certainly not least, the voracious Tyranids. The video game adaptation of Space Hulk: Deathwing concerns itself with the latter, and the game consists of the players taking on the roles of various Deathwing Terminators as they attempt to purge a particularly dangerous space hulk of a Tyranid infestation. 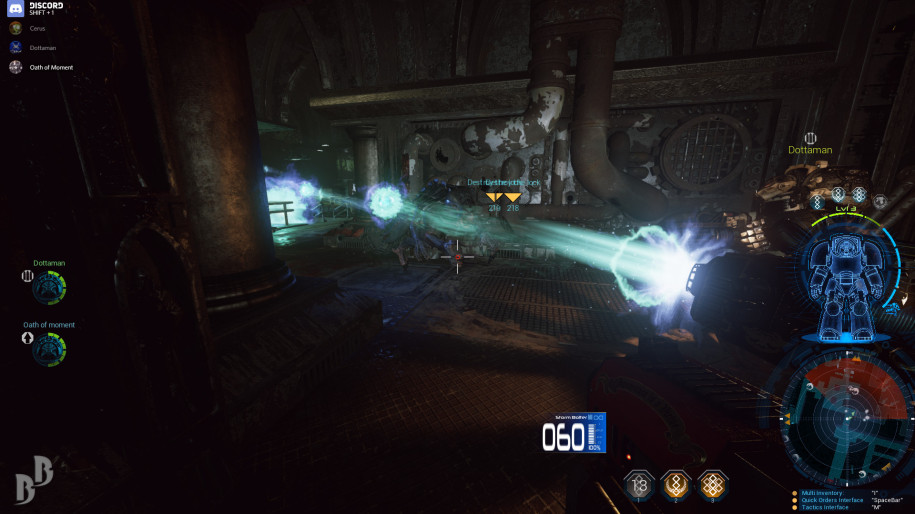 You can think of Tyranids as H.R. Geiger’s Aliens, but on steroids—these things are seriously mean. Not only that, but since they are virtually limitless in number, they tend to be extremely swarm-y. Therefore, it’s a pretty cool match-up if you think about it: An elite force of honor-bound super soldiers outfitted with potent weaponry and donning uber-tough armor; up against terrifyingly monstrous super-bugs that are out to take over or devour anything in their path.

I must say, Streum On has certainly captured the feeling of wearing a super-hardened suit of Terminator armor. Deathwing squad members move slowly and ponderously, as they should, and you really get the sense that they are massive, lumbering Space Marines. The game’s developers also got the weapons right for once. Whether it be a storm bolter or an assault cannon, each weapon feels weighty and contains a sense of gravitas. 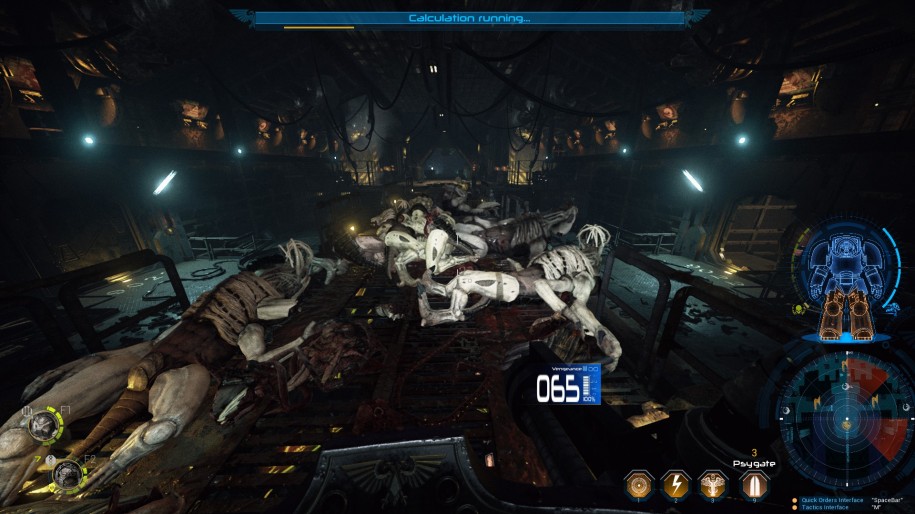 Space Hulk: Deathwing’s graphics are also lovely to behold, and really pay homage to the lore of the WH:40K universe. You’ll see pipes and vents emitting steam, dark corridors with wires winding down throughout them, and intricate cathedral areas with all of their gothic stained glass and pipe organ glory. I’ve never seen such a faithful adaptation WH:40K in a game before.

One of the game’s newest updates feature a new class called the Interrogator Chaplain, which can not only cut a wide swath through rivers of Tyranids, but also has the powerful ability to revive teammates who have fallen in battle (the Reinforce ability). There are also some new weapons to play with, including the new Stormbolter MK2, as well as the Purgatory Sword. 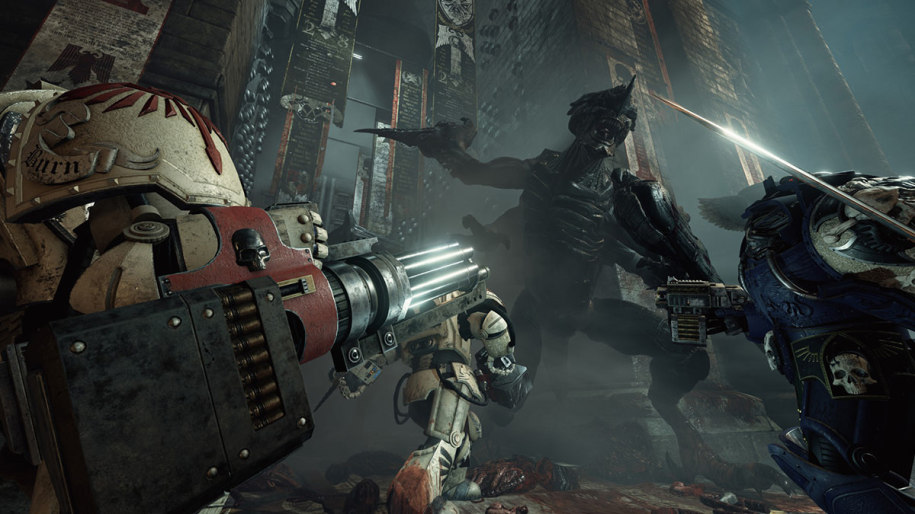 In all, Space Hulk: Deathwing has really come a long way since its tumultuous debut, and I’m really having a lot of co-op fun with my gaming friends after diving back into it. It still has a ways to go before it can really shine like the jewel that everyone knows it is capable of becoming, but I have faith that its developers will keep its trajectory shooting skyward.

Space Hulk: Deathwing features pretty good graphics that make its savage combat theme come alive. However, you want to have a pretty beefy gaming PC or gaming laptop in order to play it at a decent framerate. So, you may just want to invest in a decent gaming rig: