Many gamers have fantasized about escaping from a prison. I mean, who didn’t get a jolt of satisfaction when Tim Robbins and Morgan Freeman escaped at the end of The Shawshank Redemption? Curiously, however, there has been a noticeable absence of prison escape simulators. Well, we do have Prison Architect, but that game is more about managing prisoners and preventing them from escaping, not the other way around.

A few years ago, the original prison break-out simulator, The Escapists, debuted to all kinds of fanfare. People just loved the retro-styled graphics and humorous tone that the game brought to the table. Just as with Prison Architect, it had a quirky, top-town view, with a minimalistic UI that suited its straight-forward, yet complex gameplay. 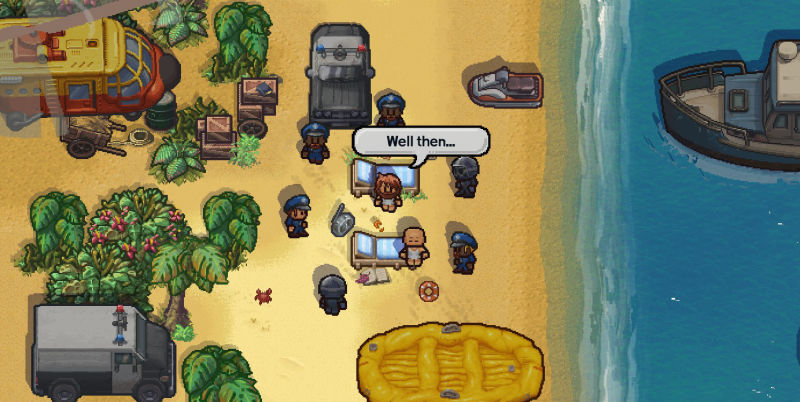 Well indie game developers Moldy Toof are back at it again with The Escapists 2, a bigger, badder prison break-out experience than the original. Probably the most exciting aspect of The Escapists 2 (at least as far as I’m concerned) is that fact that this time around you can play the game with friends. That’s right, The Escapists 2 features both co-op and adversarial multiplayer modes.

The gameplay itself boils down to pretty much one objective—escaping each prison (big surprise there!). There are eleven prisons on hand to try and escape from, but only three of them are unlocked in the beginning. The Escapists 2 offers a new type of prison to the mix that differentiates itself from the original: Transport prisons. 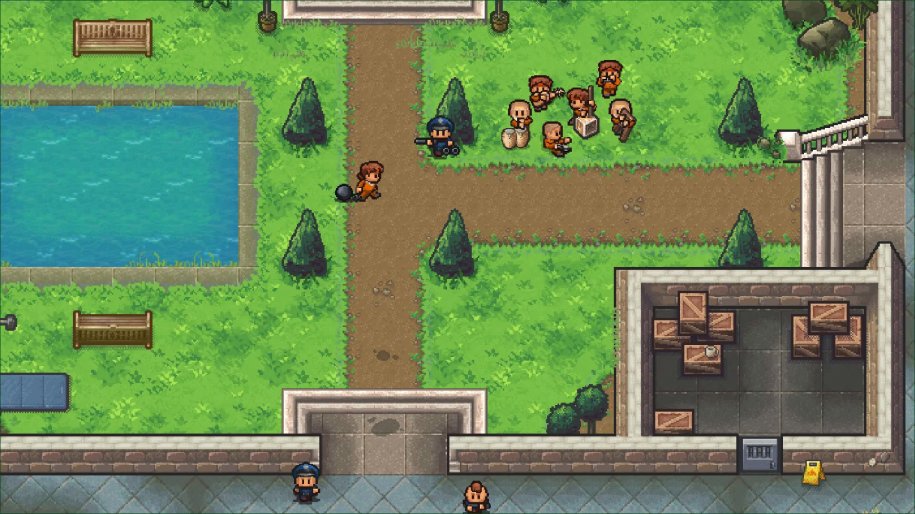 In these traveling prisons, your little digital prisoners literally being transported across country to some final (unwanted) destination. These special prisons-on-the-move differ from your standard ones in that they not only have a time constraint, but also are also a space constraint as well. Therefore, their cramped nature makes it harder to hide from guards when you want to do stuff like craft illegal items such as shanks or any sort of tools.

The Escapists 2 features a really fun crafting system that allows you to create all sorts of weapons and other useful items. The most important ones, of course, are the tools you’ll require in order to break out of the prison that you’re locked up in. What’s in the way of being able to craft things whenever you want to is each daily routine. Each prison has a set schedule, or sets of routines, that it adheres to. For instance, in the mornings you’ll have to attend roll call, as well as breakfast time, while throughout the midday you’ll have to work a job and hit the exercise yard. 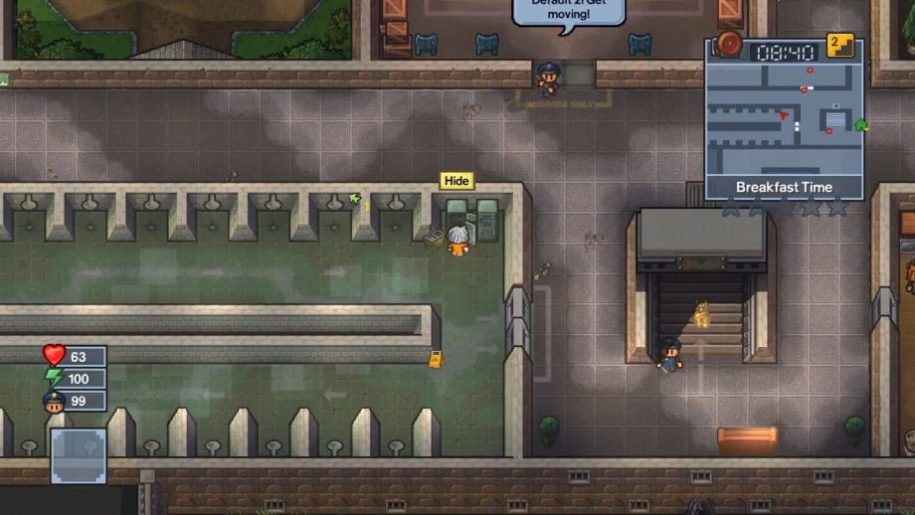 Each prisoner has three main stats—strength, fitness, and intellect. Strength can be built-up by lifting weights, while fitness can be boosted by cardiovascular exercise. Intellect, on the other hand, can only be improved by visiting the library and getting your learnin’ on (reading books). A prisoner’s intellect is perhaps their most important attribute, since it allows them to craft the higher level items. These include such things as pickaxes and shovels—the tools you’ll need in order to make your escape attempt.

One of the things I really like about The Escapists 2 is that there is no single method with which to escape a prison, there are many. For instance, after draping a bunch of bed sheets over the bars of my cell in order to avoid the penetrating eyes of the guards, I dug a hole in my cell wall with a pickax and made my way through to the outer perimeter. Another time, I crafted a special key, which I then used to unlock a room that had a large air vent it its ceiling. After jumping up onto a table, I used another tool to crank open the vent’s opening and crawled my way through it into another storage room. Then, I tunneled through the floor in order to make my escape. Half of the fun is simply devising a mischievous plan in order to escape. And it’s even more fun when you’re playing with a co-op partner since you can aid each other in your escape plans. 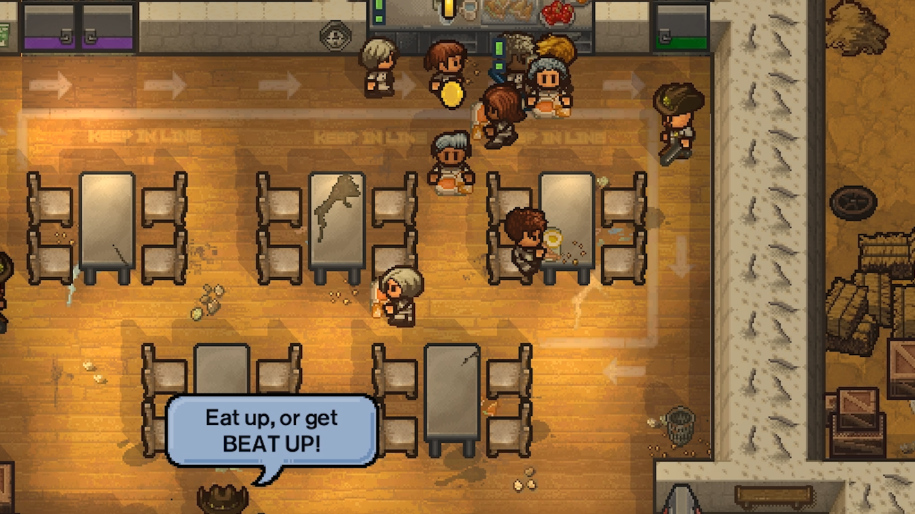 As mentioned earlier, The Escapists 2 features some charming minimalistic graphics that are reminiscent of Rimworld and Prison Architect. Its UI is uncluttered and comes with helpful tooltips that pop up when you hover your mouse over any of the items or buttons that you can see. Frankly, I really liked the almost whimsical and cheery visuals since they elevate the mood of the subject matter, which would normally be drab, dour, and depressing. You can’t even die in The Escapists 2—if you happen to get beaten up by either guards or other inmates, you’ll merely be carted off by the prison’s medical staff and placed in an infirmary briefly, until your wounds mend up.

In The Escapists 2, you can also take on missions that other inmates will present to you. These can range from very simple things such as delivering some form of contraband to another inmate, all the way up to having to teach certain individuals lessons by throwing them a beating. In the latter case, you have to be very careful since other inmates may also be packing weapons. There were a few times when I attacked inmates with my bare hands, only to result in them turning around and producing baseball bats or shanks, with which they commenced to clobbering/stabbing me with. Therefore, strategizing is key here. 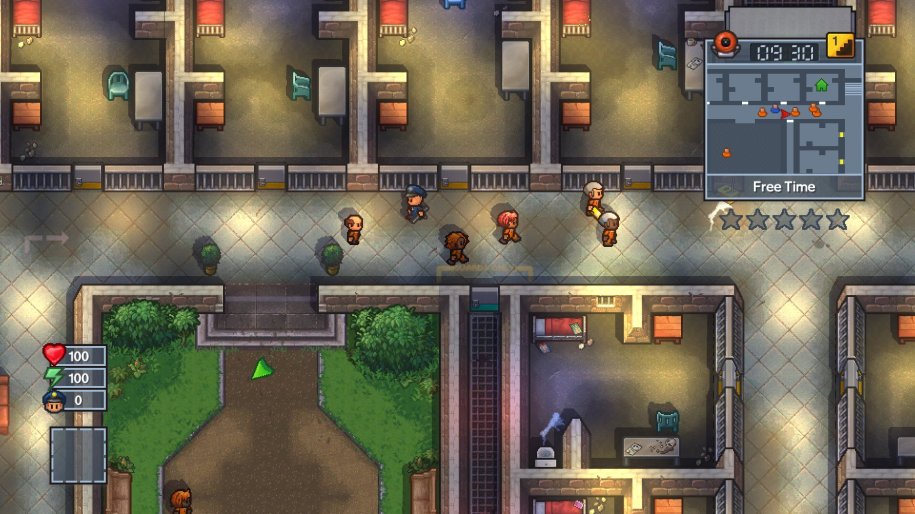 The Escapists 2 is an absolute blast to play. Its catchy concept is executed with such charm and levity that it takes a rather dreary premise and lifts it to silly and surreal proportions. The only drawback that I noticed with the game was that it crashed quite frequently, and I wasn’t able to keep everything that my character had earned. However, I’m certain that the developers will fix this issue in some future patch or update.

The Escapists 2 features great graphics that make its fantasy theme come alive. However, you want to have a pretty beefy gaming PC or gaming laptop in order to play it at a decent framerate. So, you may just want to invest in a decent gaming rig: