I rarely get butthurt about anything. Although I frequently get cut off in traffic, I almost always shrug it off and keep on rolling. If someone is sitting on a piece of workout equipment at the gym for ages, mouth agape while twiddling their uber-important little lives away via texts, I just laugh it off and wait patiently. But for some reason, I really get my knickers all up in a twist when it comes to ruining gaming franchises.

When Warhammer 40,000: Dawn of War originally debuted, way back in 2004, I thought I had died and gone to heaven. Not only did they introduce an ingenious squad system, which not only indicated each squad’s health and morale at a glance, but it also gave gamers a sense that they were fighting large scale conflicts with a vast array of troop and vehicle types. 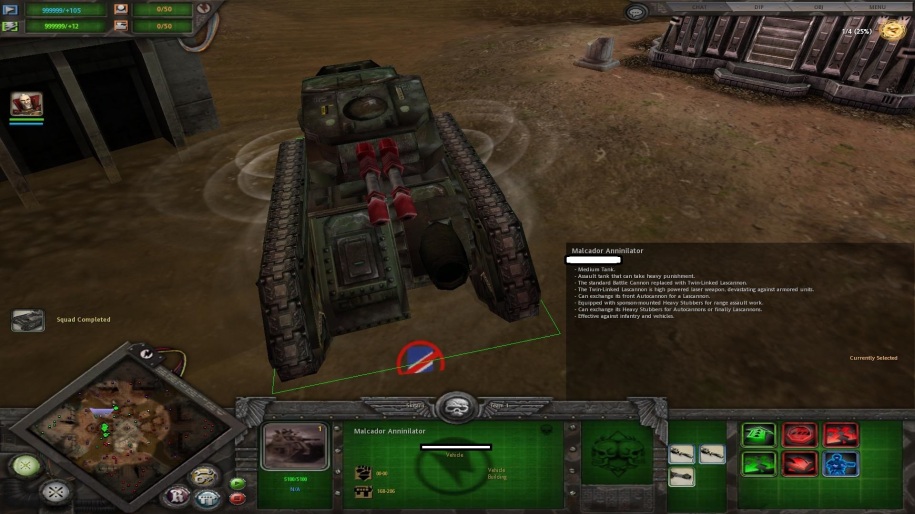 Together with its three expansions (remember the days of full-fledged expansions? Gasp!), Warhammer 40,000: Dawn of War gave players a total of nine factions—the Space Marines, Chaos Space Marines, Imperial Guard, Eldar, Dark Eldar, Necrons (yikes!), Sisters of Battle, Tau Empire, and of course, the multitudinous Orks. The sheer number of factions, plus the fact that they all played completely differently from one another, provided us gleeful gamers an almost limitless variety of matchup possibilities.

Then Dawn of War 2 came along. Apparently giving into the throngs of prepubescent gamers who clamored and whined about slower paced, base building RTS’s, as being too boring, THQ caved in and further sped up the gameplay speed of the sequel, and also turned it into some sort of MOBA hybrid monstrosity. Although the graphics were better, it lacked the epic-ness of its predecessor because of its smaller scale and focus on close quarters combat.

Fans of the franchise responded in kind by hemming and hawing (myself included this time around) about DOW2’s lack of proper base building, and its smaller scale. Relic Entertainment has since taken the reins of the Dawn of War franchise over from THQ, and announced Dawn of War 3 back in May of 2016. At first I was all giddy after watching the DOW 3 announcement trailer. But when I first witnessed snippets of DOW 3’s actually gameplay, my heart sank. 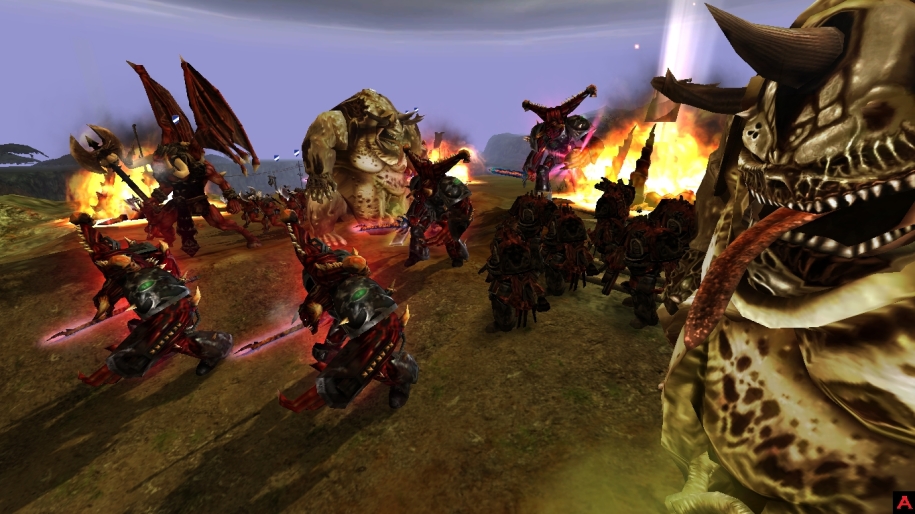 Gone was the grimy, gritty, Warhammer 40K aesthetic, and serious tone of its blood-drenched universe. In its place are now bright, shiny units, that hop around at breakneck speeds, including a few particular absurdities such as Space Marine stalwart Gabriel Angelos doing spastic flips in his terminator armor. Needless to say, I (as well as many legions of gamers) am very skeptical of how DOW 3 will turn out when its released next year. Relic even went the whole feminist/politically correct route by introducing a female walker unit within the Space Marines faction.

Luckily for me, as well as many longtime fans of the first Dawn of War game, I learnt about the Ultimate Apocalypse mod a couple of years ago through word of mouth. It had garnered a top 10 stop amongst the ModDB Mod of the Year awards multiple times, and also had a strong and active player base. But what exactly was so unique about the UA mod? 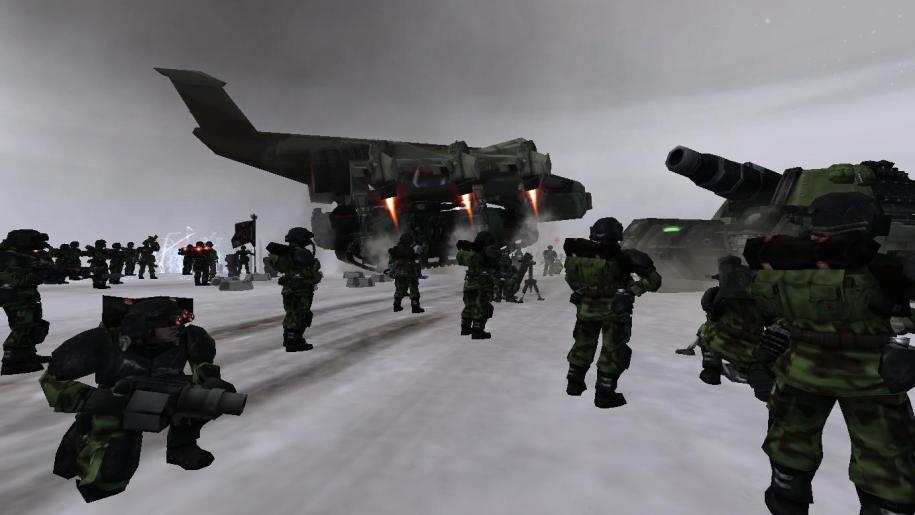 Well, for starters, the mod indeed still features the same control point capture-based gameplay of the vanilla version, but almost everything else is bumped up to the Nth degree. This includes a veritable plethora of new units, including additional troop types and vehicles (as well as new abilities), expanded super weapon options, new maps, three completely new factions, and titans. No, that was not a typo: Titans.

All of this additional content offers truly limitless replay value, as you can mix and match factions (and even specific divisions within a faction) up against one another. For instance, one of my favorite match ups is playing 2v2, where I play as the Imperial Guard and my partner plays as another Imperium of Man faction, and we go up against two Tyranid opponents. To me, that particular match up really nails the Starship Troopers vibe, of humans fending off waves of ravenous aliens. On one side you have the Imperial forces building up base defense, such as mines and turrets, while the aliens attempt to swarm, and eventually overrun them. I prefer to play the UA mod on the very slow game speed, since the game’s default speed is already pretty fast, and can hamper your ability to micro each of your squads.

In addition to introducing the swarm-y and voracious Tyranids back into the mix (a faction that was sorely missing in the vanilla version), the UA mod also comes with the fascistic order of Imperial zealots known as the Inquisition Daemonhunters, as well as their powerful and malevolent nemeses, the Chaos Daemons. This offers gamers even more variety with regards base game, as well as many “what if” – style dream match ups. 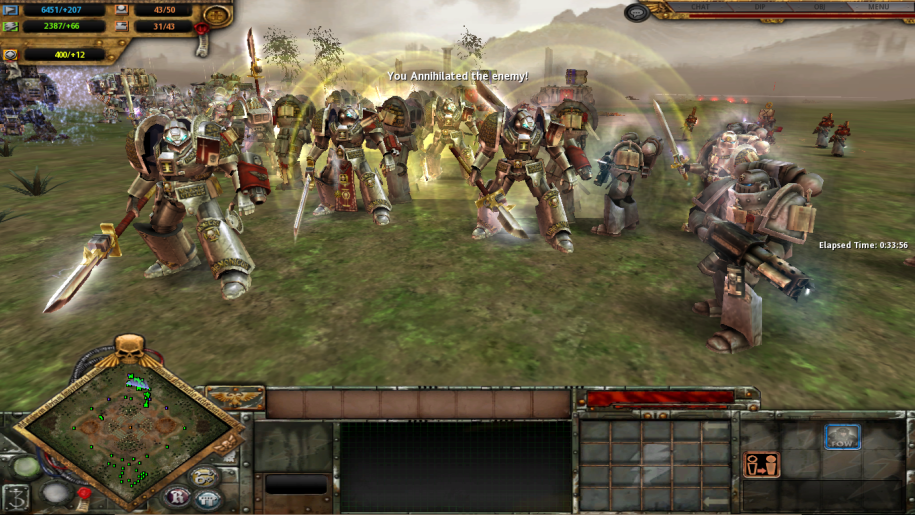 As exciting as all of the additional units and structures that the UA mod provides, one of the biggest main attractions of the mod has to be the titans. These lumbering behemoths are horrendously expensive (as they should be) and uber powered, so going about building one can be a big risk. Players who even think about constructing a titan have to develop a sound strategy for doing so, as the resources required for their erection cannot be used to field larger armies. Should you gamble with a smaller force and go about building a titan? Or perhaps field a larger force and opt for a less expensive super weapon? Which will still, by the way, take a lengthy period of time to construct.

The UA mod also touches up the base game’s visuals here and there, with more detailed troops and vehicles, and sharper looking buildings and other structures. On my CyberpowerPC gaming laptop (with GTX 980) it really looks good for its age, and looks like a game that might have come out four or five years ago, instead of twelve.

The Ultimate Apocalypse Mod for Warhammer 40,000: Dawn of War is a no-brainer for any fan of the golden age of classic base-building RTSs. It offers a whole host of customization options (remember when you used to be able to adjust an RTS’s game speed?), loads and loads of additional content, and polished game mechanics that just feel right. Try it out right now for free. Once you do, I doubt you’ll ever play the vanilla version again.

Warhammer 40,000: Dawn of War – Ultimate Apocalypse The Hunt Begins Mod (whew!) offers some absolutely splendid visuals. However, you have to have an equally fast gaming PC or gaming laptop in order to play it at a decent framerate. So, you may just want to invest in a decent gaming rig: 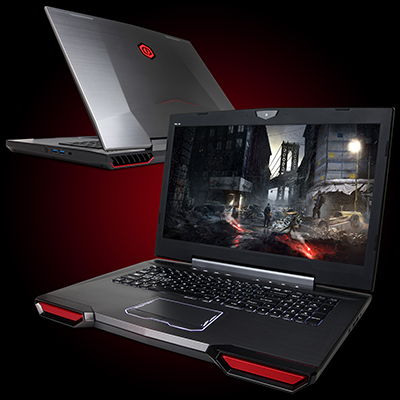