I’d heard about Lesta Studios’ MMO (Massively Multiplayer Online) game World of Warships but hadn’t really given it much thought. I even checked out some pre-release videos and thought that they were sort of meh. Maybe it was because naval warfare never really appealed to me; or at least in a form that was both palatable and fun in a video game format. I’d seen the recent action film Battleship, but that was a big-budget Hollywood film and I didn’t see any games that had come close to the intense naval battle scenes within it.

Then I found out that World of Warships was free to play, so I thought: “what the heck, I’ll at least try it out.” After all, droves of folks in the PC gaming community had been creating a big ruckus about it as it neared its mid-September beta release date, so part of me wanted to see what all the ballyhoo was about. 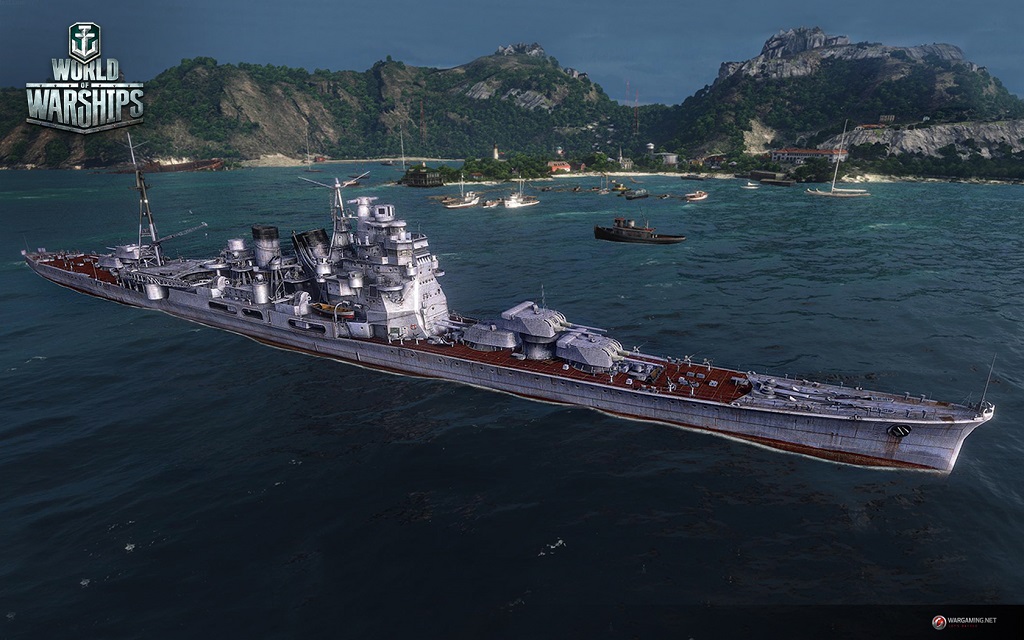 After firing the game up, I noticed the rather straight forward home screen. There was a balance of starting currency, a couple of beginning cruisers to start with (your choice of either American or Japanese), and a few option buttons including one for jumping right into battle. And that’s just what I did, after selecting a U.S. Navy Erie class patrol gunboat. Tipping the scales at around 2,700 tons and reaching a height of over three hundred feet, the Erie is one of the smaller vessels in the game, just to give a relative sense of scale.

In moments I was staring at the Solomon Islands, a famous battle zone (or infamous – depending on your perspective) during the first half of the twentieth century. I fired up my cruiser’s mighty engines and was soon rumbling along at 20 knots. I saw that I had joined an 8-on-8 battle, and being a rookie, steered my ship behind some of the more seasoned players with their stronger ships. 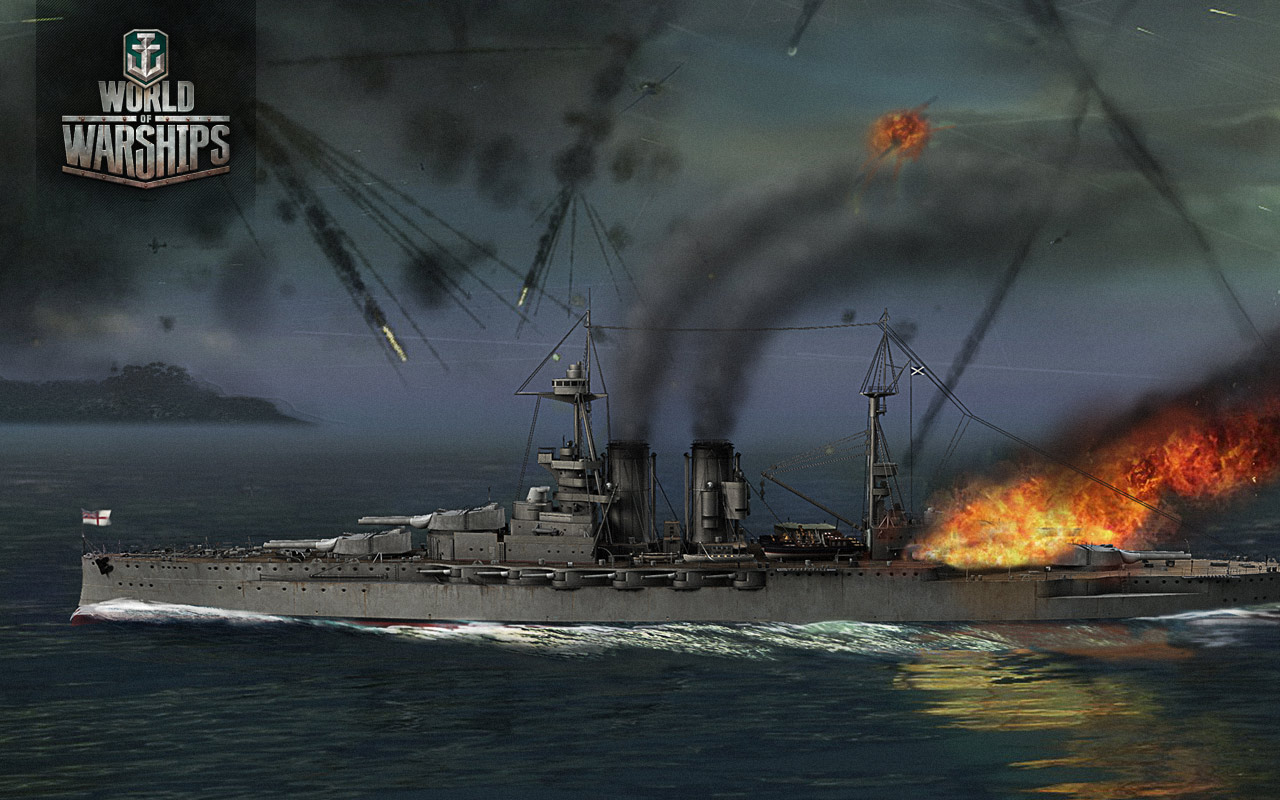 I found myself traveling behind a couple of friendly ships that shot straight through a couple of the larger islands, and soon beheld them take and return fire at a battle group of three enemy ships. Not too long after that, my allies were smoldering wrecks, but they’d likewise caused all but one of our adversary’s ships to go down. I swung my gunboat around in order to bring to bear all four of her 127mm guns on my foe, an ISN (Imperial Japanese Navy) Katori light cruiser. We blasted away at each other while moving back and forth in an effort to muck-up one another’s aim, but in the end I dealt the final deathblow, sending my enemy to the bottom of the sea in a twisted mass of metal.

So intense were my first several matches that I played on, momentarily forgetting that I was supposed to review the game, not play it for hours and hours. Needless to say, I was off about there not being engaging naval wargames; I’d just found one. 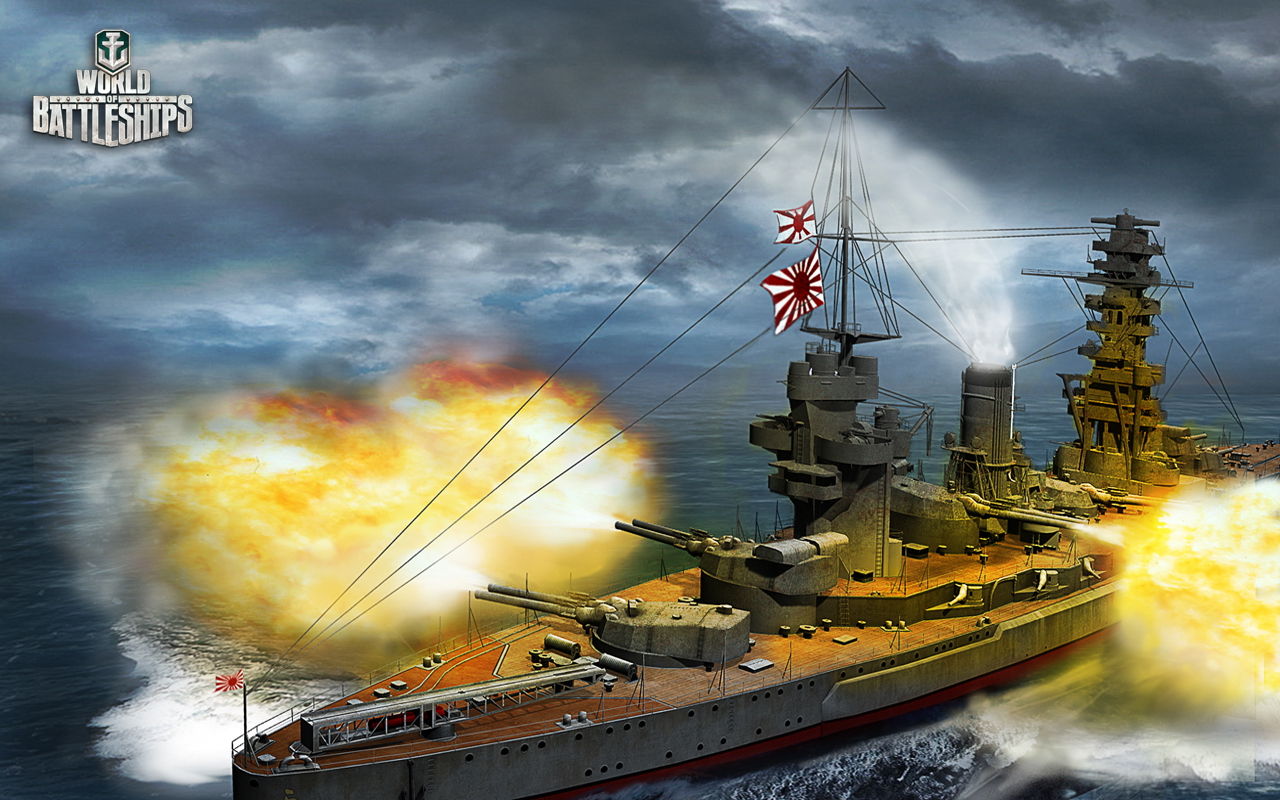 One of the initial things that impressed me about World of Warships was the gameplay. It was more slow-paced and deliberate than many war games I’d played in the past. In this regard, it really makes you feel that you’re in command of a mighty floating battle-platform, navigating across deep blue seas in an effort to outmaneuver the enemy, as opposed to a speedboat. Controls were easy to figure out, and both steering your ships as well as swinging your guns around (some vessels have multiple gun batteries) became intuitive in no time. No tutorial present—and likewise none needed.

Another aspect of World of Warships was the sheer variety of ships that you can eventually gain access to. Cruisers are the bread-and-butter mainstays of any fleet, with well-balanced firepower, speed, and armor. Destroyers are faster, have torpedo tubes, and are more maneuverable, but have weaker armor. Battleships, on the other hand (the big boys of the perilous seas), have thicker armor and sport massive gun batteries, but have to be positioned carefully in order to get the most out of their hulking fuselages and aiming arcs. 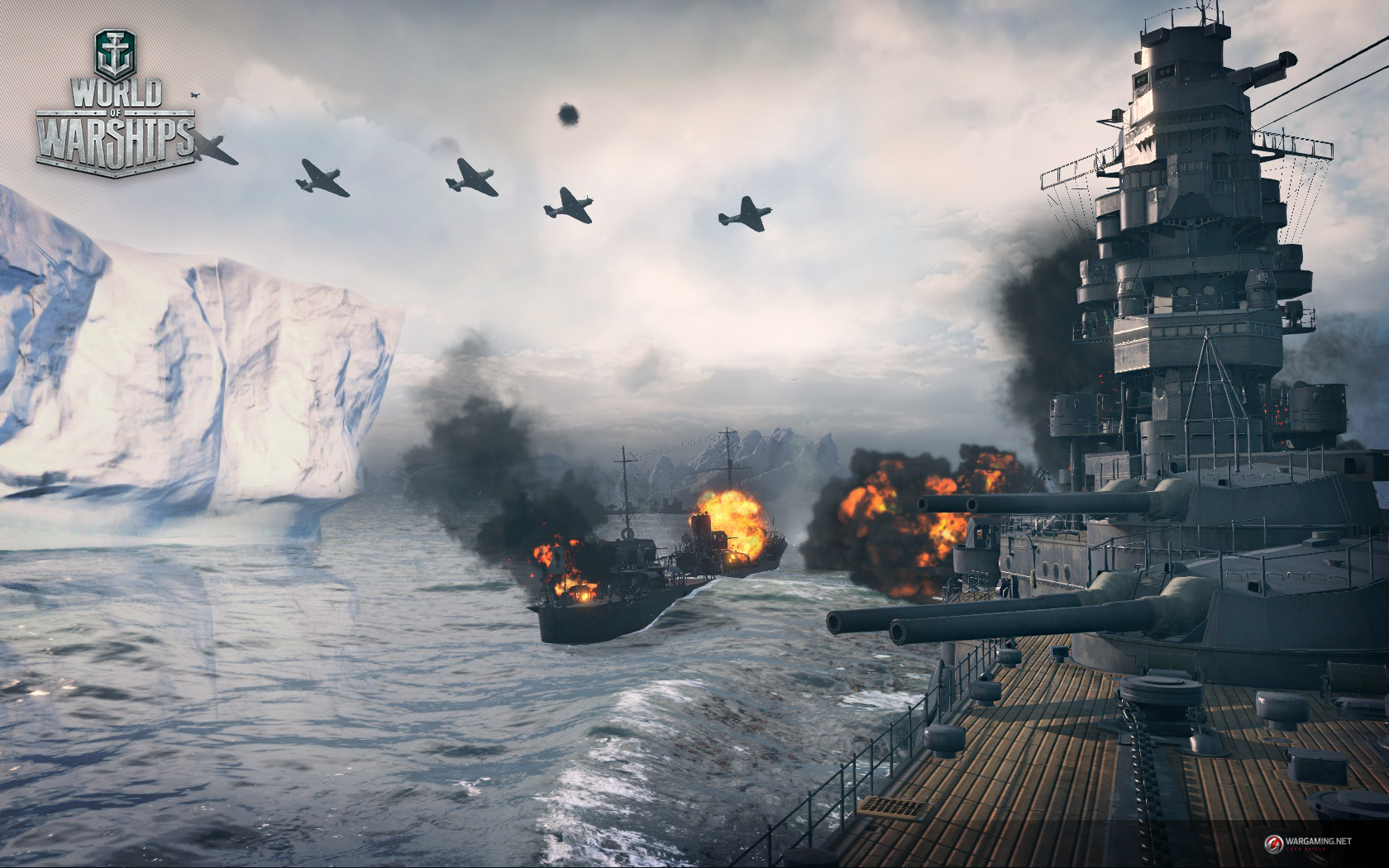 There are also aircraft carriers, which are a different animal (or should I say fish) altogether. These large floating platforms (literally) host wings of various types of aircraft; straight ahead fighters, to dive bombers and even torpedo planes are at your disposal. Since aircraft carriers aren’t the best at direct ship-to-ship combat (they were never designed to be so), they are best kept on a map’s edge, far from within range of enemy ships. In this way, they function as purely strategic assets and turn the game into an RTS, since they are played primarily from the overhead map. Micromanaging your aircraft from afar in order to aid friendly ships in trouble and deal out damage to enemies can be a blast, although these mighty vessels can only be played after advancing to Tier 4.

Advancement, and in turn, gaining access to better ships, weapons, and equipment to outfit them with, can be either be gained by in-game battle experience or purchasing them directly with real cash-ola. Those with the patience to stick it out by doing the former will probably enjoy it immensely, although a few of the premium upper-echelon ships can only be paid for with actual money (at least for now). 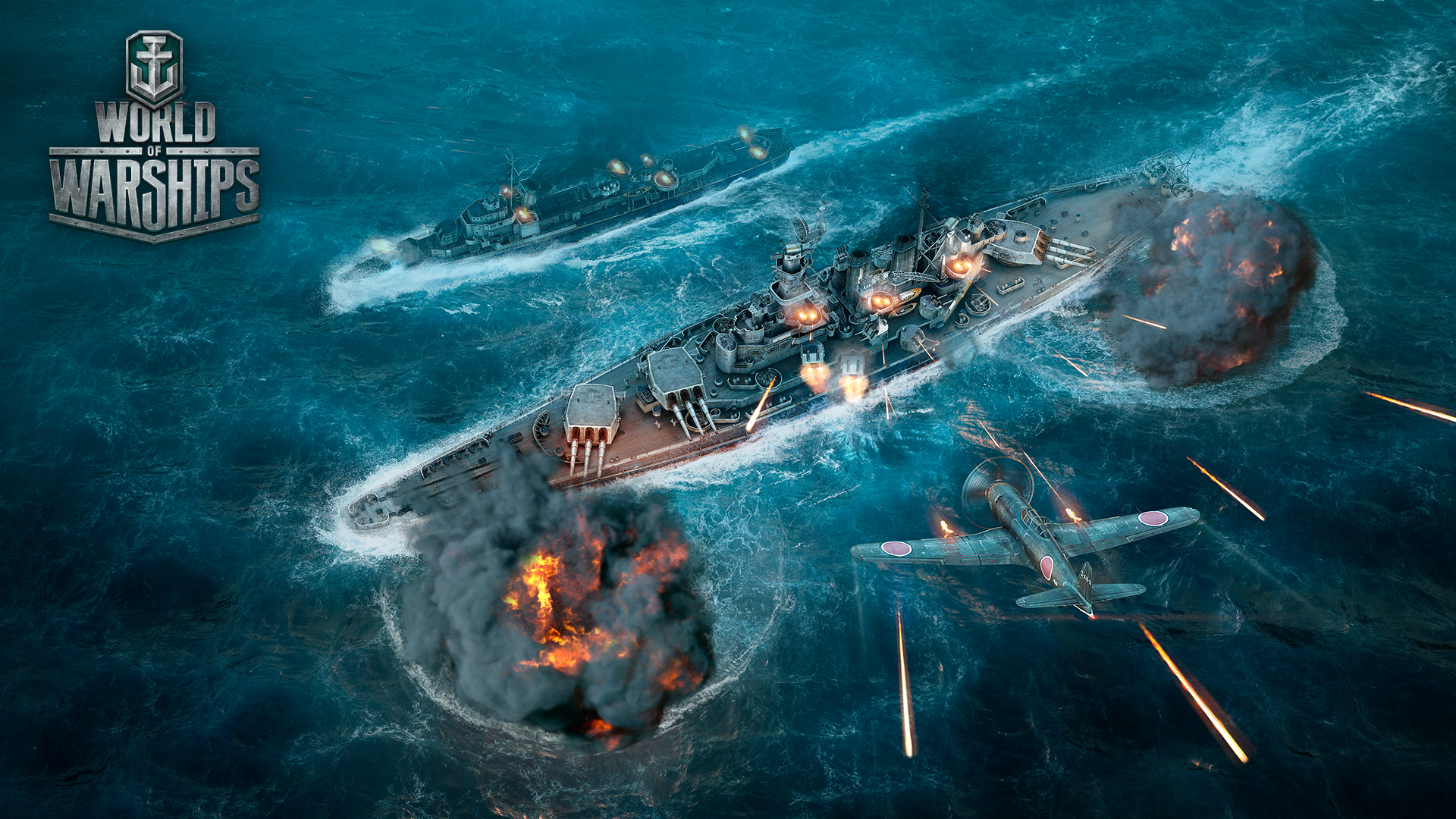 I found World of Warships to be an incredibly accessible game to jump right into, while rewarding patient, more strategic-minded PC gaming folks—a perfect combination as far as I’m concerned. So far for the beta, there are the United States and Japanese navies to play as, but Lesta Studios has plans for German, British, and Russia factions as well. There’s a lot under its hood to discover already, and much pulse pounding combat to be had, making World of Warships one of the more memorable free-to-play games to date, and one that other gaming companies would be wise to replicate.

World of Warships is beautiful to behold (especially by those with 4k gaming rigs), with realistic metallic ships textures, vibrant skies, and rolling seas to be enjoyed. However, even those with mid-level gaming machines have reported experiencing some slowdown on higher graphics settings. Consider upgrading your rig if you want to get the most out of this visual feast for the eyes: 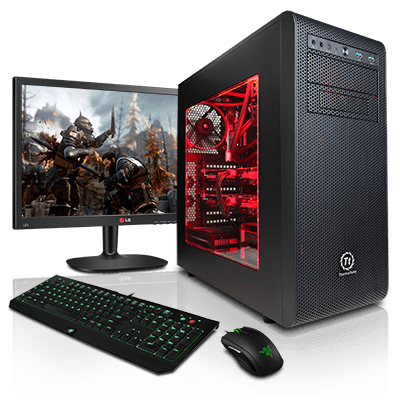